Why I’m Still Bullish On Housing… Plus: The “Stealth Correction” Means Value Is Back In Favor…

I had been waiting for this moment. You see, for the past year my wife and I have been talking about moving. After watching the value of our modest little home soar during the pandemic, the temptation was always there. But now, after giving it some thought – between living in a changing city that we no longer feel tied to and having a growing family, it just made sense.

Thankfully, I’ve been down this road before. But that won’t make it any easier, not in this environment.

According to Redfin, this January is shaping up to be the most competitive January housing market in history.

The culprits, as you can probably guess: record-low inventory and rising prices.

According to the Census Bureau, new housing starts in November climbed 12% to 1.68 million. That’s a step in the right direction. But as you can see from the chart below, we’ve had a chronic shortage of new housing starts since the financial crisis.

The Covid-19 pandemic, combined with record-low interest rates, brought a wave of unprecedented price appreciation (and buying activity) last year. But as this article in the Wall Street Journal points out, Millennials are “supercharging” the market by finally joining the ranks of homebuyers. As my colleague Jimmy Butts pointed out to his subscribers recently, CoreLogic recently reported that Millennials accounted for 67% of first-time home purchase mortgage applications and 37% of repeat-purchase applications in the first eight months of 2021.

To put it simply: this is an entirely brand-new cohort of buyers entering the market. I’ll let you guess what that means for demand (and prices).

True, rising rates may tamper some of the demand. As the Federal Reserve hikes rates (there could be three this year, maybe more) mortgage rates will undoubtedly rise as well. In fact this week, the average 30-year mortgage rate rose to 3.45%, the highest in nearly two years.

But if I were a betting man, I’d say things cool down from “red-hot” to merely “hot”.

I may dive into more detail on why I’m bullish on real estate and housing in particular in the future. But for now, suffice it to say that this is good news for homebuilders like Top Stock Advisor holding Lennar (NYSE: LEN).

While the company’s fiscal fourth-quarter results were hampered by supply chain challenges, it still managed to report $8.4 billion in revenue, which was a 24% increase over the same quarter last year. Earnings per share, meanwhile, increased 39% year over year to $3.91.

Both numbers were short of lofty expectations, but they’re still major advances. In the meantime, LEN has doubled since Jimmy added it to the Top Stock Advisor the portfolio in March 2020, beating the S&P 500’s 56% return. 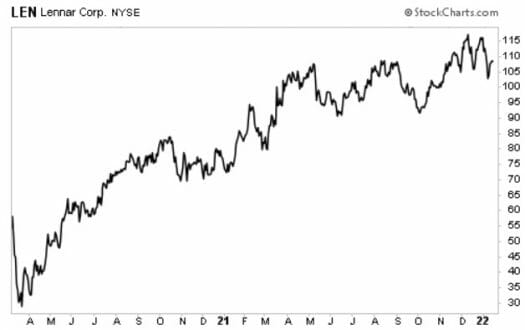 It still may take a few months to iron out the supply issues. But as the housing market remains strong, I think LEN will continue to deliver strong returns for quite some time.

In the meantime, I want to turn the rest of today’s issue over to my colleague Nathan Slaughter. Below, he discusses the “stealth correction” that’s happening in the market right now – and how investors can respond…

The Market’s “Stealth” Rotation Means Value Is Back In Favor…

We’ve seen quite the a role reversal in the markets recently.

Last January, as I reviewed what had transpired in the markets over the prior year, one trend was painfully clear: investors wanted nothing to do with value stocks.

That’s been the case for most of the past decade. Value was firmly planted in the backseat. Growth stocks were driving the market. So this wasn’t exactly new. But somehow the dichotomy grew even more pronounced during the pandemic. While the S&P 500 had gained 18% in 2020 and ended the year near a record high, not everyone was invited to the party.

The Russell 1000 Value Index (which tracks the performance of blue-chips like Walt-Disney, Verizon, and Bank of America) eked out a meager gain of just 1.2%. Quietly, the utilities, real estate, financial, and energy sectors all suffered negative returns for the year. 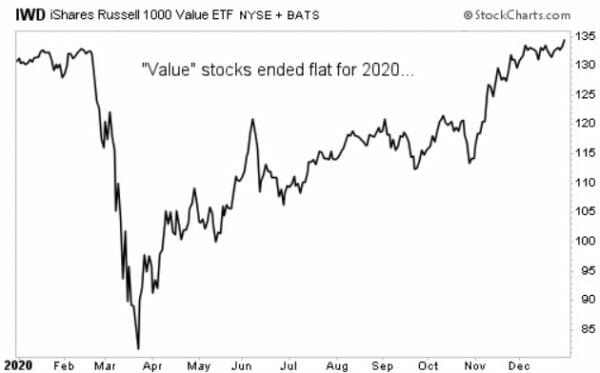 If you were an investor in the tech sector, you might not have even noticed this. The Nasdaq was roaring. But I sure did, considering these dividend-paying groups were well represented in my High-Yield Investing newsletter. The market had little interest in 3% or 4% dividend yields when stocks like Zoom Video (Nasdaq: ZM) and Etsy (Nasdaq: ETSY) were putting up gains of 300% or 400%.

Fortunately for us, many of the additions we made came right in the wake of the Covid-selloff, so we ended up profiting from the rebound despite the lackluster overall performance.

Fast-forward to today, and let’s just say that market leadership has changed like a capricious high school social clique.

Dividend-paying value stocks (led by energy and financials) are now back in vogue. Just look at Pioneer Natural Resources (NYSE: PXD), for example. This is a holding we’ve held over at my other premium service, Takeover Trader, since May of 2020. It’s ripped off a gain of more than 120%. 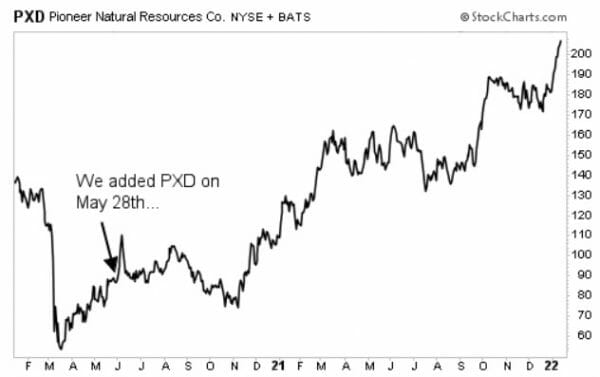 The Rotation Is Here…

It’s not uncommon for last year’s laggards to become this year’s leaders. Unfortunately, the reverse is also true. Case in point: Netflix (Nasdaq: NFLX) has retreated from a peak of $700 a few months ago to $533 today. Former highfliers like Shopify (Nasdaq: SHOP) and DocuSign (Nasdaq: DOCU) have come crashing back down, falling 35% and 57%, respectively.

Experts are calling it a “stealth correction.” Few realize it, but 40% of the Nasdaq components have lost more than half of their value from their recent peaks. Let me repeat: pick any two stocks from the Nasdaq, and odds are one of them is down 50% or more (particularly pandemic plays).

As much as I anticipated this happening, we’ve still been caught up in this downturn. While we’ve profited greatly from stocks like PDX and a handful of other names, some of our high-flying tech-oriented names have had some tough sledding.

I’m still a believer in some of these names — the innovation is just too powerful to ignore. Not to mention they’ll make for even more attractive targets for an acquirer at a cheaper price. But generally speaking, my confidence has not been shaken. These are proven businesses with durable competitive advantages with the potential to generate outsized returns on capital over the next few years. And in most cases, the selloffs have been overdone.

This “stealth” correction may not have run its course just yet. Many tech stocks were demonstrably overvalued and prone to profit-taking. At the same time, this sector is grappling with the prospect of multiple-rate hikes on the near-term horizon. It’s no secret that growth in the tech sector has been fueled by debt – and most companies will soon be paying more at the pump.

Here’s my advice: If you have some high-conviction tech names that you own right now, go back and reevaluate them thoroughly. There’s nothing wrong with taking a nice profit — or even cutting a loser or two. But if you still like the long-term prospects, be patient.

In the meantime, here’s another suggestion: why fight against the current? There’s nothing wrong with having a solid slate of dividend payers in your portfolio. In fact, the upside offered by these names — especially in light of this rotation — might surprise you. Case in point, banks should do well in this environment. I’m planning to put more emphasis on this group (as well as a few other areas of “value”) in the weeks ahead.

In the meantime, our 120% gain in PDX could be just the beginning — thanks to the “mother of all oil booms”…

One of the biggest values I see right now is in the energy sector. In fact, there could be a wave of deals in this sector that could give investors the opportunity for incredible gains…

And I’ve found one small company that’s right in the heart of all the action. In my latest report, I explain what’s happening — and how we can get in now before the rumor mill picks up, potentially giving you the chance to pocket triple-digit gains, overnight.

Check out my latest report to learn how to profit.