Are Cracks Emerging In The Market? Our Expert Says It’s Going To Get Worse Before It Gets Better

Are we stagnating? Is the dreaded recession we’ve been anticipating right around the corner?

These are the questions a lot of market watchers are asking themselves after yesterday’s GDP report.

Gross Domestic Product (GDP) fell by 1.4% for the first three months of the year.

But wait… I thought we were in recovery mode? Indeed, economists were looking for a growth rate of about 1%.

Well, there are plenty of directions in which to point the finger of blame for the disappointment.

For starters, there’s the Omicron wave of Covid cases that swept through the country last winter. The highly-contagious strain kept many workers and shoppers at home. Then, of course, there’s inflation. At 8.5%, we haven’t seen prices climb this quickly since 1982. To top it off, there’s the whole Russia/Ukraine conflict.

Many economists are striking an optimistic tone with the report, however, noting that the fundamentals of the economy (consumer spending and business investment) remain strong. It should be noted, though, that one more slip up like this would officially put the economy in a recession.

Anything from an overly aggressive move by the Fed to hike rates to increasing intensity in the hostilities in Ukraine could be just the thing that tips the scales.

I’m beginning to notice some cracks emerging in the market during this earnings season.

For example, Amazon (Nasdaq: AMZN) reported its first quarterly loss since 2015, thanks to rising labor and energy costs (as well as slowing online commerce). Shares are down about 15% as I write this.

There doesn’t seem to be an end in sight for the computer chip shortage, either, and it continues to be a roadblock to growth.

Case in point, Ford just reported a huge loss ($3.1 billion). Not counting special items (namely, its disastrous investment in electric truck maker Rivian), the company would have turned a $1.6 billion profit — and even then, that’s still 40% lower than a year ago. You can chalk a lot of that up to the simple fact that without computer chips, Ford just can’t do what it does best… make and sell pickup trucks.

Oh, and did I mention that Covid is making its way through China again? Yeah, there’s that. Much of the country is on lockdown again and is threatening to upend global supply chains once more (not that they’ve even fully recovered in the first place).

Some of you may remember two years ago when I pointed readers to some resources to monitor the global shipping traffic coming into the ports of Long Beach and Los Angeles. The situation would garner national headlines a couple of months later, as the lack of port workers caused an epic bottleneck of ships waiting to unload cargo. This time around, Shanghai is the one to worry about (for now), and the good folks at Statista have produced a rendering of the current situation at the world’s largest container port. 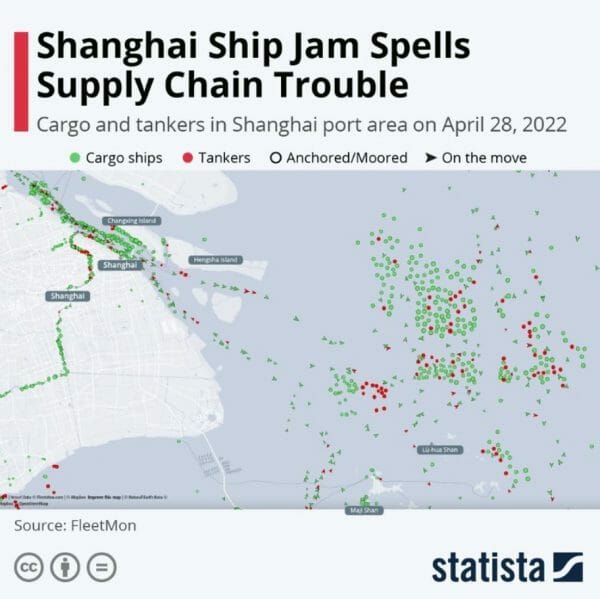 I don’t want to strike an overly dour tone with today’s issue. But you should know that there are some very real threats to the market right now. And to navigate them successfully, you’ll need clear eyes and a plan to come out ahead.

That’s why I’m handing the rest of today’s issue off to my colleague Jimmy Butts. He recently discussed his own (guarded) pessimism about the market with his premium readers – but offered a glimmer of hope.

The Market Turmoil Is Going To Get Worse. But It WILL Get Better…

It’s hard to believe, but at this point last year, the S&P 500 was up over 11% on its way to a stellar annual 29% performance. The biggest decline for the year was 5%.

What a difference a year makes. So far, 2022 has been a drastically different story…

We started with the first correction (defined as a pullback of over 10%, but less than 20%) in two years. Then we got a nice 11% rally in just two weeks. And now we’re drifting back toward that prior low.

The Nasdaq has been even worse. The tech-heavy index tumbled 20% in the first six weeks of the year. Then, it rallied 17% in two weeks, and then decided to it was afraid of those heights and is once again hovering around those previous lows.

And here’s the thing… I don’t think it’s going to be any easier trading this market going forward. In fact, I see more pain ahead.

Bad News: The Turmoil Is Going To Get Worse

As many of you know, I pen a newsletter called Capital Wealth Letter. That advisory is geared more towards long-term investing. I look for undervalued assets, major trends or themes, or what I’ve called “crisis investing” opportunities. We even dabble a little in cryptocurrency.

In my January 2022 issue, I told readers that I was concerned about the stock market. I stated that I was seeing “warning signs that indicated we could be in for a very rude awakening.”

I went into detail about why. But the short of it was that I was concerned about the winding down of the Fed’s massive money printing “experiment,” the trillions handed out from the government during the pandemic, and the eventual hike in interest rates.

The easy-money policy of the Fed is like heroin. It’s gotten us all extremely high, and I can only assume that we may have some withdrawals as these injections end, which the Fed has indicated they will by March.

The problem is that although the Fed indicated it would begin its tightening process by March, they have yet to actually turn off the spigots. As you can see in the Fed’s balance sheet, it keeps creeping higher. 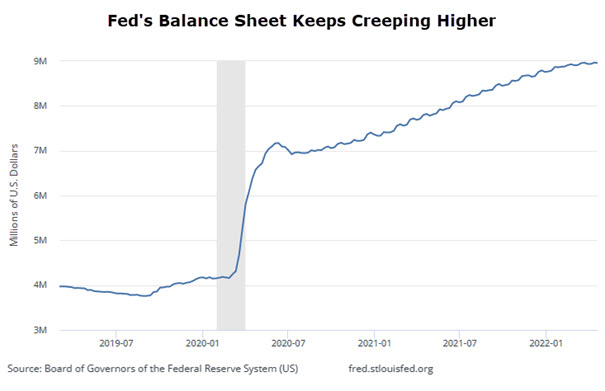 Keep in mind that it’s not just the Fed turning off the printing presses that will be a headwind for the markets. We have soaring inflation, which the Fed will attempt to combat by increasing interest rates. To top it off, the market is extremely stretched in terms of valuation. The cyclically adjusted P/E ratio (CAPE) for the S&P 500 is sitting at 33, which is more than double its historical average of 15.9. 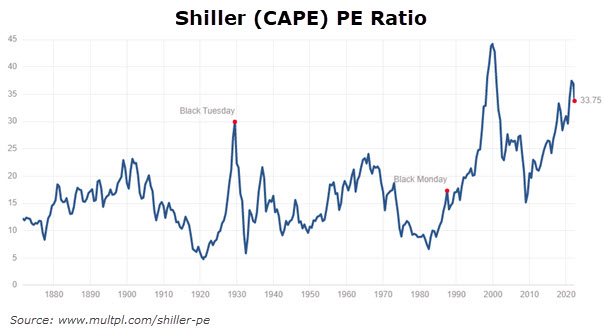 We’re already seeing big selloffs in many of the top tech names… shares of Netflix (NFLX) have been cut in half, Google parent Alphabet (GOOGL) missed earnings and traded sharply lower, and social media giant Meta Platforms (FB) is down over 50%.

It isn’t pretty, and it’s probably going to continue to be a tough market environment for the remainder of the year.

The Good News: It Will Get Better, So Get Ready…

Okay, enough with the doom and gloom…

There are some bright spots. For one, corrections and bear markets are normal. They happen. It’s just a matter of how we trade and survive them.

If earnings grow and prices fall, well then the market’s valuation will fall drastically, and it will no longer be “overpriced.”

When a bear market ensues, investors get chewed up and spit out. Most throw in the towel. When that sentiment reaches this point, that’s when a new bull market will be born. And we will be there to take full advantage.

Editor’s Note: Another bright spot in the market has been in the oil & gas sector – and there’s still time to profit…

Oil prices have been on a roller coaster ride. But the swings are getting smaller and less dramatic. That’s a good thing. The other bonus is that oil prices are still around $100 per barrel. That’s well above the “breakeven” price at which oil companies turn a profit.

I think the momentum in oil will continue to be in our favor, and I’ve offered a few ideas to profit. But my colleague Nathan Slaughter may have found a pick with the most upside of just about anything I’ve seen…

To get the full details on this “under-the-radar” opportunity, go here now.