Forget The Recession Debate. Here’s What You Should Focus On Instead…

Are we in a recession?

According to the Bureau of Economic Analysis, the U.S. GDP fell by 0.9% in the second quarter. In Q1, the economy shrank by 1.6%.

That’s the common understanding of a technical recession. But the National Bureau of Economic Research (NBER) gets the honor of officially defining (and declaring) recessions. And their definition is a little more complicated… 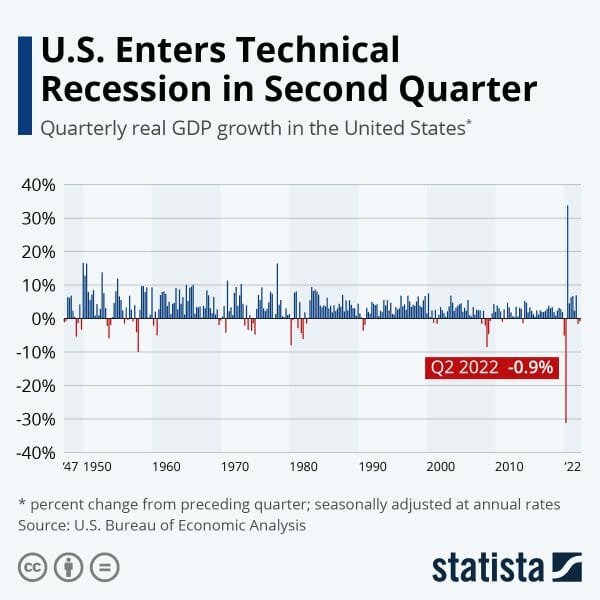 According to the NBER, a recession is “a period of falling economic activity spread across the economy, lasting more than a few months, normally visible in real GDP, real income, employment, industrial production and wholesale-retail sales” usually over a period of at least two quarters.

We usually don’t know when recessions start or end, until well after the fact – at least by the NBER’s metrics.

In other words, the NBER historically doesn’t officially declare a recession until we’re already well into one (and everyone knows it) – or it’s likely already over (or at least the worst part).

It’s worth wondering aloud… By the time it’s announced, what good does it do anybody?

This is where the tricky business of gauging sentiment comes in. Because if it feels like a recession to the average guy on the street, then it may as well be one.

Look, I get it. People want to know whether we’re in a recession or not because it can be painful. The Covid recession may have been short by technical standards, but tell that to those who lost their jobs, had businesses shut down, or watched their savings dwindle.

In economic terms, the Great Recession was even worse. But there’s good reason to believe the next recession (whether we’re in it now or not) won’t be quite like the last.

Even if we operate under the assumption that this is indeed a recession, we’re not seeing all the usual signs… at least, not yet. The employment picture is healthy – in fact, we’re on the verge of recovering the pre-covid total jobs number. Consumer spending is hanging tough, despite signs of weakness. Meanwhile, recent manufacturing data also showed growth.

What You Need To Focus On Instead

Here’s the thing… As investors, it’s not really worth arguing whether we’re technically in a recession or not.

Scoring political points may be fun, that’s not our business. Our business is making money.

And debating this can cause many investors to take their eyes off the ball. Instead, I want to turn your attention to this chart… 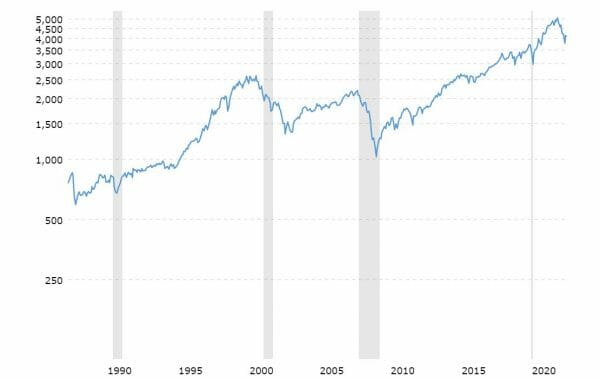 First, the long-term trend is up. Never forget this. The second is that many recessions end up feeling bad in the moment, but they usually last shorter than you think, and then we all get right back to business…

You won’t hear about recessions like the one in 1990 on cable TV. That’s because barely anyone remembers it. Instead, the nasty ones like ’08 get all the attention.

Is that how things will pan out this time? Only time will tell…

But the point is that the media has one agenda, and that’s to attract eyeballs and get clicks. That’s fine, but it doesn’t do anything for us as investors.

And while we don’t know what will happen, but we can make some pretty good guesses.

If you look at those grey bars on the historical chart of the S&P 500 above, then you can see that recessions were generally pretty good times to buy for long-term investors. The dot-com crash is an exception. It took years for the S&P to take out the previous high, and this was revered to as “the lost decade”.

But over the past 35 years, the market has treated investors exceedingly well — to the tune of a 1,200% return since 1987 (or 14.7% annualized). That period covers a dot-com crash, a Great Recession, and a global pandemic. It covers periods of wars, rising and falling rates, terrorist attacks, and contentious elections.

The point is, the bulls win in the end. Recessions are simply a part of the economic cycle.

I’m reminded of what my colleague Jimmy Butts told his Capital Wealth Letter premium readers back in 2019 when there was chatter about a potential recession. His words back then still apply today:

Now, if you’re overly concerned about your account at the moment, it means you may have too much exposure to equities. If that’s the case, then look at cutting some losers, and taking some profits off the table. Enough to get down to a position where you’re not losing sleep over the daily market swings.

[Our] investment timeframe is much longer than one day, one week, or one month. Getting caught up in the daily market chatter can not only make your blood pressure rise, but it can lead you to exit a position prematurely.

So while the pundits on TV debate whether we’re in a recession or not, here’s what you should be doing…

Focus on what you can control. Make sure you have enough cash to feel comfortable – and strike when an opportunity presents itself. Don’t over-allocate to any one company or industry. Trim losers from your portfolio. And most important of all, keep a cool head.

When the core of your portfolio is comprised of great companies that you bought for a reasonable price, you don’t have to get the exact bottom right. Sure, it may not always be a smooth ride. As Jimmy tells his readers, you also have to be willing to invest when others are afraid. You have to jump at the opportunities you find, even while others hesitate.

P.S. We’ve found the “next investment frontier” in technology — and early investors could make a killing…

I’m talking about the commercialization of outer space. It’s not as crazy as it sounds — and it’s all thanks to Elon Musk’s latest project, Starlink. It’s already rolling out across the globe, and it’s going to change the lives of millions of people (and make a fortune).

But there’s just one problem… It’s currently “off limits” to regular investors… Fortunately, we’ve discovered a little-known “backdoor investment” that can get you in on the ground floor, TODAY. (Without this “secret partner, Starlink will never get off the ground…)