Want To Find A Long-Term Winner? Look For These 7 Types Of Economic Moats…

It’s perhaps the most important thing Warren Buffett looks for in a potential investment. Whether you’re a longtime student of value investing or just starting out, the topic of moats is bound to come up at one point.

Does a particular stock have a wide moat, a narrow moat, or none at all? A firm grasp of this concept can mean the difference between success and failure for long-term investors.

At their core, economic moats are sustainable competitive advantages — factors that give a company a distinct edge over its rivals.

Competitive advantages can take many forms. But when a company enjoys a wide economic moat, rivals cannot easily emulate its business model. As a result, a firm with a distinct competitive advantage is in a much better position to continue earning above-average profits — thereby creating more shareholder value.

Below, we’ll outline seven of the most common types of economic moats. 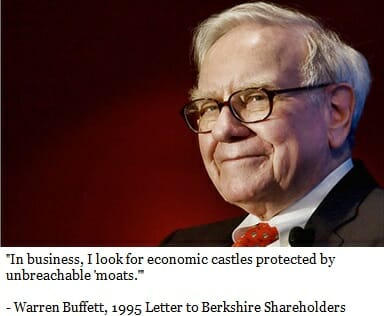 It stands to reason that highly competitive industries are generally less attractive (think price wars) than those where only a handful of players share the entire market. Therefore, investors should always determine how easy (or difficult) it is for new companies to enter an existing industry.

For example, it’s relatively easy to open a restaurant. But, on the other hand, it’s much harder to gather the technical expertise and multi-billion dollar R&D budgets necessary to become a large-scale pharmaceutical manufacturer.

All else being equal, looking for companies in industries where “barriers to entry” discourage would-be competitors from entering the business is preferable.

2. High Bargaining Power of a Supplier

To one degree, most companies depend on their suppliers. Those with a high degree of bargaining power over their customers typically enjoy a wide economic moat. Unfortunately, there is no formulaic method of finding these companies. Still, you’ll normally find this when a small group of vendors sells an integral product (with no alternatives) to a diverse group of customers.

Leading slot machine manufacturer International Game Technology (NYSE: IGT) is a textbook example of a supplier that wields considerable influence over its customers.

There’s a reason why slot machines dominate the floor space of virtually every casino in the nation: They are far more profitable than table games and generate the lion’s share of net gaming revenues.

There are only a handful of major players in the slot-making business. So casino operators trying to keep their loyal slot players happy have little choice but to give their business to IGT.

The importance of a popular and trusted brand name can’t be overstated. Companies that work hard to cultivate a positive brand image are usually rewarded with loyal customers that keep coming back for more. In many cases, those same customers are also willing to pay premium prices.

A classic example is Coca-Cola (NYSE: KO). With a name that people know and trust, the company has been able to leverage the popularity of Coke by expanding its product lineup and charging a premium over rivals. Apple (Nasdaq: AAPL) is another example that comes to mind.

Earlier, we explained why many companies facing increased competition either lower prices or surrender market share. However, what if there was something else that might prevent customers from abandoning ship?

When the cost (or hassle) of switching to a competing product or service is high, customers are sometimes inclined to stay put — even if they might receive a better deal from another company.

For most products, switching costs are minimal. However, this is not the case with other products or services. Think of a company like AT&T (NYSE: T). Changing cell phone service providers can be a pain, causing many customers to simply stay put. However, that leads to a recurring base of revenue that can be relied on each month.

It’s almost always beneficial to offer a product or service for a lower price than everyone else. This is true regardless of the industry. But it’s particularly valid when it comes to commodity-like products where it is difficult to distinguish one from another.

Price-conscious consumers will naturally gravitate to the companies that offer the most bang for their buck. Therefore, maintaining competitive prices serves as a durable competitive advantage that can dig a nearly impenetrable moat.

Some companies attribute their low costs to bargaining power with suppliers. Others point to such things as economies of scale or supply chain efficiencies. Retail giant Walmart (NYSE: WMT) benefits from all three factors.

There are numerous reasons why very few companies can compete with Walmart on pricing. Because of its immense size, the company enjoys unrivaled bargaining power over suppliers. Meanwhile, distribution efficiencies allow the company to drive prices to rock-bottom levels. In fact, Walmart can occasionally sell goods to the public at prices below what small retail outlets must pay wholesale.

Over time, this moat has kept competitors at bay (or forced them out of business entirely) and has helped Walmart grow to become the world’s largest retailer.

The so-called “network effect” occurs whenever an increase in a firm’s customer base can increase the value of a given product or service, which attracts more customers, which increases the value even more — and so on.

The best example of a company profiting from this economic moat is Amazon (Nasdaq: AMZN). Consumers who want to buy a particular product routinely turn to Amazon because it features millions of different products from various suppliers (including Amazon).

As the number of Amazon users increases, the harder it is for potential rivals to chip away at its lead.

Most companies that benefit from a wide economic moat fall into one of the six broad categories above. However, there are some with competitive advantages that are difficult to categorize.

For example, a pharmaceutical firm might capitalize on a key patent, or a software developer might hold valuable intellectual property rights. Sometimes, the deepest economic moats lie in the most unusual places.

In the case of garbage hauler Waste Management (NYSE: WM), government permits for landfills are hard to come by. Plus, they’re expensive to build, and nobody wants to live near one, which further deters competition.

Moreover, the company is opening up new business lines by investing substantially in renewable natural gas generation from its facilities. Add it all up, and this “boring” business has crushed the S&P 500 over the past 10 years… 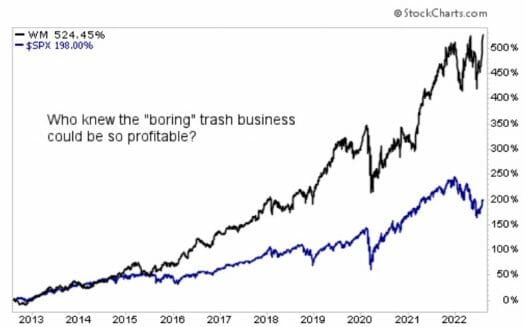 With nearly millions of commercial, industrial, and residential customers and a massive chunk of the nation’s disposal capacity, this vertically-integrated company will continue to generate cash for years to come.

We see it happen time and time again in the business world… yesterday’s leaders turn into tomorrow’s losers.

While no company is immune, moats make it possible to fend off the threat of competition. The companies that deliver the greatest gains to investors over time often have several “economic moats” working in their favor. And while this list is by no means exhaustive, keeping powerful advantages in mind as you search for investments can lead to stellar returns over time.

Editor’s Note: Even the whisper of a “mega-merger” can lead to enormous returns, so it can be extremely profitable to pay attention to this space…

According to our colleague Nathan Slaughter, companies are flush with cash and eager to fuel growth in this uncertain environment, and that means we could see a wave of deals happen in the coming months.

Over at Takeover Trader, Nathan has just pinpointed a potential takeover deal that could dwarf them all. Want to get in on his next big trade? Click here for details.