Nobody knew if it would work.

They all stood around a large dark oak table in the conference room. Silently passing around the results from the latest backtesting results. Each member engaged with the numbers staring up at them from the cardstock.

It looked too good to be true.

But they’d rigorously tested and re-tested the strategy. The results were impressive.

Within six months, the first issue of Maximum Profit went out to subscribers…

We are closing in on nearly a decade since the very beginning of Maximum Profit. I wasn’t a part of the original team that developed the Maximum Profit system. I was just fortunate enough to step in to pen the publication when my name was called (over seven years ago).

But here’s the thing nobody knows when creating — and thoroughly backtesting — a new investment strategy. Will it work in the real world? Will it perform worse, as good, or better than what the backtesting results show?

After all, a backtest is just that… a test. You don’t find the real answer until you go from the hypothetical to the real world.

How will it hold up when the market delivers its first jab? Its first gut punch? Its first uppercut?

Will it hold up?

You see, one of the most surprising — and quite frankly questionable at the time — results from the backtest showed that the Maximum Profit system almost completely sidestepped the market collapse during the financial crisis in 2008.

Of course, during the backtest, the Maximum Profit system didn’t walk away completely unscathed. It took some hits. But it quickly moved to cash five months before the market bottomed in March 2009.

The S&P 500 lost roughly 38% in 2008. According to the back test, the Maximum Profit system essentially broke even that year.

You can probably imagine a quiet uncertainty in the air a decade ago as each person in the conference room focused on the results from 2008. Remember, this was 2013, and the financial crisis was still a festering wound that people were healing from. In the back of everyone’s mind was, “could this system really help avoid a stock market collapse?”

The Biggest Takeaway From That Meeting A Decade Ago

I came to StreetAuthority from the wealth management side of the business less than one year after the official launch of Maximum Profit.

I was a relatively young, arrogant kid — although I’m probably still arrogant, just no longer a kid. But when you’re young, it’s hard to really grasp the risk side of things. I was probably more like the “Buy-the-dip, meme stocks, stocks never go down” group of investors that have recently surfaced (and since largely faded) than I was worried about risk or cutting losses.

But thanks in large part to the Maximum Profit system, I’ve since learned the power of keeping losses small.

I’ve also learned that the biggest testament to not only the original people in that conference room, but the core of what Maximum Profit is about… is avoiding losses. Helping subscribers not lose their life’s savings.

You see, the backtest results were outstanding. It crushed the S&P 500 during that 10-year back test, something like 5-to-1. But it wasn’t the winners that had everybody excited. It was the slight possibility of not suffering life-altering losses during the financial crisis that made people nervously excited.

As any longtime reader of Maximum Profit can tell you, avoiding massive losses is perhaps more paramount to our success as traders than finding the next big winner. That’s because we know the psychological damage massive losses can do to a person. It’s extremely hard to recover from. Many people never do. And if you run out of chips, you can’t play the game.

This was a question that a former publisher asked me a long time ago. I essentially had to defend why Maximum Profit was beneficial to readers. He was an old-school gentleman that, like many people, had a hard time grasping momentum investing.

The easy answer to this question was that Maximum Profit is a “proprietary” stock picking system. But nowadays, it seems everybody touts that they have a “proprietary” system or some “holy-grail” indicator. And to be honest, to me, that’s not even close to the best thing about the Maximum Profit system. Yeah, sure, we have our own algorithm that was developed — and thoroughly tested — in-house a decade ago.

But the real beauty of the Maximum Profit system is that it helps solve two of the biggest problems investors face: Where do I start, and which stocks do I buy? And when do I sell?

The Maximum Profit system provides clear buy and sell signals. It takes all the guesswork out of the game. Perhaps, even more importantly, is that it creates a strategy that almost completely takes the emotion out of investing.

As I’ve repeatedly talked about in these pages over the years, emotion has shown to be the biggest detriment to individual investors’ portfolio performance. The emotion of clinging to a stock hoping for it to rebound. The fear of cutting a loser short because it means admitting defeat. The fear of losing all your gains, so you cut your winners too early. The list goes on.

The Maximum Profit system takes all those fears out of the equation.

One final thing, and I’ll step off my soapbox…

To answer that question nobody asked in that conference room that day. Could this strategy help investors avoid a major market calamity?

Yes. It has proven that it can help investors avoid massive market selloffs.

For reference, the S&P 500 peaked on September 20, 2018 — we didn’t know that was the peak at the time as it was still trading right near that all-time high.

From that September peak to October 26, 2018, the market fell roughly 10%. At the beginning of November, we were cutting losses (keeping them small) left and right. At this point, we had moved from that over 80% allocated to stocks to just 46% stock allocation.

In other words, we doubled our cash position.

The market gyrated for much of November, and we continued to book profits and cut losses as our sell signals were triggered. By the end of November, we only had one-third of our exposure to the equities market.

The market quickly tanked throughout December. We pulled our profits — like the 70% gain in defense contractor Heico (NYSE: HEI) and the 22% gain in Repligen (Nasdaq: RGEN).

By the end of December of 2018 we had trimmed our stock portfolio down to just 23%. 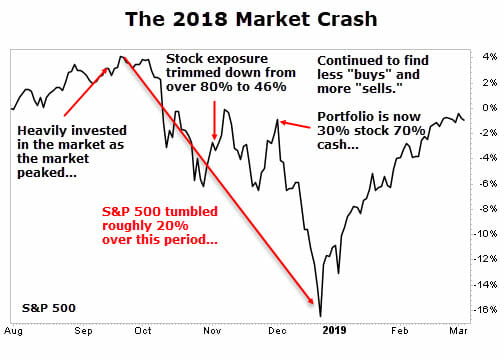 As you can see, the market quickly rebounded, and as momentum shifted, we added stocks back to the portfolio. In fact, we added six new stocks in January.

A similar story happened during the violent market crash that unfolded from February 2020 to March 2020. By March 10, we only had five stocks in our portfolio, or 17% allocated to stocks (my cash-equity balance is based on a maximum portfolio holding of 30 stocks).

A few days later, we closed out the rest of our holdings. 100% cash at this point.

On March 19, 2020, the Maximum Profit system flagged one stock as a buy — DocuSign (Nasdaq: DOCU). The market bottomed the next day, March 20.

I wish I could say that my system knew the next day was the market bottom, but it didn’t. That was just pure dumb luck on the publishing schedule.

If you don’t recall, DocuSign ripped off a 200% gain in just five months after we bought it.

We are once again in a bear market. Although, this one doesn’t seem to have the quick “V” recovery like the last two.

The Maximum Profit system has had us primarily in cash for most of this year. Our strategy has changed slightly. Instead of moving to all cash, we’re focusing on hitting singles and doubles (pulling quick profits).

Yet, we’ve avoided disaster. The Maximum Profit system has once again proven that it can help us navigate troubled waters. It has done — and will continue to do — what those folks in the conference room a decade ago had secretly hoped it could do… Avoid financial disaster.

Don’t get me wrong… Finding winning picks is nice. (We have our fair share of those over at Maximum Profit, too.) But avoiding large losses is much more important — and it’s perhaps what I’m most proud of about this system.

Whether you’re a part of our crew over at Maximum Profit or not, do yourself a favor and cut a losing pick early before it turns into a large loss. Set hard stops (or mental stops) and enforce ruthless discipline on your portfolio. You’ll be glad you did in the long run.

P.S. Okay, I’m hopping down from my soapbox. I know you guys usually came here for stock picks. If you’d like to learn more about the Maximum Profit system, you can shoot me an email. I’ll also make sure you get on the waitlist for the next time we open access to the public.

In the meantime, everyone knows about the furious competition taking place to see who will take the top spot in space. We think Elon Musk is in the lead right now, thanks to his latest brainchild: Starlink.