We’ve traded one Chinese threat with another…

For the majority of 2019, we had the trade war hanging over the market. The United States and China swapped tariff punches that caused the market to bob and weave. Then we had the phase-one trade agreement signed at the beginning of the year.

On Valentine’s Day China will reduce tariffs on roughly $75 billion of U.S. goods. The United States will also lower tariffs on some Chinese goods. But as we put the trade war behind us, another threat — the coronavirus — has emerged.

According to the latest figures, there have been 400,000 confirmed cases and 908 deaths from the outbreak. (Those numbers continue to change by the hour.)

As news of the coronavirus outbreak spread last week, the S&P 500 tumbled. However, it has quickly regained its footing and climbed to new all-time highs as company earnings and jobs news overtook the market.

But does that mean we are in the clear? Will this bull market resume, or are we in for a market correction?

Of course, no one knows the answer to that. But there’s one thing I’ll be keeping a close eye on to tell me if these new market highs have the strength to continue marching higher — or if there’s weakness lurking beneath the surface…

That indicator is the Advance-Decline Line (AD Line). This is a breadth indicator that I’ve talked about before. It’s performed well for us in the past and should provide some insight into what’s to come.

As a quick refresher, this breadth indicator basically measures how many stocks are rising compared to falling. I like to think of it as a telling sign of what’s going on beneath the surface.

For instance, if the S&P 500 is hitting new highs, you would look at this indicator to make sure it, too, was advancing and hitting new highs. This would show strong participation in the market and confirm the bullish trend. However, if the AD Line fails to keep pace with the underlying index, this is a sign of weakness in the market, signaling a bearish divergence.

Let’s look at an example…

The chart below shows two bearish divergences in the NYSE AD Line from June to November 2007. The NYSE Composite moved to new highs in July; however, the AD Line peaked at the beginning of June. This tells us that there wasn’t strong participation in the new high and thus sets up the first bearish indicator. 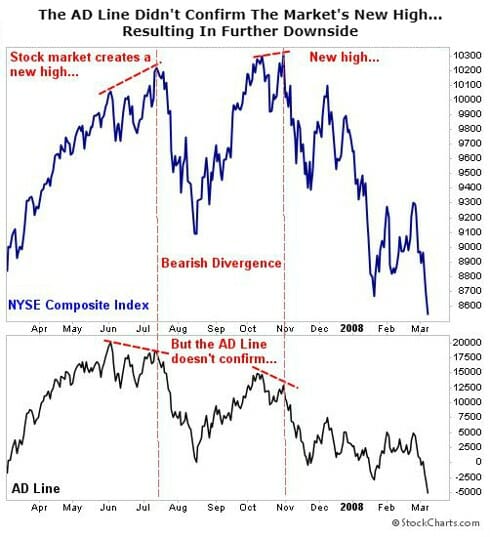 As you can see, the NYSE Composite Index fell over the next couple of months, but then it surged to new highs in October. Once again, the AD Line fell well short of its July high, forming another bearish divergence.

A more recent example is the fourth quarter of 2018 — the last time I highlighted this breadth indicator.

In late September 2018, the market marched on to new heights. However, this wasn’t confirmed by the AD Line, which was showing weakness in the market. 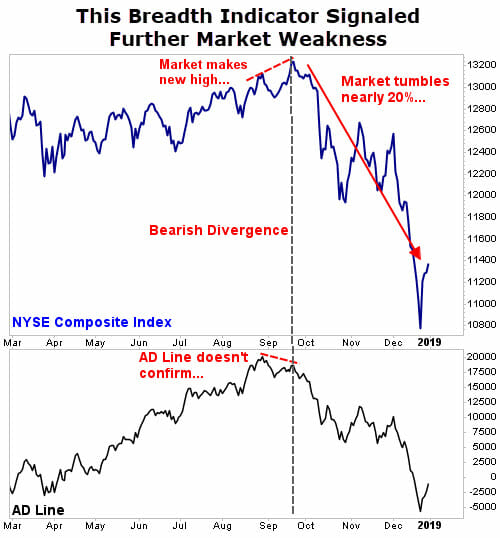 As you can see, the market continued to hit new highs in late September 2018. But below the surface, not as many stocks were also climbing. This bearish divergence gave us an advance warning, as the market fell nearly 20% by year-end.

Here’s where we are today… 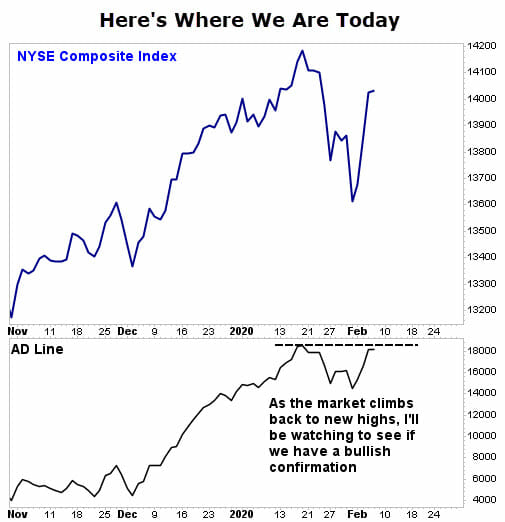 As stocks make their way back to new highs, I will be watching to make sure the AD Line follows suit. Should we see a bearish divergence, I will be more proactive in booking winners, and cutting losers short.

I’ll keep you posted on any major moves I see. In the meantime, if you’ve been wondering who will win the streaming wars (Netflix, Amazon, Apple, etc.), then you need to see this…

As you probably know already, every streaming TV company on Earth is raging all out war to conquer your living room. And it’s about to get bloody… But we have the inside scoop on who will come out on top. And there’s one quick trade you MUST make before February 20 to make a killing. Go here for the details…