Why ‘Big Blue’ Is Still A ‘Buy’ Today

In a low-yield market like the one we’ve had the past few years, there’s a common problem many investors face.

You’re scanning the market, looking for a solid high-yield stock to buy. You come across a company – a household name in fact. Upon further investigation, you see the stock’s yield. It’s nice and high.

Your eyebrow raises. Something must be wrong. This is just too easy. But since high yields are so rare, you decide to dig further.

That’s the situation may investors have faced when thinking about IBM (NYSE: IBM) the past few years.

But Big Blue has had its fair share of struggles. The company was slow on the take to a lot of big technological developments over the past few years.

But as one of the most storied names in American business, investors are right to be interested in the stock – and its 4.2% yield.

After all, IBM has a colossal patent portfolio (more patents than any other U.S. technology company, in fact). It still houses innovative research laboratories… Then, of course, is the world-famous super-computer and cognitive platform (Watson).

Not to mention, in recent years there has been a major effort to turn the ship around, with investments in modern technologies and a focus on improving operations for the future. This culminated most recently in the $34 billion acquisition of Red Hat, a cloud computing software provider, back in July 2019.

The question has always been… can a ship this large turn around in time to survive and reward shareholders in the process?

I last checked in on IBM back in November. But since then, there have been a few developments that may add clarity to the picture. Let’s take a look…

Big Blue just reported fourth-quarter revenue of $21.78 billion, compared with $21.76 billion a year ago. That tiny increase is little more than a rounding error. Nevertheless, a positive number is a positive number.

It’s also a pleasant surprise, considering IBM spent several years without a single quarter of year-over-year revenue growth. That dubious streak was snapped in 2018, but the momentum was short-lived. Before this, the top line had shrunk for five straight quarters.

It’s worth noting that IBM has aggressively tackled debt, eliminating $10 billion since the Red Hat deal closed. That’s a testament to the firm’s strong free cash flow, which totaled nearly $12 billion in 2019.

The company returned $7.1 billion of that to shareholders ($5.7 billion via dividend distributions coupled with $1.4 billion in share repurchases). 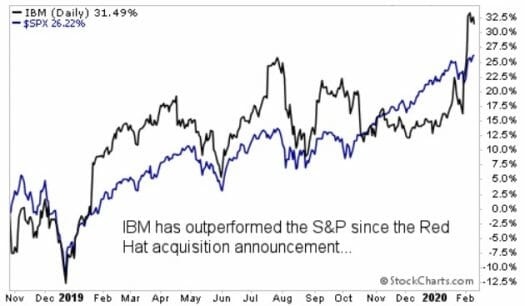 One quarter does not a trend make. And IBM hasn’t yet conclusively proven that it can sustain growth.

Still, this was a big step in the right direction. Looking ahead, the company issued upbeat earnings guidance for 2020. It’s anticipating a profit of $13.57 per share this year, comfortably north of the consensus target of $13.33.

In the wake of fourth-quarter results, at least three Wall Street analysts raised their target prices. The market has also cheered news that fresh new leadership may take the company in a different direction. After eight years at the helm, Ginni Rometty will be stepping down as CEO in April. Her successor will be Arvind Krishna, who is currently in charge of the firm’s cloud computing division.

After an up-and-down 2019 campaign, IBM shares have gained ground solidly in 2020, advancing more than $13 per share to a recent high near $156. The surprise revenue beat and healthy 2020 earnings outlook reaffirm my long-term “Buy” rating on the stock.

P.S. If you’ve been wondering who will win the streaming wars (Netflix, Amazon, Apple, etc.), then you need to see this…

As you know, every streaming TV company on Earth is raging all out war to conquer your living room. And it’s about to get bloody… But we have the inside scoop on who will come out on top. And there’s one quick trade you MUST make before February 20 to make a killing. Go here for the details…