The Streaming War You Probably Don’t Know About…

The streaming wars are heating up…

I’m not talking about the battle between traditional TV streaming services like Netflix, Hulu, Sling, Disney+, or Amazon Prime.

I’m talking about live streaming platforms for gamers. And it’s all thanks to a guy named Tyler Blevins.

You see, no one is bigger in the gaming world than Tyler Blevins, who goes by the name of “Ninja” online.

The streaming war really kicked off in earnest last year when Blevins (“Ninja”) jumped from one streaming platform (Twitch) to another rival. That platform, called Mixer, is owned by Microsoft (Nasdaq: MSFT).

Why The Video Game Streaming War Is A Big Deal

Why is this such a big deal, you might ask. Well, Blevins is arguably the most popular gamer in the world. The 28-year-old made around $17 million in 2019. On Twitch, he had 14 million followers. He’s also sponsored by Adidas and Red Bull.

Twitch is the leader in the video game streaming industry — you can think of Twitch as the “YouTube” for gaming. It commands more than two-thirds of the market. Every day, hundreds of thousands of people log on to Twitch to watch others play video games.

The person playing the video game has a microphone and camera on him or her, and a small window in the corner of the screen shows the gamer (so you can see their reactions and listen to their commentary) as they battle against their opponents. It’s as if you were sitting there in their living room with them.

In August of 2019, Blevins announced he was leaving Twitch for Mixer. Of course, he didn’t jump ship for nothing… his multi-year contract will reportedly pay him between $20 million and $30 million to simply switch platforms.

Other gaming platforms have witnessed the move and pulled out their checkbooks to bring over professional gamers. YouTube — owned by Alphabet (Nasdaq: GOOGL) — Facebook Gaming, and Mixer have all dangled massive contracts in front of the biggest gamers to elevate their platforms and eat away at Twitch’s market share.

Why All This Matters

If you’re not a “gamer,” you might think this is all preposterous. After all, who in their right mind would pay a kid millions of dollars to play video games all day? And thousands – no, millions – of people eagerly watch this stuff?

But here’s why all this matters…

People spend millions of hours online watching others play video games every day, which of course translates into billions in advertising revenue for these platforms.

Think about the companies behind these video game streaming platforms… we have Microsoft, Amazon, Alphabet, and Facebook. (Even Apple is reportedly looking to break into the gaming industry.)

These aren’t some no-name companies. These are the largest corporations in the world. They know what they are doing. And they’re all investing hundreds of millions into the gaming industry. (The gaming industry is already bigger than Hollywood – and growing at a compounded annual rate of 21%.)

The Rise Of Esports As A Multibillion-Dollar Business

The rise of platforms like Twitch and Mixer has helped transform video gaming into a spectator sport. This competitive gaming is more commonly known as “esports,” and it’s growing like a weed.

Just like “March Madness” for college basketball or the Super Bowl for professional football, esports now boast qualifiers, events, and massive championship tournaments. And they pay out handsomely.

What’s more, these tournaments attract massive audiences. According to gaming and esports analytics firm Newzoo, the total audience for esports will reach 645 million viewers by 2022. That’s roughly double the population of the United States. For comparison, about 100 million people tune into the Super Bowl each year. 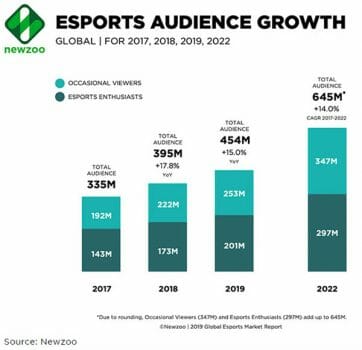 While no one esport tournament has attracted 100 million viewers like the Super Bowl, it’s getting close… For instance, the 2018 Mid-Season Invitational, an esport tournament featuring the game League of Legends, had around 60 million unique viewers.

With viewership comes bigger paydays for gamers, better venues, and even scholarships. There are now dozens of colleges and universities that have an esports program, where kids can land scholarships to play video games competitively.

The esport movement is fantastic for not only for professional gamers and streamers, but also for the future of gaming. The surge in popularity of esports has even grabbed the attention of high-profile billionaires, entertainers, and athletes. Mark Cuban, Michael Jordan, hip-hop superstar Drake, Shaquille O’Neal, and New England Patriots owner Robert Kraft have all invested heavily in esports.

There’s even an esports stadium in Arlington, Texas. The 100,000 square foot venue dedicated to esports hosts numerous tournaments and championships, including the championship for the popular Madden NFL video game. 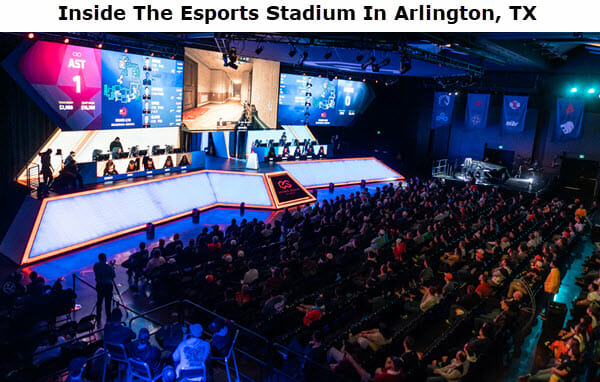 How To Profit From The Gaming Evolution

Now, here’s where I’m going with all this.

We can’t invest directly in Twitch. It was purchased by Amazon (Nasdaq: AMZN) in August 2014 for $970 million. That investment is paying off in spades… In 2019, it’s estimated that Twitch generated more than $1.5 billion in revenue.

But if you remember, last week I wrote about the video gaming industry as a whole. I mentioned that it was poised to grow into a $200 billion industry within the next two years. In fact, it’s already bigger than Hollywood – and growing at a compounded annual rate of 21%.

But the real winners of this massive video game movement are the companies creating these addictive games.

And that’s where we want to be invested…

Activision Blizzard (Nasdaq: ATVI) makes the popular games Overwatch, Call of Duty, World of Warcraft, HearthStone, and dozens of others. It’s the largest of the three companies with a market cap of $45.8 billion. It’s generated $5.8 billion in sales in the last 12 months and $1.8 billion in free cash flow.

Electronic Arts (NYSE: EA) owns established brands such as the soccer game FIFA, Madden NFL, The Sims, Battlefield, and newer releases of Apex Legends (their version of Fortnite), and Anthem. The video game company sports a market capitalization of $33.1 billion. It’s generated sales of just over $5 billion in the last 12 months and free cash flow of about $1.8 billion.

Take-Two Interactive (Nasdaq: TTWO) publishes the popular games Grand Theft Auto, Red Dead Redemption, and NBA 2K. However, Take-Two’s games haven’t quite cracked into the esports arena like its peers. It’s the smallest of the three companies with a market capitalization of $14.2 billion. In the last 12 months, it’s pulled in $3.1 billion in revenue and $1.1 billion in free cash flow.

I’m going to save my favorite pick of the three for my premium Top Stock Advisor readers. But I think all three of these companies will do well as the gaming evolution progresses.

I encourage you to research this space further on your own. And stay tuned. I’ll likely have more to say on this topic in the weeks and months to come. This trend is just too big to ignore.

In the meantime, we just published a brand-new report about the other streaming wars – the one everyone already knows about…

I’m talking, of course, about the one between Netflix, Amazon, Apple, and many, many others for control of your living room.

But what you may not know is that it’s about to get bloody… But we have the inside scoop on who will come out on top. And there’s one quick trade you MUST make before February 20 to make a killing. Go here for the details…