Yesterday, my colleague Jimmy Butts wrote about Tesla’s (Nasdaq: TSLA) inexplicable rise. In that piece, he talked about how the company’s stock has outstretched its fundamentals by a long shot.

Using Tesla as a hypothetical example, here’s what he wrote about the fundamental picture:

In its most recent quarter, Company A generated $7.4 billion in sales. This was a 2.2% increase over the same quarter a year ago. However, gross income was only $1.4 billion, which leaves it with a gross margin of 18.8%. Operating profit came in at just $347 million, which means its operating profit margin is just 4.7%.

Looking at its balance sheet, we see that it has $6.5 billion in cash on hand and $13.4 billion in total debt.

It should be noted that over the last three years (12 quarters) Company A has only reported a profit four times.

As Jimmy rightly pointed out, there’s just not a whole lot to write home about when it comes to Tesla – from a fundamental perspective. And from that perspective, knowing all that, how could you possibly justify the stock chart below? 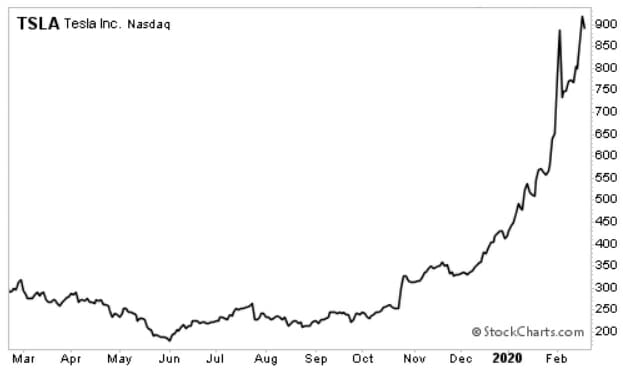 To recap further, here’s what he said about the stock’s incredible rise:

When you look at investing from this viewpoint, it almost seems silly. It just doesn’t make sense why a company that burns through cash, barely turns a profit, has meager sales growth, and had “record” deliveries of 112,095 vehicles in the fourth quarter, has a market cap of more than $138 billion. That’s four times larger than Ford (NYSE: F), a company that sold more than 1.3 million vehicles in the fourth quarter.

We Can Still Benefit From Tesla’s Rise

Now, I don’t bring all this up to simply rehash my colleague’s beef about Tesla. I share many of the same concerns. The fact of the matter is, the stock did what it did. There’s nothing we can do about that.

But consider this… TSLA’s incredible rise demonstrates one thing: interest in electric vehicles has arguably never been higher.

Say what you want, but Elon Musk, Tesla’s eccentric founder, is unquestionably responsible for raising the consciousness (and paving the way for) electric vehicles (EVs).

And roughly one decade after Tesla first brought EV vehicles to the market, other manufacturers are beginning to ramp up their EV production. Nearly every major automobile brand (Ford, VW, Toyota, BMW, etc.) is gunning for Tesla now. All of them either have an EV in production or one in the works. Whether Tesla is able to survive the onslaught that’s about to come its way over the next couple years remains to be seen.

Yet no matter how you slice it, the electric vehicle/battery space does have potential.

So the question is, are there some other beneficiaries that are worth looking at? Is there a way we don’t have to pick a winner? A little-known company that’s involved somewhere along the supply chain, perhaps?

With a surging EV market, the demand for lithium batteries is also increasing. (For a full write-up on lithium and its promise, read Jimmy’s article here.)

And Jimmy and his Top Stock Advisor readers own one of the top lithium producers in the world: a company called Albemarle (NYSE: ALB).

Jimmy and his subscribers bought Albemarle last October. Shares had tumbled more than 50%, thanks to a plunge in lithium prices. In fact, shares were trading at their lowest valuation in five years. 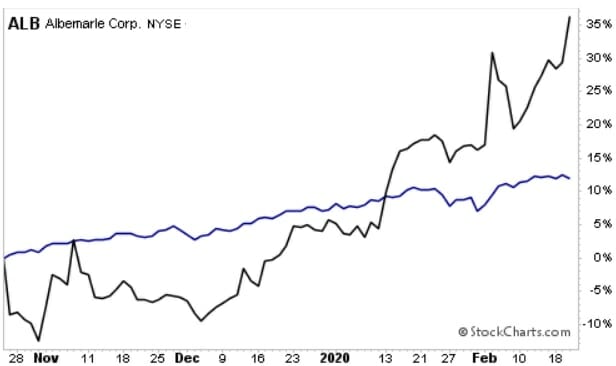 Now, at recent prices around $94, the stock is trading above Jimmy’s original “Buy-Under” recommendation of $75 per share. But the stock trades for much cheaper than Tesla. And unlike Tesla, it actually makes money on a consistent basis.

Bottom line, if you’re looking for a play on EVs, this is one worth looking into further. The tailwinds behind EVs and lithium demand should continue pushing the stock to new heights.

P.S. Jimmy and his team have just put the final touches on a brand-new research report that I think could be the most lucrative opportunity of 2020…

In short, the report is about a little-known satellite company that quietly purchased an Internet tech startup in 2019 at a bargain-basement price. Wall Street barely took notice… But according to our research, this company is sitting on a potential $10 billion windfall.

How do we know this? Because, unlike the analysts on Wall Street, Jimmy and his research team actually did the homework… And this company is sitting on one of the most valuable hidden assets we’ve ever seen. There still time to get in before the crowd catches on — so go here to learn all about it right now.