These Two Tech Giants Are Teaming Up (For Now)

The S&P 500 has made a strong comeback — up nearly 23% — from its March 23 lows. It’s one of the fastest (and strongest) rallies we’ve ever seen in market history.

But don’t think we’re out of the woods yet. It’s still down 16% from its all-time high on February 19. And we’re about to get a slew of data that’s going to rattle investors… 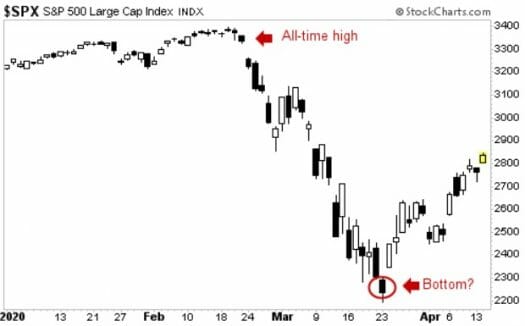 This earnings season will give us our first glimpse of how shutting down the economy has really impacted businesses. As my colleague Nathan Slaughter pointed out recently, it’s probably going to look ugly.

Still, as I’ve said before, now is the time to accumulate cash and make a watchlist. We’ll make it through this rough patch, but it’s going to take some time.

Speaking of which, I’ve been doing a lot of reading lately, as you can imagine. And one story I came across recently just further reinforces an idea I’ve been telling my Top Stock Advisor subscribers about for years…

Innovation Will Lead The Way

One of the ways we’ll beat Covid-19 is with technological innovation. And a rare partnership has emerged on that front that could be an important tool in combating this pandemic. Apple (Nasdaq: AAPL) and Google parent Alphabet (Nasdaq: GOOGL) announced they would develop technology for their smartphone platforms that will alert users if they have come into contact with a person with Covid-19.

The technology is known as contact-tracing. It’s designed to help “flatten the curve” by alerting users if they should quarantine after contact with an infected individual. Of course, folks must opt into the system. But it has the potential to monitor about a third of the world’s population.

Say two people meet to chat for a few minutes. In the background via Bluetooth, their smartphones exchange anonymous identifiers to register that they have been in contact. These digital keys change every 15 minutes or so and remain on these people’s devices to preserve privacy.

Several days later, one of these individuals is diagnosed with Covid-19. The person enters the results into a health-agency app on their phone. The system then asks for this user’s consent. If granted, the person’s smartphone sends a record of the other mobile devices that have been in close proximity. This information is stored on a remote server.

Meanwhile, the other person’s phone checks the server periodically to see if any identifier keys have associated with a positive Covid-19 diagnosis. The phone downloads all positive keys and matches it to the key belonging to the individual from the original meeting days earlier. This sends a notification to the other person’s phone with information from health agencies about how to quarantine or self-isolate.

It’s a controversial technology that will likely garner scrutiny from regulators as it involves sharing sensitive health information from billions of people, as individual privacy will be a top concern.

The technology is expected to be ready by mid-May. Of course, this by itself isn’t reason enough to buy either AAPL or GOOGL. But it’s just further demonstration of the level of innovation within both of these companies – and why they’re good long-term bets for investors.

With more than $100 billion in cash on hand for AAPL and $119 billion for GOOGL, there’s no question that these are two companies that you’ll want to own as we come through this crisis. In fact, they may even emerge stronger once this is all over. Regardless, it’s just further proof that these are the kind of companies you want to own “forever” – because they survive (and even thrive) in good times and bad.

Speaking of innovation, I just wrapped up one of the most interesting research projects with my staff that we’ve ever done…

While the world has been focused on Covid-19, I’ve been telling my readers about a small tech company that published something hidden within the footnotes of its regulatory filings that could be worth billions…

In short, this company paid what I believe to be pennies-on-the-dollar for an asset that’s going to help usher in a wave of innovation around the globe. To get a full briefing and learn how you can profit, check out my report.