One Way We Took Advantage Of The Market Chaos

The struggles of energy stocks have been well documented. The coronavirus outbreak demolished confidence in just about the entire sector as oil prices cratered.

But if you remember, back in March I told readers that it was time to go shopping. I even offered a few suggestions for a watchlist over the next few days. That was shortly before oil futures contracts went into negative territory for the first time ever.

But I’ll point you to what I said back then:

That’s what happens during these indiscriminate market bloodbaths. Investors sell first and ask questions later. Trading is based on emotion rather than fundamentals. And that’s why, once the dust settles, there are great bargains to be had.

Crude has since staged a powerful recovery. Benchmark West Texas Intermediate crude prices rebounded to $35 per barrel on production cuts and hopes that a re-opened economy will stimulate demand. 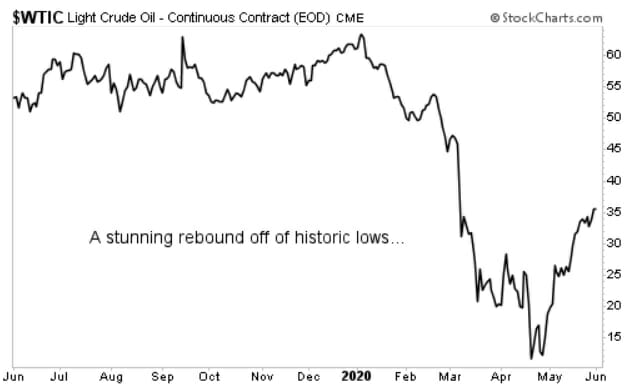 One Way We’re Profiting From The Stunning Rebound

At the end of March, I wrote a piece about my frustration with the situation – and how I was taking advantage. I said that I wasn’t panicking – and that you shouldn’t, either:

That doesn’t necessarily mean the worst is over. But we’re looking at once-in-a-generation valuations in some corners of the market.

So get ready to act. We’ll get through this crisis together as a nation. And a few of us will look back on this and be glad we kept our heads and got in at these levels.

I hope you took that advice to heart. Because over at High-Yield Investing, we’re already reaping the benefits.

For example, one energy stock I bought during the March bloodbath was Oneok (NYSE: OKE).

Of course, Oneok is primarily involved with natural gas gathering and processing. It helps feed natural gas liquids (NGLs) via pipeline to new petrochemical plants on the Gulf Coast. But natural gas is often produced as a byproduct of oil drilling – hence the earlier fears.

Unfortunately, that period ended March 31 gives little insight into how things look today. Management is hesitant to officially issue 2020 financial guidance, given the number of variables involved. However, it has pushed the pause button on several projects to curtail spending. After doling out $950 million in the first quarter, it’s targeting $1.6 billion for the year – implying a Capex budget of just $650 million over the next three quarters.

In other words, the original outlook for 25% growth has been pared back to around 8% growth. 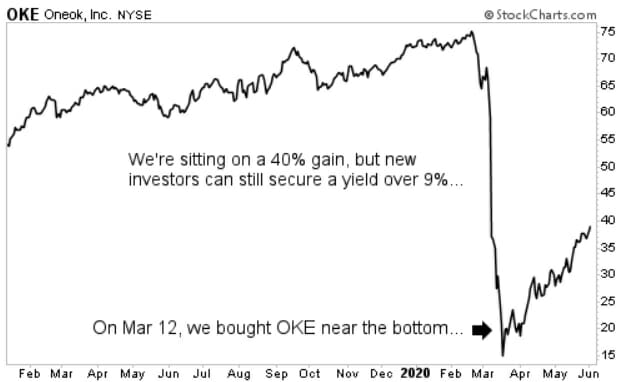 You would assume from the major plunge in OKE stock that cash flows are expected to dry up this year or even turn negative. That’s hardly the case. They will still expand, just not quite as fast as expected.

Keep in mind, the company was already maintaining a comfortable dividend coverage ratio of 1.38, generating $1.38 in DCF for every dollar it distributes. And the balance sheet is sound, with over half a billion in cash and a $2.5 billion untapped line of credit.

Thanks to the overdone selloff, the yield on this well-covered dividend shot up into double-digit territory. And we’re already up 40% on our position.

But that doesn’t mean it’s too late. With a yield of nearly 10%, this industry leader is now trading at just 7 times cash flow, a steep discount to historical norms. I consider OKE a compelling buy at this level.

P.S. There’s still a ton of value to be had in the market. So let me ask you a question…

How can a company like Apple barely bring itself to pay out a mere 77 cents every four months? What a joke! Frankly, investors deserve more from the world’s richest company. Much more. And that’s exactly where this little-known opportunity comes in…