Think You Missed The Rally? There’s Still Value Out There…

Whether we like it or not, it seems like we’re watching history being made on an almost daily basis. It’s hard to recognize that amid everything that’s been going on, but it’s true.

It’s also been easy to miss out on the market’s considerable rebound off the March lows. As I write this, the S&P 500 is now up roughly 40% since March 23, and only about 8% off its all-time highs set back in February.

I hope you didn’t miss out. If you remember back on March 20, I said that when the dust settles from the selloff, we’ll have the chance to buy wonderful companies at once-in-a-generation prices. That proved to be true.

I also offered these words:

I understand that times are scary right now, but we’ll make it through. We can’t let emotions run rampant as that’s when we make irrational decisions. This pandemic hasn’t drastically altered the business of our holdings over the long haul. But in the near term, we will see some headwinds.

But once this pandemic is behind us, folks will go on buying homes, swiping their credit cards, buying insurance, searching Google, watching YouTube, browsing Facebook, and buying lattes at the nearest Starbucks. Invest accordingly.

This has been the guiding philosophy of my Top Stock Advisor premium newsletter since the very beginning. And it has served us well during these turbulent times — most of our holdings have rebounded nicely, too. In fact, thanks to our focus on “things people will keep doing,” a couple of our holdings are already at new record highs.

I won’t reveal specifically what those names are out of fairness to my paid subscribers. But I’ll give you a hint… you can probably guess at least one of them from the quote above.

And while it hasn’t reached new highs, shares of American Express (NYSE: AXP) are up more than 43% since my March 18 issue. That’s when I told readers that the stock was once again trading at a massive discount and was a screaming “Buy.” (And if you’re not a premium subscriber, I still mentioned it a few days later in this piece.)

I don’t bring this up to brag. I mention it because I firmly believed that the selloff was creating some massive opportunities for investors to buy many wonderful companies at great prices.

And while all three of these stocks have rebounded sharply, I still think there are plenty of other opportunities out there. And I still believe in my “things people will keep doing” thesis. In fact, I’ll tell you about one opportunity in that vein right now…

The Rollercoaster Ride Of Oil Prices

The crazy ride in oil reminds me of driving through my hometown… if you blink you might miss it. The price of oil tumbled from over $50 for one barrel of that sweet West Texas Intermediate to around $11 a barrel.

More astonishing is that the futures contract of oil actually went negative for a short amount of time, which means that theoretically folks would pay you to take oil off their hands. Of course, oil has now quietly climbed back up to around $36 per barrel. 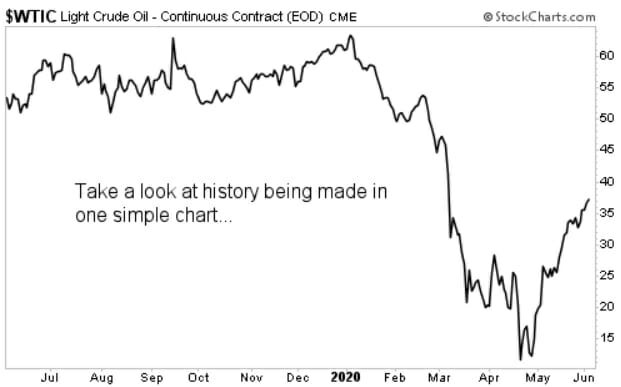 It was (and still is) a crazy time in the energy sector. But long-term investors should be looking at two of the top master limited partnerships (MLPs) on the market in Enterprise Product Partners (NYSE: EPD) and Magellan Midstream Partners (NYSE: MMP).

Many folks were (rightfully) worried about their energy holdings and whether they would slash their dividend payments or worse, go belly-up. And while many energy companies did just that, EPD and MMP are both stable companies with a long history of dishing out cash to shareholders.

In fact, on March 18 (oil had already slid to $20 per barrel at this point) EPD announced that they would not only pay a first-quarter distribution, but they would increase it by nearly 2% over the same period a year ago.

Magellan is in a similar position. They’re financially strong and intend to keep up its quarterly cash distributions to shareholders.

Unitholders should have received their quarterly distribution of $1.03 from Magellan on May 15. The oil and gas pipeline company has increased its distribution a staggering 683% since the company went public in 2001.

If you feel like you missed out on this rally, don’t be too hard on yourself. The only thing to do now is consider what’s next.

I still believe thinking about “things people will keep doing” works in this market. That should be your starting point for researching ideas. But MLPs like EPD and MMP are part of the solution (infrastructure) not the problem (supply). While both of these companies should be able to successfully navigate today’s difficult environment, both sport lofty yields right now. EPD yields 9% and MMP yields 9.2% as I write this.

Consider adding either to your long-term portfolio. I’m not saying it’s going to be smooth sailing for the energy sector from here on out. But if you’re willing to step in at these prices, I’m willing to bet you’ll be glad you did in the long-run.

P.S. If you love getting dividends, but hate waiting months and months to get them, you’re going to like this…

My friend Amber Hestla just revealed the details on a radical new accelerated dividend program that lets you pick when to get paid. No more waiting for regular dividends — you can get paid right away.

Amber’s readers are already earning tens of thousands of dollars with this simple (and safe) trading tactic. And now you can, too. Simply go to this page to learn all about it right now.