A Top Pick For The Cybersecurity Boom

You won’t hear about it until there’s a problem. But it’s a vital and growing industry.

Cyber theft is the fastest-growing crime in the United States. According to a report by Cybersecurity Ventures, global cybercrime costs could hit $6 trillion annually by 2021, up from $3 trillion in 2015. For example, the overall global economic costs incurred from the 2017 WannaCry attack were between $4 billion and $8 billion.

It’s hardly news anymore when we hear of this company or that company whose systems have been hacked, resulting in stolen personal information. Just look at a few of the names on this list of victims:

I could go on, but you get the idea. Today’s cybersecurity threat landscape is more dangerous than ever. With the rise of cloud computing, workforce mobility, and growth in connected devices the vulnerabilities are nearly endless for an attacker to steal our personal information, business documents and secrets, classified emails, patents, you name it.

This is where one of my recent picks over at Maximum Profit comes into play.

CrowdStrike Holdings (Nasdaq: CRWD) is transforming the cloud security market with its Falcon platform. It’s is the first cloud-native, intelligent security solution that protects vital information whether it’s at a physical office, in the cloud, or in a virtual environment (think of all your Zoom meetings). Its platform utilizes artificial intelligence (AI) algorithms to root out threats and stop breaches.

CrowdStrike’s Falcon platform is deployed over the cloud on a software-as-a-service “SaaS” subscription basis. CrowdStrike is a relatively new business — founded in 2011 and went public company exactly one year ago. But its cutting-edge cybersecurity solutions are quickly being adopted by thousands of customers.

The beauty of this “build it once, sell it many times” business model is that it allows the company to quickly ramp up cash profits. Although this hyper-growth firm has only been a publicly-traded company for one year, it’s already cash-flow positive.

Other financial highlights from the quarter include $178 million in revenue, an 85% increase over the same period a year ago. Subscription gross margins were 77%, and annual recurring revenue grew 88% year-over-year to $686 million. It also added 830 new subscription customers in the quarter for a total of 6,261 — representing a 105% growth year-over-year.

The need for device, cloud, and user end-point security isn’t going to wane anytime soon. It will continue to grow as more and more devices become connected. Cisco Systems (Nasdaq: CSCO) estimates that the number of connected devices will be around 28.5 billion by 2022, up from 18 billion in 2017. 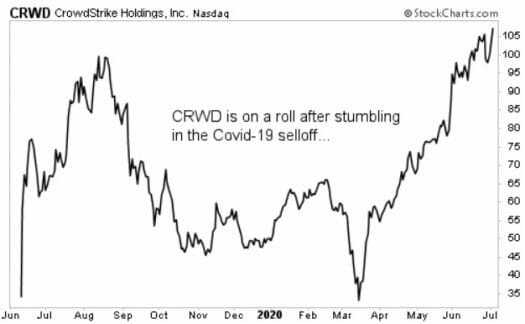 Companies like CrowdStrike will see increasing demand in the months and years to come. We’re up about 15% since adding it to our portfolio last month, but I think there’s more upside ahead if you want to look into this name further.

As I wrote a few days ago, we want to be invested where money is treated best. And right now, that’s in places is like cybersecurity, the cloud, AI, and more. Businesses like these should continue to flourish, regardless of what’s happening in the rest of the market (or the world around it). And my readers and I will look to join the ride where and whenever possible.

Editor’s Note: Speaking of tech opportunities, this could easily be our most profitable in years…

I recently spotted something buried deep in the SEC filings of a little-known satellite technology company. And the implications are huge…

It turns out this company paid a measly $26 million for a tech startup it bought in 2019. That’s an amazing price, but it’s just a small fraction of what they received for their $26 million.

Chances to beat Wall Street insiders don’t come along every day. So, it’s critical that you learn about this opportunity before it’s too late.