Forget Gold Miners. This Is Even Better…

Back in March, I wrote a two-part series of articles making the case for gold and gold miners. In those pieces, I also talked about how investors can profit — specifically, I mentioned the SPDR Gold Trust (NYSE: GLD) ETF and the names of a few quality mining stocks.

(If you missed either of those pieces, you can read Part 1 here and Part 2 here.)

But here’s the trouble with miners… Miners almost always need some type of borrowing or financing to develop a new project. This can be fine when times are good, but potentially crippling if prices crumble.

That’s not to say you can’t make a killing with gold miners — you absolutely can.

And as for GLD, well, there’s nothing wrong with it. But you’ll only make as much as gold prices rise.

If only there were a third way to profit from gold…

As it turns out, there is one company that’s been a favorite of mine for years that is all too happy to provide that financing to miners I mentioned earlier. But this is no banker, and the money isn’t a loan. Instead of collecting interest and principal, this company strikes a different bargain. One that guarantees a percentage of whatever gold or silver the mine produces at a low fixed cost.

All of the background legwork that goes into developing a mine? That’s someone else’s responsibility. This company doesn’t have to lift a finger. Nor does it trek to far-flung regions looking for rich deposits of precious metals. It works exclusively with experienced miners who have already found them.

It’s a win-win transaction. The mine owner gets immediate funding to start pulling metal from the ground sooner, while the investor skips about 872 steps and gets steady deliveries of gold and silver without the costs (or headaches) of mine ownership.

My favorite among this group is Wheaton Precious Metals (NYSE: WPM).

Let me give you a real example of a streaming transaction.

Back in 2016, Wheaton signed a transformative deal with mining giant Vale (NYSE: VALE) involving the Salobo mine in Brazil. Salobo is one of the largest copper deposits ever discovered in South America. With most of the site’s revenue coming from base metals, Vale decided to defray production costs by selling its gold (a by-product).

So Wheaton handed over an upfront check for $800 million. In return, it’s entitled to 75% of the gold that Salobo relinquishes over its 30+ year projected life at a low fixed cost of just $404 per ounce. The company netted about 49,000 ounces of gold last quarter from this agreement.

At the recent price of $1,817 an ounce, that’s equivalent to $89 million in quarterly revenue – from just one streaming deal.

Over the years, Wheaton has forged similar agreements at 20 productive operating mines, as well as several development stage projects that will drive future growth. Because the company doesn’t actually do any mining, it’s dependent on the skill of its partners. But Wheaton has teamed up with some of the best in the business, including Barrick, Newmont, and Vale.

The diverse portfolio is anchored by several prolific sites, including the Penasquito mine in Mexico, which yielded 1,810 million ounces of silver last quarter at a fixed price below $5 per ounce. There are still unexplored zones that could potentially lift that total higher in the future. Wheaton won’t have to contribute a penny towards exploration or expansion – but will benefit just the same.

In total, Wheaton raked in 406,000 ounces of gold last year, a new record high. Not bad for a company without a mine of its own. Thanks to streaming arrangements at three of the world’s five largest deposits, it also collected 22 million ounces of silver. If that wasn’t enough, it took in 22,000 ounces of palladium.

Palladium is undoubtedly one of my favorite commodities. Dwindling global supplies coupled with rising demand from automakers has led to acute shortages. A widening deficit has sent prices soaring over the past year to $2,000 per ounce. And Wheaton has only paid about $402 per ounce.

That leaves a wide profit margin of about $1,6000 per ounce.

Firing On All Cylinders

Inflationary cost pressures in the mining industry are well documented. According to Bloomberg, all-in sustaining costs for gold have risen to $934 per ounce industry-wide. That’s what it costs, on average, to get the metal out of the ground.

By comparison, Wheaton’s gold cost is essentially capped at $424 per ounce. It has risen just 1% over the past 12 months, while gold sales prices have surged. Expanding margins mean any gain on the top-line is magnified on the bottom. Earnings per share in the most recent quarter have soared more than 60% from this time last year.

Wheaton’s operating cash flows have outpaced gold and silver, jumping 50% last quarter to $177 million. This metric is of particular importance to us since it directly affects the dividend. Wheaton’s policy is to distribute 30% of its annual operating cash flow.

That’s as transparent as it gets: the more the company takes in, the more it pays out. 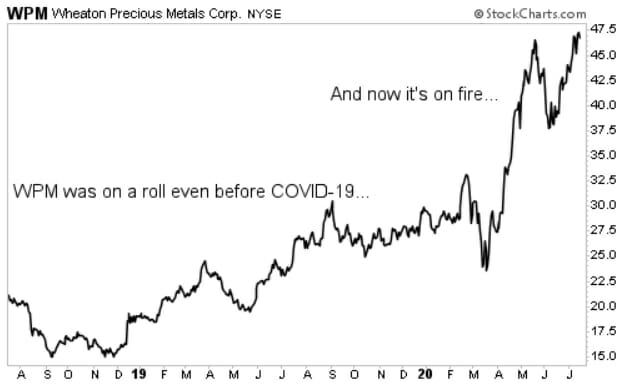 After investing aggressively for years, Wheaton can sit back and count up its attributable production as its partners do the heavy lifting and pull more gold, silver, and palladium from the ground.

In terms of gold equivalent ounces (GEOs), total production of 707,000 ounces in 2019 overshot internal targets for the eighth straight year. And looking ahead, management is forecasting production to increase to 750,000 GEOs on average over the next five years.

That will buoy cash flows, even if prices level off or slowly recede. But if geopolitical and economic turbulence drives precious metals even higher, then Wheaton will take full advantage. Shareholders benefit from leverage to underlying commodities prices, without the risks that come from rising mining costs.

As you can see from the chart above, WPM has been on quite the run since the Covid-19 selloff. (Coincidentally, I told some of my readers to get in on this on March 9.) But if you’re looking for exposure to precious metals right now, WPM should be on your list.

P.S. Gold could soon soar past its all-time high. That’s great news if you currently own any physical gold… and even better news if you own gold stocks.

And my colleague Dr. Stephen Leeb has recently discovered a company that is sitting on what could be the largest gold deposit ever discovered. Barely anyone is talking about this deposit right now… But if he’s right, it could allow early investors to make 20-times their money… maybe more.