Another Stock Left In The Dust. Time For A Rebound?

Back in August, I wrote about a strange disconnect that was taking place in the market.

Specifically, I highlighted the fact that while the major averages recovered their previous highs after the selloff in March, that was only half the story. As it turned out, many stocks were still off their highs – the rally was just being led by a few very large names.

Here’s what I said back then…

I can tell you that most of my holdings across a wide variety of industries are still well below their pre-Covid levels. In fact, a quick stock screen reveals that while the S&P itself is near a record high, more than 1,800 large-cap stocks are languishing 20% or more below where they were trading six months ago.

Remove the mega-cap FAANG group (Facebook, Amazon, Apple, Netflix, and Google) from the picture, and it’s clear that most stocks are still struggling to recoup losses and make any real headway.

Fast-forward today, and that is still pretty much the case. In fact, my colleague Jimmy Butts said it best recently, when he said pretty much anything in the tech world or with “pharma” or “therapeutics” has done well.

Today, I want to point out another deeply sold off name that I like. Once you understand the business, you’ll clearly see why it’s down. But it’s still a good business. It may take some patience, but it could pay off handsomely in the end.

The REIT I’m Targeting For A Rebound

Entertainment Properties Trust (NYSE: EPR) is a real estate investment trust (or REIT) that I’ve followed for a long time.

Prior to Covid-19, there was a lot to like about it. It has a specialized portfolio of movie theaters, water parks, snow ski resorts, Top Golf complexes, aquariums, fitness centers, concert venues, family entertainment districts, and other such facilities. EPR owns 369 of these assets leased to 200 different tenants across the U.S. and Canada.

Again, before all of this, I made the case that “experiences” were the future for brick-and-mortar real estate plays. Traditional retail (think malls and the like) were out, with a few exceptions. The evidence was clear. Nearly three-fourths (74%) of consumers surveyed valued experiences over products/things — and they were shifting their spending patterns accordingly.

Unfortunately, these gathering spots were hard hit during the Covid lockdowns. With many businesses closed, this landlord only collected about 35% of its contractual rent last month. Of course, it has its own bills to pay and covenant terms to maintain with lenders.

But I’m not ready to fully count EPR out, however, because it’s sowing the seeds of a comeback.

Ripe For A Comeback?

Management successfully negotiated with bank lenders to temporarily loosen some of those terms and restrictions. But there’s a catch. The company must limit capital expenditures and isn’t allowed to make dividend payments during this relief period, which is scheduled to end next April.

That means investors won’t receive any distributions for the next couple quarters, or until EPR voluntarily terminates the agreement – whichever comes first.

In other words, lenders have told the company to freeze its spending for a while until business normalizes. Personally, I think that would have been a prudent move anyway.

And there is already a strong recovery underway. The vast majority of EPR’s cinemas and 92% of its other properties are back open for business. The company only lost 1% of its normal rental revenue to vacancy. And tenants representing 90% of rent have either caught up on their payments or signed deferral agreements – whereby they will pay back over time.

It’s better to work with tenants than lose them. In that spirit, EPR has restructured its master lease with AMC, reducing fixed rents, while extending lease terms by nine years. While not ideal, these rent reductions are manageable – amounting to only about 6% of pre-Covid revenue. 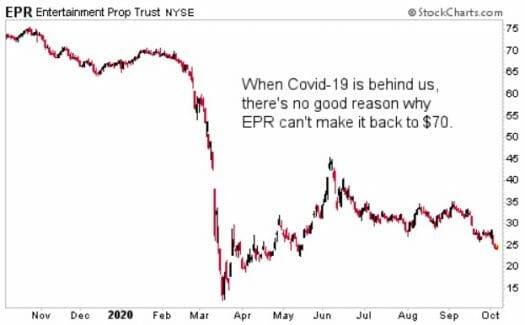 EPR has $1 billion of unrestricted cash on hand and burned through about $38 million last quarter (including interest payments and preferred share dividends).

Including maintenance CapEx, the company has sufficient liquidity to last for another 24 quarters – or six years – at this rate. And that’s if we see zero recovery in rent collections. Highly unlikely.

With minimal asset impairments, I think EPR still has a fair value near $70 per share and will ultimately return to that level. That’s about 180% upside from these levels.

I’m not saying it will happen overnight. And the ride may not be smooth. But if we even get close to that, it will mark a stunning turnaround. And that’s why I am willing to forego distributions over the next couple quarters as the company regains its footing.

Editor’s Note: As Nathan just outlined, this market is being held up by a few big names. And while there are pockets of opportunity for bullish traders like he just described, there are a lot of other stocks out there that are completely worthless.

That’s why our friend Jim Pearce is brushing off one of his favorite strategies for trading overvalued “zombie” stocks. It made him a killing in 2000 and 2008, and it could easily hand investors major gains now.

ant to learn the details of Jim’s next explosive trades? Click here to sign up for his online tutorial.