Why The Big Picture For Housing Is So Bullish…

I couldn’t believe it…

The voice over the phone told me I could refinance into a 15-year loan for just 1.85%.

That’s where we are at today in this low-interest rate environment.

You may have heard your friends bring this up in casual conversation, right behind the weather and sports. But when you actually hear the number quoted to you, officially, it’s still a little surprising.

Bank and lending institutions are having a heyday with lending for new-home purchases and refinancing people’s homes. Low interest rates — along with the Millennial generation finally purchasing homes — are fueling a strong housing market.

You may already know about my bullishness on the housing market. I talked extensively about it back in March. In fact, in that month’s issue of Top Stock Advisor, I recommended homebuilder Lennar (NYSE: LEN), which has performed nicely for us despite adding it to the portfolio at precisely the wrong time. Two weeks after my issue went out the S&P 500 crashed 25%, and shares of Lennar crashed roughly 50%.

Despite that massive stumble, we are up about 35% on our position. I expect shares to outperform the broader market in the long run, and I may give more details on why I like LEN in a separate piece. But what you need to know for now is that the bigger picture remains intact… 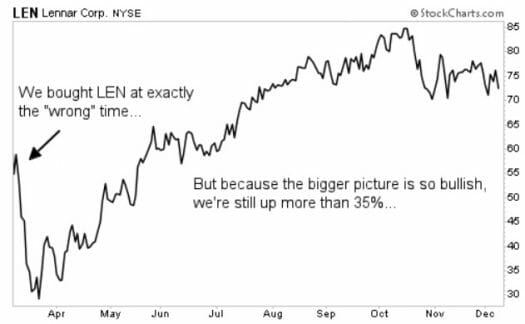 Ripe For A Comeback

You see, low interest rates have allowed folks to afford larger homes. It’s also pushed others to pull some equity (cash) out of their home and lock in a lower rate.

This cycle of loaning money is critical for the health of the economy. Just think back to the financial crisis… the goal of all those rescue efforts was to give money to banks with the hopes they would lend it out to consumers. The problem was that the banks were under strict lending regulations and consumers had no jobs and terrible credit.

The incredible thing is that although folks are actually snagging up homes or refinancing today, it hasn’t been reflected in financial stocks.

All three major indexes are hitting new highs. Thousands of stocks have fully recovered from their coronavirus-induced selloff.

Yet, the financial sector hasn’t…

Financials are the second-worst performing sector in the S&P 500 behind energy (but energy’s woes started long before the health pandemic).

It seems there’s a massive disconnect between investors and financials. Much of the focus has been on the technology sector, and for good reason. There’s a lot of exciting things happening there, and companies are experiencing massive sales growth.

But while everyone is focused on that sector, many financials are trading at massive discounts. Many banks are trading at their lowest price-to-book value in the last 20 years, and that includes during the depths of the 2008 financial crisis.

The takeaway is very simple here, so I want to be clear…

I think an investor could invest in a basket of banks and do very well for themselves over the next few years.

You could also follow my recommendation for Top Stock Advisor readers and get into LEN. As I said, I think the stock will continue to do well over the long run.

But I actually didn’t recommend a bank in my most recent issue. That’s because I want more exposure to the housing market, and specifically the mortgage market.

My most recent pick isn’t a new company by any means, but it is new to public markets. And now that the market has had a few months to digest the IPO, I think now is the time to get in…