Why I Hate Energy Stocks (But I’m Still Investing)…

I’m not going to sugarcoat this… when I sat down to run my usual scans for the Maximum Profit system, an energy company flashed on the screen as a “Buy”.

I not only didn’t want to believe it, but I also wanted to immediately dismiss it.

You see, I’m not a fan of energy stocks. I’ve been burned many times by energy — and commodity — stocks over the years. In fact, whenever I hear someone tell me they like stalwart energy companies like Chevron (NYSE: CVX) or Exxon Mobil (NYSE: XOM) because they are “cheap” I can’t help but shake my head and roll my eyes.

Over the last five years, CVX and XOM have delivered investors returns of 29% and -35%, respectively. Go back 10 years, and it doesn’t get any better. They’ve returned 73% and -11%, respectively over the last decade. Compare that to the 208% performance of the S&P 500.

It’s not just those two stocks either… The Energy Select SPDR Fund (NYSE: XLE) has returned -28% and -11% over the last five and 10 years, respectively. 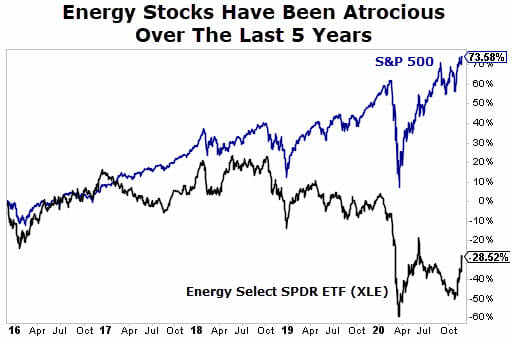 Of course, over at Maximum Profit, we’re not long-term investors. Still, it’s easy to see why I’m not a fan of energy stocks.

But here’s the thing… Despite their atrocious performance — and my scorn for them — I have also seen the other side of energy stocks… The side that actually rewards traders.

In fact, six years ago, my portfolio over at Maximum Profit was chuck full of energy players. The fracking boom was underway, and oil was over $150 per barrel. (Today, that sweet Texas crude goes for under $45 a barrel.)

We made good money with a number of oil-related stocks. Of course, when the price of oil tumbled, the Maximum Profit system rotated us out of oil stocks and into the next big trend.

Don’t Fall In Love With This Sector

Since those halcyon oil days, we haven’t been terribly successful with many energy trades. And when I use the term “energy” I’m referring to mainly the oil and gas markets. After all, we’ve done well with renewable energy trades like solar firm Enphase (Nasdaq: ENPH) where we booked a 183% gain.

But this is one of the benefits of having an objective system at your disposal. It delivers buy and sell signals despite your own built-in set of beliefs. When a trade isn’t working, we simply book a modest loss thank and move on to the next winning trade instead of tying up our capital into a long-term loser.

Now, there is some evidence to the idea that there’s momentum in the energy sector. As I noted recently, one of my favorite indicators (the AD line) is telling us that the market rally is healthy, with broad participation from stocks in a number of sectors.

As I also noted in that piece, the Maximum Profit system is telling us just that. For the first time in a while, it’s flagging several stocks from surprising sectors. Energy is just one – and banking is another. These have been the two worst-performing sectors so far this year. And this serves as another reason to think these two sectors are showing signs of life.

As I said back then:

This tells me that there are signs of life in two of 2020’s worst-performing sectors. Investors are beginning to look outside the tech industry for new profitable positions. This makes sense, as some of these sectors have a lot of catching up to do. If that’s the case, then we will position ourselves accordingly over at Maximum Profit. If you follow suit, then you stand a good chance of riding the next wave to more profits.

With that being said, my subscribers and I are stepping into the momentum in the energy sector. But we’re doing it with caution.

So if you’re thinking about putting some cash to work in the energy sector, by all means, go for it.

Despite my disdain for energy stocks, I know that you can make sizeable profits from them. I’ve also learned that these are stocks that you can’t marry. If the trade turns south, cut it quickly. Don’t try and hold on and “hope” it turns around.

P.S. It’s possibly one of the largest treasure troves of precious metals ever discovered…

Buried deep in the Arctic Circle, geologists and precious metals experts estimate it’s worth $100 billion or more. And with melting ice caps, it’s finally ready to give up its hidden treasure.

Early investors in this mineral bonanza stand to make a fortune. And we’ve found a small-cap mining stock that’s poised to make explosive gains. To get in on the action, click here for details.