Is A Major Rotation Taking Hold Of The Market?

If the past few days of market action has you feeling a little confused, you’re not alone.

I believe what we’re witnessing over the past couple of weeks can be summed up in one word: rotation.

That’s the best way to understand what’s happening in the financial markets right now. I’ve discussed this in recent weeks, and there are a few factors involved. But it’s playing out as I expected. Here’s what’s going on…

If you remember, in this piece, I touched on what was happening in the bond markets.

The yield curve has been relatively flat in recent years, but that’s not what’s happening today. Yields on the 10-year note have been climbing faster than those on the 2-year. Without getting into the boring details, here’s what that basically means…

Those record lows were caused by a flight to quality during the pandemic when fears of a global recession drove money out of equities and into the safety of government debt. We’re seeing the reverse right now as the global economic forecast continues to brighten and investors withdraw money out of fixed income classes.

It’s been less than two months since 10-Year yields finally edged back above the psychological 1.0% level. Recently, they spiked as high as 1.61%. That’s an uptick of more than 60 basis points (a monstrous move in the normally staid treasury market).

So as the economy kicks back into gear, the “yield curve” has finally begun to steepen. This a term that’s used to compare the yield between the two-year and 10-year treasury note.

The cause for the gap all goes back to the Federal Reserve, which is doing everything it can to keep money cheap. That includes keeping the fed funds rate at zero, but also pouring $120 billion per month into short-term instruments. As I pointed out in my previous piece, analysts aren’t anticipating a rate hike until 2024.

But the one thing the Fed can’t exercise direct influence over is longer-term bond yields. These are driven by market forces, and they have been climbing. That’s a good sign of the prospect of growth in the economy, as I mentioned, but it’s also rattled investors.

A Change In Market Leadership

All of a sudden we’re seeing the most explosive sectors of the market — namely technology – begin to sell off. That makes sense, because firms will have to pay higher borrowing costs to fuel growth.

The iShares U.S. Technology ETF (NYSE: IYW), which tracks the performance of highfliers like Apple (Nasdaq: AAPL) and Twitter (Nasdaq: TWTR), has retreated nearly 10% from its mid-February peak. And as I write this, the tech-heavy Nasdaq has lost ground in 9 of the past 13 trading sessions. 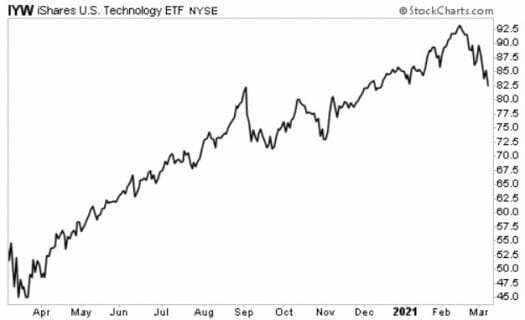 Cheap debt has helped fuel the market’s advance. And many businesses will soon have to start paying a bit more at the pump. Meanwhile, the global rollout of Covid vaccinations has brought millions of consumers out of hibernation, deflecting some of the demand for telemedicine, video streaming, and other stay-at-home stocks that led the market in 2020.

Since the Nasdaq peaked on February 12, Apple has shed about $270 billion in market cap. Tesla (Nasdaq: TSLA) has seen $207 billion wiped out. By comparison, Facebook’s (Nasdaq: FB) $35 billion decline in market value seems like a mere papercut.

Overall, the Nasdaq 100 Index (a proxy for the tech sector) has collectively lost $1.6 trillion (with a “t”) in just three weeks.

But all that money has to go somewhere.

As I’ve mentioned before, financials and commodities (among other groups) are shining right now. I know that may feel a bit odd to most investors, but these sectors will continue to gain attention if inflation heats up.

In fact, as I’ve been saying for the past couple weeks, I believe we could be at the beginning stages of another commodity “super-cycle”.

Needless to say, I’ll be watching this fascinating rotation closely in the weeks ahead. For now, it’s great to see unloved value stocks finally getting their due.

In the meantime, if you’re looking for some extra diversification (plus big-time upside), then you should check this out…

My colleague has found an obscure, small-cap mining stock that’s poised to blast off. The time to invest in this gold mining play is now, before the rest of the investment herd catches on and bids up its share price. Click here for details.