Nathan Slaughter Weighs In On The Commodity Supercycle, and More…

Several weeks ago, we began making the case for a global commodity “super-cycle”.

The evidence is building day by day. Among the many factors behind this are some of the usual suspects: global money-printing, increasing government spending, higher demand for raw materials, China, etc.

But there are some new players to the game, too – and we’ve covered a few of them. The elephant in the room, of course, is the economic recovery from Covid-19. But my colleague Nathan Slaughter has also made the case for a “green wave” of spending on everything from infrastructure to electric cars and more.

Since first making the case for this boom, we’ve danced around a few other related topics. For example, I touched on the critical need for infrastructure spending as well as the topic of “ESG” investing here. Meanwhile, Nathan made the case for copper in this piece.

With the unveiling of President Biden’s infrastructure proposal this week, I thought it would be a good time to check back in with Nathan. We talked about things getting “back to normal”, the infrastructure bill proposed this week, and other commodities (besides copper) that are poised to boom — and how we can position ourselves to profit…

Nathan, I know you’re a big baseball fan, and the season just kicked off yesterday with Opening Day. How did it feel to see fans back in the stands?

Well, as I told my readers, better late than never. I know you’re a Texas guy, and if you get a chance to check out that new $1.2 billion ballpark the Texas Rangers are playing in this season, I highly recommend it.

As you know, it was supposed to open up fans in March 2020. That never happened – Covid threw the mother of all curveballs. The first half of the 2020 season was canceled, and when play finally resumed, a shortened schedule of games was played in empty stadiums.

Regardless of where you fall on the open/don’t open debate, you’ve gotta admit it’s good to hear the roar of the crowd in a stadium. I loaded up the family and took the 3-hour trip to watch a college game between Arkansas (my alma mater) and Texas. I was starved for live action.

And while the stadium is impressive, I couldn’t help but notice the sellout crowd of about 17,000 — no cardboard cutouts. Real, live humans. Restrictions in Texas are lifted now, so we’ll see even more people in the stands. Plus, we’re vaccinating more and more people every day.

Again, I’m not interested in the politics of the debate. I’m interested in signs like this — that things are finally getting back to normal – and what that means for us as investors.

I agree that it’s usually best to steer clear, but sometimes the politics are unavoidable – and they can have a direct impact on the market. What’s your take on the stimulus and the infrastructure bill, which was announced this week?

For starters, the market’s focus has finally turned away from monetary policy to fiscal policy. And I called it months ago to my readers – I said that government spending is about to ramp up in a big way.

The stimulus just confirms what I’ve been saying all along – that we’re going to see a massive wave of consumer spending on things like travel, entertainment, and more.

As far as the infrastructure bill goes, I’ll save my analysis of the finer points for another day. But it’s been clear for a while that our critical infrastructure needs attention. And it just goes to further confirm my thesis that we’re on the cusp of a boom in commodities – everything from copper to lithium, and more.

At the same time, the green energy movement now has a staunch ally in the White House. And that’s what I think is really going to fuel this commodity rally. A “green wave” of renewable power and electric vehicle development is starting to build.

You’ve talked about the case for copper in detail recently. But you mentioned other commodities…

Yeah, this story is not confined to copper. Take zinc, for example. It’s widely used as a coating to help prevent rust and corrosion. Prices marched from $1,675 to $2,800 per ton recently as supply constraints and rising demand set the stage for a 650,000-ton deficit this year.

Other base metals such as cobalt (a critical raw material in batteries) are riding the same macro tailwinds. And you can’t build anything without steel, which is why leading iron ore producer Vale shipped 64 million tons to China last quarter – smashing the previous record.

These are the things that lead to charts like this… 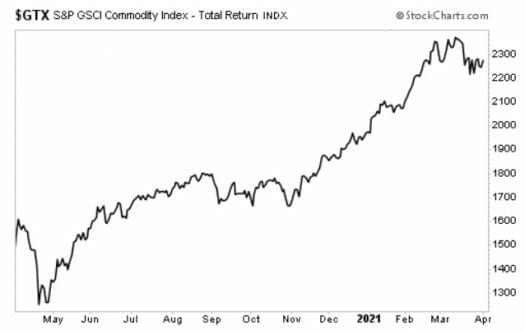 This is a one-year chart of the Goldman Sachs Commodity Index. But if you think you missed the run, think again — because despite the rapid climb, this index still isn’t ahead of pre-Covid highs. That’ll happen soon enough. A weakening dollar and mounting inflationary pressures are only bolstering the bullish case for these and other hard assets. And that’s why I’ve been saying we’re entering an age of a prolonged commodity “super-cycle”. The previous one lasted almost a decade from 2000 to 2011.

What does that mean for us? And how can we position ourselves to profit?

Well, the big players are already known – and they’re not a bad option for investors. For those with a little more aggressive bent, there’s a lot of potential upside in identifying a smaller mining outfit that has a good chance of being acquired. That’s the route we took over at my Takeover Trader premium service.

But if you’re looking for broad exposure to the commodity boom that’s taking place, and you’re an income-minded investor, then then I’d suggest going the fund route. That’s what we did over at my High-Yield Investing service… We added a closed-end fund to our portfolio that’s paying a hefty 5.5% yield right now – and that’s already with significant price appreciation in the past few months.

The beautiful thing about this fund – and income investors will appreciate this – is that the fund pays out each month. You see, a lot of these agricultural and mining outfits are based internationally – and it’s a common practice to pay irregular (or semi-annual) dividends. So this fund smooths out the payments while still offering broad-based upside to the commodities boom.

I want to thank Nathan for joining us today. And while we’re at it, if you’d like to learn more about High-Yield Investing – as well as get the name of his latest picks – then we’ve got you covered.

Go here to check out his latest report now.