The Rise Of NFTs — And Should You Invest?

If you’re new to the world of cryptocurrencies, then you’ve probably found yourself trying to wrap your head around a lot of new terms.

Last week, I offered some thoughts on the difference between investing and speculating. I had originally shared some of these thoughts with my premium Top Stock Advisor readers — as a fair warning before diving into the world of cryptocurrency.

If you missed that piece, I encourage you to go back and check it out. The same goes for my colleague Brad Briggs, who weighed in on the Coinbase (Nasdaq: COIN) IPO and cryptocurrencies in this piece.

But today, I want to discuss one of those terms: NFTs.

Now, to be clear, I’m not doing this as a recommendation. I’m doing it so that we can better understand what’s going on here. Because whether this is a bubble or the way of the future (or a little of both), it pays to know about this stuff — and interpret what it says about investor behavior.

And as my premium readers know, I believe that understanding our behavior as investors is just as important to success as finding a winning investment idea.

People want to speculate on cryptocurrencies, because well… it’s exciting. The price of bitcoin has skyrocketed from about $6,900 to more than $63,000 in the last year. 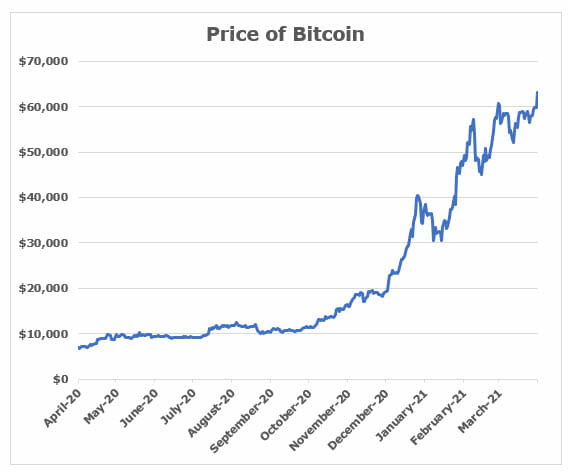 When things are soaring like this, everyone wants in. But again, you have to understand that this isn’t an investment. It’s a speculation. So don’t put your rent money into it.

Right now, the latest craze is the rise in the non-fungible token, or “NFT.” So what is it?

An NFT is a unique digital “asset” for which ownership records are held in an online ledger. An NFT can be art, music, a video clip, virtual pet… it can be anything someone makes up. The value of these NFTs is simply what someone is will to pay for it.

If this seems crazy that someone would fork over cash for a virtual pet or video clip, wait until you see the numbers behind this crazy market. In late February, digital artist Beeple — aka Mike Winklemann — set a record when one of his digital pieces sold for an eye-popping $6.6 million. Even more incredulous is that shortly after that one of Beeple’s NFTs went for $69 million. Even Twitter (Nasdaq: TWTR) and Square (Nasdaq: SQ) CEO Jack Dorsey hopped on the trend and sold his first tweet as an NFT for nearly $3 million.

Now, if you’re in the boat where you couldn’t fathom spending millions for a baseball, fine art, or antique, then these NFTs likely seem absurd. But if you do see the value in any of those markets, then it’s easy to see why folks see value in NFTs.

While NFTs are all the rage, at some point the bubble will burst and the mania will die down. This doesn’t mean they (NFTs) will go away, though. It just means that you may not find a higher bidder for your digital piece of art.

In my opinion, these aren’t investments these folks are making. This is pure speculation. After all, the artwork doesn’t produce cash flow. Right now, the value is simply in what someone is willing to pay for it.

This is a perfect example of what could be called the “greater fool theory.” But that doesn’t mean we should ignore it altogether, because the rise in NFTs stems from the massive resurgence of bitcoin and blockchain. Cryptocurrency, like bitcoin, is the most well-known digital asset. But what distinguishes NFTs from cryptocurrencies is their non-fungible nature, meaning that they’re unique assets and not interchangeable.

Bitcoin is fungible… everyone who owns one bitcoin owns the same thing. An NFT by definition is one-of-a-kind.

But I digress… What’s truly groundbreaking behind bitcoin and NFTs is blockchain technology. And this is what I want you to be thinking about. Because there will come a day when we as investors can profit from the application of blockchain to real-world purposes. Blockchain will likely disrupt a number of industries, like the payments industry for example.

Now, before I go any further, I want to state one thing.

I have little doubt that blockchain technology will revolutionize our world. Just like the internet did.

For the record, we like ETH better than BTC right now, but I don’t want to get into the weeds. The whole point is that cryptocurrency is a massively popular speculative bet, right now.

I’ve been fielding a lot of questions from friends and family about it. Everybody wants to know whether they should put some money in it or not.

Bottom line is that if you do decide to dabble in this space, be very wary, and understand that you’re speculating and not investing.

As I’ve said before, there’s nothing inherently wrong with speculating. But you need to have your ducks in a row, and know yourself, to do it right…

And if you’re looking for more aggressive ideas, then I recommend you check out my latest report of investment predictions…

As I tell my readers when I release this list each year, I wouldn’t bet the farm on these picks. But our track record has been pretty solid over the years, allowing investors the chance to rake in gains of 622%, 823%, and even 993%. But nobody gets everything right. So if you’re looking to put some money to work in picks that have hyper-growth potential, then this is where you should start.