No Matter What Happens With The Fed And Inflation, This Still Works…

Thanks to an accommodative Federal Reserve, a cascade of money has flooded the market. And all of this liquidity has had investors feeling pretty good about themselves for more than a year now… 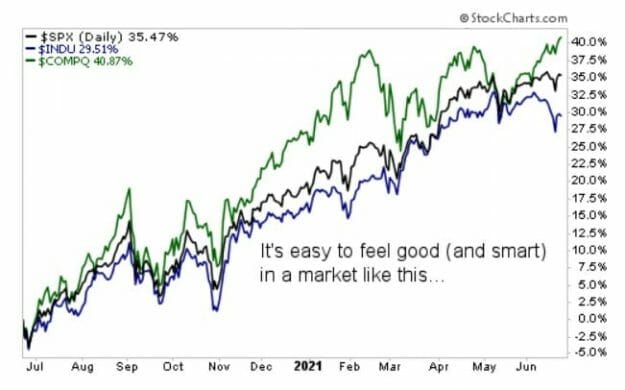 The S&P 500 is trading near all-time highs. But we’re also seeing the effects of all of this liquidity (in addition to fiscal stimulus) across the economy. In May, consumer prices rose 5% over the past 12 months — the most we’ve seen in 13 years. And producer prices spiked 6.6%, the largest increase since the U.S. Bureau of Labor Statistics started tracking the data in 2010. Both numbers come on tail of equally concerning numbers in April.

So it appears that inflation is here – but whether it is “transient” or not is the question. The other question investors are beginning to ponder is when the monetary punch bowl gets taken away.

For example, when Fed Chairman Jerome Powell spoke on June 16, he signaled that they expect to raise interest rates by late 2023. This is sooner than they anticipated in March.

Markets initially tanked on the news before recovering some of those losses before the close. And since then, it seems the market has gotten over being spooked (for now). Near the halfway mark, all three major indices are up big on the year. The S&P 500 is up nearly 13%, while the Dow Jones Industrial Average and Nasdaq are each up by about 10.7%.

Here’s How We Should Handle All This…

To put it simply, it may feel like the ground is beginning to shift. So how should we proceed with the way we invest?

Over at Top Stock Advisor, I’ve been telling my premium subscribers to expect some more volatility as investors digest the Fed’s updated tightening policy. And we’re keeping an eye on the Consumer Price Index (CPI) month-by-month to see if inflation is picking steam.

But there’s one piece of advice that’s worth repeating as we keep an eye on these critical factors. And it’s one I also brought up a few days ago, when I wrote extensively about what investors can do to combat against the damaging effects of inflation.

In fact, it’s good advice that applies to just about any investing situation: buy exceptional businesses at reasonable prices.

It may not be the most exciting advice, but it’s worked out for us pretty well over at Top Stock Advisor.

When you buy excellent companies for a fair price, you’re likely to do well in the long run. And more often than not, you’ll find that these companies do well, rain or shine.

For example, back in May, I covered Facebook’s (Nasdaq: FB) latest earnings in my newsletter. I also commented on how the social media behemoth continues to report outstanding financials, quarter after quarter, year after year.

As a quick refresher, the company grew quarterly sales a whopping 48% in its first quarter over the same quarter a year ago. It also churned out more than $7.9 billion in free cash flow during the three-month period.

Its user growth continues to surge. And that’s despite a lot of negativity surrounding the company, from calls for antitrust legislation to various “DeleteFacebook” campaigns that have circulated over the years.

But in its short 17-year period, Facebook has altered (for better or worse) not only the marketing landscape, but also how we interact with each other. Amazingly the company has attracted more than 50% of worldwide internet users to its platform, with the company ending 2020 with nearly 2.8 billion monthly active users.

You can see the company’s exponential user growth since it was started out of a Harvard dorm room:

Facebook’s sustained growth has been impressive, and as shareholders, we’ve been equally rewarded over at Top Stock Advisor. 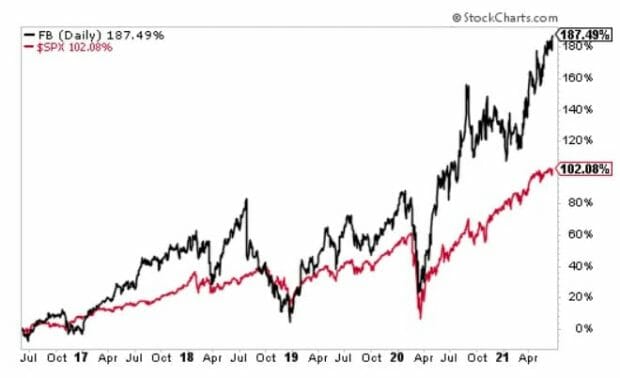 My advice: Don’t overthink it when it comes to building out the core of your portfolio. You want to own a piece of a company like Facebook – one that just seems to get it right year in and year out. Not only will you feel a lot less anxiety about your portfolio, but you’ll also feel more confident when you spot the chance to take a “big swing” at an opportunity with major upside…

Speaking of opportunities with major upside, I’ve found a massive one in the “next big thing” in tech…