If you’re ever driving along Highway 285 through Reeves County out in West Texas, and you’ll pass through a small, unassuming town called Pecos. It’s not much more than an outpost really, with a population of around 9,000. But there are several gas stations, a Fairfield hotel, even a Wal-Mart. It’s the closest thing to civilization in this remote region.

But of course, looks can be deceiving. You see, despite the lack of amenities, this small town is home to an incredible concentration of wealth.

That wasn’t always the case. Until recently, it was best known for cantaloupe farming, with a median family household income of around $26,000. But that all changed when overall-clad oilfield workers began pouring in by the thousands, turning this dusty frontier into the second fastest-growing city in the United States.

The reason for this abundant wealth: this whole area used to be a shallow inland sea teeming with marine life. About 800 million years later, it’s now home to some of the richest petroleum deposits on the planet.

A modern-day gold rush – or in this case, black gold – has attracted throngs of energy companies whose largesse has spread like wildfire through the town. Servers at busy roadside barbecue joints pocket buckets of tips from crowded tables. Enterprising mobile barbers can pull down as much as $180,000 per year. And let’s not forget about the local landowners who collect hefty royalty checks in their mailbox each month.

The Permian At A Glance

Welcome to the heart of the famed Permian Basin. This geological wonder, which occupies 75,000 square miles along the Texas/New Mexico border, is almost single-handedly responsible for vaulting the United States into position as the world’s top oil producer, threatening the dominance of the mighty OPEC cartel.

The Permian Basin has triggered a seismic upheaval in the global energy market – and Pecos lies at the epicenter.

Of course, we’ve known about this region for a while. But before you think you’ve already missed the boat – or that EVs and alternative energy sources make this sector obsolete – think again. As you’ll see in a moment, the story of the Permian is far from finished. In fact, I think this next “boom” could prove to be the “mother of all oil booms”…

But first, let’s back up and examine what makes this region so special. 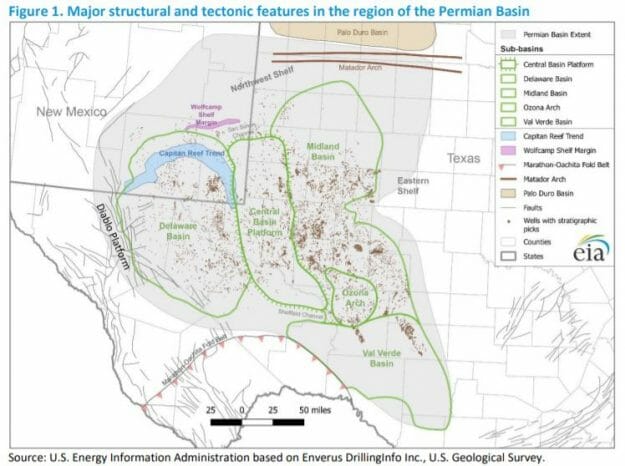 The Permian Basin straddles the border of Texas and New Mexico and occupies about 75,000 square miles. This geological wonder is comprised of about 7,000 smaller fields, some of which are stacked one on top of another at depths ranging from as shallow as 300 feet to as much as five miles below the surface.

There are two primary hunting grounds, the Delaware Basin and the Midland Basin, each of which contains tens of thousands of active wells. These branches are further sub-divided into many individual formations that have been assigned all kinds of colorful names… Bone Spring, Spraberry, Wolfcamp, etc.

This is not a new discovery. The first commercial well in the Permian was drilled back in the 1920s, and crude oil has been flowing dependably ever since. Output tapered for a while, until innovative fracking and horizontal drilling techniques tapped into unconventional deposits that were previously inaccessible, unleashing a torrent of production.

The Permian Is (Still) Swimming In Oil

There was a time when the so-called experts said that the era of shale was over. The industry was down for the count, and the Covid pandemic sent prices through the floor.

Across the U.S. (and especially in West Texas), thousands of jobs in the industry were lost, and it seemed like the booming prosperity in these little towns might disappear out of thin air. Combine this with the rise of EVs and other alternative energy sources like wind and solar, and it’s easy to see why some thought the best days were long gone for the oil & gas industry.

Yet, as I noted in this article, global oil demand is expected to steadily climb for the next few years. And while the Permian Basin has relinquished 30 billion barrels (give or take) so far, the U.S. Geological Society estimates that there are still 46 billion barrels of recoverable oil reserves and 281 trillion cubic feet of natural gas still waiting underground.

In fact, the Permian recently toppled Saudi Arabia’s legendary Ghawar field as the most productive oilfield on the planet.

We’re talking about truly staggering amounts of energy here. And I don’t think it’s understatement to say that getting this stuff out of the ground here rather than overseas (while still developing alternative sources) is of the utmost national strategic importance.

In the meantime, here’s an important number I want you to remember: 5.4 million.

That’s the average daily (24-hour) oil production in the Permian Basin. For context, that’s enough crude feedstock to produce 238 million gallons of gasoline, diesel, and other refined products. It’s also several hundred thousand barrels per day above the previous record high set in 2019 before the pandemic.

Keep in mind, the entire United States (including Alaska) currently produces about 11.8 million barrels per day. That means the Permian Basin accounts for more than 40% of the total. And in case you missed it, benchmark West Texas Intermediate (WTI) crude prices have rebounded in a major way… 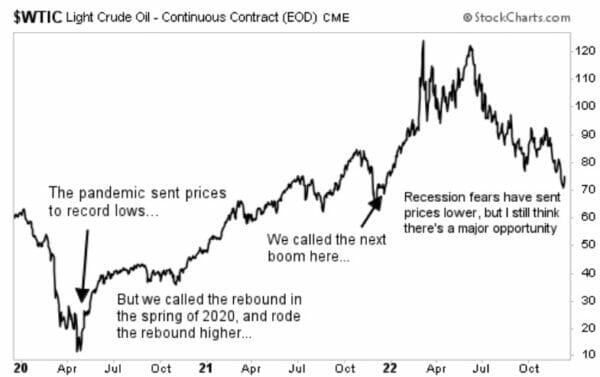 Multiply those figures, and you start to see why so many producers are anxious to stake a claim here… and why entire communities of temporary housing have been built near Pecos to accommodate the rising population of workers.

As I write, the number of active oil drilling rigs in the region has more than doubled to 340. For perspective, there are around 600 operating across the entire country – meaning half are clustered in this one spot. That’s no accident.

What’s more, producers have perfected efficient ways of draining these unconventional pools over the years at costs that wouldn’t have been possible five or ten years ago. And they’ve grown more capital-efficient as businesses, too – meaning lower breakeven costs and highly attractive margins.

By itself, ConocoPhillips (NYSE: COP), which has been expanding its territory in the region via acquisition, generated $5 billion in net profits last quarter. The company made headlines recently with a hefty $9.7 billion offer for Concho Resources, the largest pure-play shale deal since 2011. Concho shareholders walked away with a nice 15% premium.

COP isn’t the only buyer sniffing around. Larger producers are under constant pressure to add reserves and grow production. Buyouts can be far quicker and more cost-effective than sending seismic survey crews out into uncharted lands in search of new deposits.

Mid-sized players are eager to plant their flag (or expand) here as well.

When I first recommended Pioneer Natural Resources (NYSE: PXD) to my readers in May 2020, the company had already amassed 680,000 Permian acres. But that wasn’t enough. So it recently ponied up $4.5 billion to take control of Parsley Energy, which itself was still digesting the $1.6 billion purchase of Jagged Peak Energy. Almost as soon as the ink on the contract was dry, Pioneer then pounced on Double Point Energy.

Now, it has rights to more than 1 million acres. Pioneer has two dozen drilling rigs plowing full speed ahead, with a goal of completing more than 500 new wells this year. That will still barely scratch the surface of its 15,000+ identified drilling targets. The market price of these unmatched Permian Basin assets has exploded to nearly $50 billion. 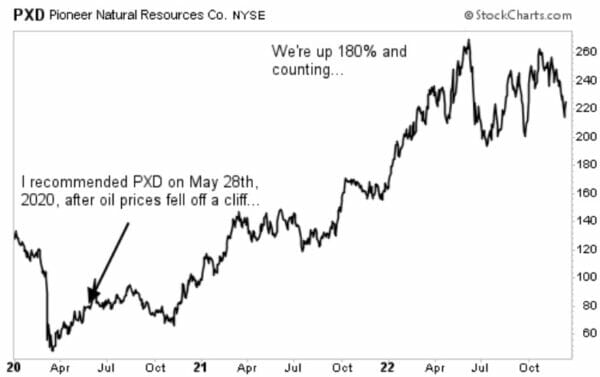 I think this is just the beginning… Because time is running out for deep-pocketed buyers to scoop up the last remaining small players in this region.

That’s why I just released a report about the massive wave of deals we’re likely to see in the coming months – including my top target. This small company is sitting on prime acreage right in the heart of the boom, and it’s sitting on top of one of the largest finds I’ve ever seen…

By getting in now before the rumor mill picks up, investors have the chance to pocket triple-digit gains, practically overnight.