Why 2022 Could Bring A Major Comeback For Gold…

In my first issue of the New Year, I told my premium Top Stock Advisor subscribers that I was a little worried.

Between record valuations, continued signs of inflation, and the fact that the Fed’s massive money-printing experiment is coming to an end soon, there are plenty of reasons to be concerned.

I elaborated on these reasons in a recent interview with my colleague Brad Briggs. So I won’t spend too much time on them today. Instead, I want to focus on solutions.

But just know that I’m not alone in this opinion. For example, there’s also Jeremy Grantham. He’s the co-founder of the asset-management firm Grantham, Mayer & Otterloo (GMO), who’s well-known as a market historian (and bubble expert).

He told Bloomberg Television last month that this was certainly the greatest asset bubble in U.S. history and second only to the Japanese bubble in the late-1980s.

Grantham said, “But in U.S. history, I would say that there’s a bigger buy-in this time to the idea that prices never decline and that all you have to do is buy them than there has ever been, which suggests that when the decline comes, it will be perhaps bigger and better than previously in U.S. history.”

Grantham explained that the money printing has been so enormous that it overwhelmed one of his sure-fire signposts that the bubble was about to burst — rising inflation. The Consumer Price Index (CPI) jumped 7% in December – the biggest increase since 1982.

According to Grantham, in most years that single event (inflation) would have been enough to crash the market. But investors have put all their faith in the Fed and are ignoring these “common” cautionary signs.

What Should We Do About A Potential Market Upheaval

Again, this isn’t meant to scare you. I could be wrong, and so could Grantham. But as I touched on in my interview (and elaborated on more to my premium readers), history has shown us that when the Fed tightens the major indexes tend to fall by about 20%.

If this does happen, the important thing is not to panic. In fact, with a little preparation, we can be just fine either way. As I always tell my Top Stock Advisor readers, we want to have the bulk of our portfolio invested in wonderful companies that generate enormous profits, acquired for reasonable prices.

If we can manage this, then we shouldn’t be too concerned over the long run — and our portfolio is living proof of that.

But along with this, I recently made a bit of a strategic shift with our most recent pick over at Top Stock Advisor by adding some exposure to precious metals.

More specifically, we added one of the world’s premier gold miners to our portfolio.

I won’t reveal the name of this pick just yet – out of fairness to my premium readers. But today, I want to walk through some of the things I look for in a gold miner – and why I think the yellow metal is set to have a major comeback.

The first thing you need to understand about gold miners is that they are a slightly different animal. Unlike most of the traditional companies in a portfolio, they can’t determine what they sell their product (gold) for. They’re at the mercy of the spot price of gold.

On top of that, it’s not cheap to mine for anything. You have to build the facilities, usually located in remote areas, then purchase equipment, secure permits… all of which can quickly add up. And this is all before they can mine a single ounce of gold, which they sell to cover costs and hopefully have some leftover.

And let’s not forget that after all this, what they are producing will eventually run out, so they need to continue finding and developing other gold or precious metal deposits.

But if we keep things simple, we can easily understand what makes a good mining company. They need to get the gold out of the ground for cheaper than what they sell it for.

Fortunately, we don’t have to do much work to figure this out, as the mining companies do all the calculations for us. They boil it down to a key metric called “AISC,” or “all-in sustaining costs.” This tells us exactly what it costs for a mining company to produce one ounce of gold.

Obviously, the production costs need to be less than the price of gold. The wider the discrepancy between AISC and gold prices the more profitable the company is. 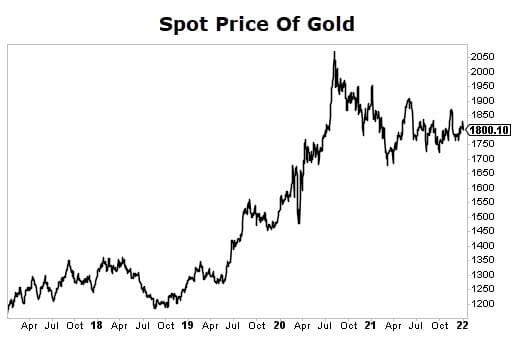 With an AISC of around $1,000 last year, the gold miner we added to our Top Stock Advisor portfolio is one of the best in the business in terms of this metric. (Not to mention it sports a dividend yield of 2.7%, is trading at a nice discount to its historical average and well below its highs set in September 2020.)

Again, I’m not going to go into the name of this pick. But if you want to look into the gold miners, then keep this metric — “AISC,” or “all-in sustaining costs” — in mind as you do your research.

Think about this… in late-2015 the Fed raised interest rates for the first time in seven years. That kicked off a new cyclical bull market in gold. The price of gold went from around $1,050 per ounce to around $1,350 per ounce in just eight months.

The jump in gold prices gets amplified when it comes to gold miners. For instance, over that same period, our pick jumped a whopping 127%.

Remember… gold has functioned as a reliable store of value for longer than any other asset. This longevity may seem like a minor trait, especially in today’s world where short-term thinking has become predominant. However, this quality brings people to buy gold during periods of crisis and uncertainty. Gold has withstood revolutions, wars, and the births (and deaths) of empires.

Last year proved to be a tough year for gold despite the near-perfect conditions. Gold ended the year down 4.2%. But I think it’ll see a big turnaround in 2022. If we see market turmoil this year as the Fed unwinds, you can expect investors to rush back into the yellow metal. In fact, 2022 could be the year gold prices set new records. And even if it doesn’t, we’ll still own a high-quality gold miner that yields nearly 3%.

Editor’s Note: I just released my annual list of “shocking” market predictions for the coming year…

These predictions have led investors to multiple triple-digit opportunities each year. And this could be our most profitable list yet…

In this year’s report, you’ll discover why bond investors could be slaughtered (and one lucrative escape hatch you need in your back pocket NOW)… how a revolutionary breakthrough in air travel could make early investors fabulously rich… and the surprising reason war could erupt in the Middle East.

Go here to discover all of my shocking predictions now.