Back in late November, I wrote that the end of the year is usually a good time for dividend lovers. But the good times keep on rolling…

As I mentioned in that piece, many companies announce a dividend hike around year-end. And a few more will announce one when the calendar flips.

But a select few issue a little “gift” for investors in the form of a special dividend.

In that piece, named two dividend raisers, but held off on sharing the name of a favorite special dividend payer that I shared with my High-Yield Investing readers. Then I followed up in December by taking a deeper dive into special dividends and even named a few of my favorites. And later in the month, I told you about another stock — National Beverage (Nasdaq: FIZZ) — that pays a monster special dividend (despite not paying regular dividends).

So today, I want to keep our streak going by telling you about another special dividend payer I recently shared with my premium subscribers. (Remember, I give my premium readers a head start before sharing them with everybody else…)

With all that in mind, here’s what I’ve found this month…

There is secure, and then there is American Financial Group (NYSE: AFG). The insurer has been rated ‘A’, or excellent, by A.M. Best for more than 110 years – one of only four organizations to make that claim.

The Cincinnati-based company is a leading provider of annuities and property & casualty insurance for commercial clients. It issues specialty policies covering everything from aviation to professional liability and has written nearly $8 billion in premiums over the past year.

Thanks to robust underwriting results, AFG just dramatically upped its forecast and is now expecting to close out the fiscal year with net earnings of $10.10 to $10.70 per share, versus an earlier guidance range of $8.40 to $9.20. That’s a meaningful revision. And it doesn’t include the recent sale of the firm’s annuity division to Mass Mutual for $3.5 billion – a transaction that netted a tidy $656 million after-tax gain.

AFG routinely generates more cash than it needs to conduct its operations, dutifully returning some of the surplus back to shareholders. The board has increased dividends for 16 straight years, most recently authorizing a 12% hike in the quarterly payout to $0.56 per share.

That puts the yield at a rather ordinary 1.7%. But don’t be fooled, because most of AFG’s capital returns are made outside of the normal channels. The company has, quite possibly, the most generous special dividend track record I’ve ever seen.

Last June, the board authorized a massive bonus dividend of $14.00 per share. That was equivalent to 25 regular quarterly dividends all at once. Two months later in August, it followed up with another special dividend of $2.00 per share. At that point, the company had returned $3.8 billion cumulatively to investors over the prior five years.

But it wasn’t done there.

Management dished out a $4.00 per share special dividend last October. And in November, it handed out another $4.00 special distribution. For those of you counting, that’s four special dividends in less than six months. And if that wasn’t enough, here’s the cherry on top — $300+ million plowed into share repurchases over the past year.

This is nothing new. Since 2012, AFG shareholders have been showered with a whopping $40.05 per share in special dividend payments. 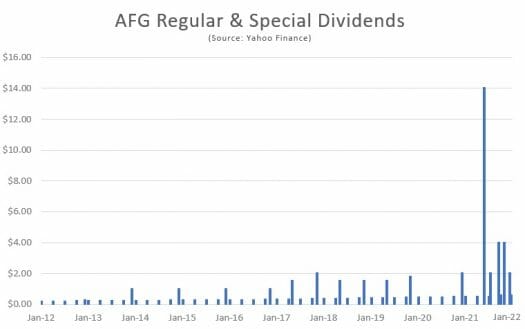 And there’s a lot more where that came from. To quote CEO Craig Lindner, “Our excess capital remains at a significant level, which affords us the flexibility to make opportunistic repurchases and pay additional dividends.”

AFG still has nearly $3 billion in cash and short-term securities on the books. As with any insurer, there is a lag between the day upfront premiums are collected and the time a claim is paid out. In between, the company is free to invest that float money (the secret to Warren Buffett’s riches), pocketing any income and gains.

Most of this portfolio is sunk into floating rate securities, earning a respectable 2.8%. But as we’ve discussed, there are four or possibly even five interest rate hikes on the near-term horizon – each one boosting the earnings power of this multi-billion dollar portfolio.

Remember, just because I highlight stocks that are likely to increase dividends (or in this case, pay special dividends), that doesn’t necessarily make them “buys.” These are merely ideas to get you started in the hunt for high yields. With that said, AFG has been on a roll.

Normally, special dividends are one-off, non-recurring events. But AFG has made them a habit, paying out these bonus distributions every year for the past decade. With a more favorable operating climate, I’m fully expecting that streak to continue in 2022. Despite the run-up in price, it’s still worthy of consideration for investors.

In the meantime, if you want to know about my absolute favorite high-yield picks, you need to check out my latest report…

In it, you’ll find 5 “Bulletproof Buys” that have weathered every dip and crash over the last 20 years and STILL handed out massive gains. And each one of them carry high yields, with dividends that rise each and every year. Go here to check it out now.