Want To Make Big Gains? Look For Companies Rising From The Ashes…

It’s one of the dirtiest words in the financial world…

For some people (and companies), it crushes them. They never recover. And for that reason, any association with that word causes most investors to run in the complete opposite direction.

But for others, they emerge humble, better, and smarter. They rise from the rubble and restore their reputation and go on to do great things.

Rising From The Ashes

Take the case of Samuel Clemens, for example. Back in 1885, and Mr. Clemens had it all… He was fabulously wealthy and famous. On top of his fame, he and his wife had inherited a fortune from her family.

Oh, and he was also the best-known author on Earth. 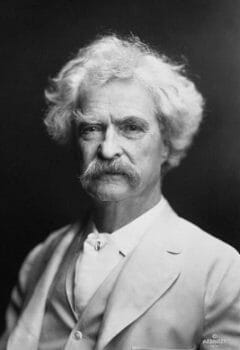 Most people knew him by his pen name: Mark Twain. He had already published Adventures of Huckleberry Finn, which established him as a major author, as well as The Adventures of Tom Sawyer.

On top of that, his publishing company — Charles Webster & Co. — had secured the rights to President Ulysses S. Grant’s memoirs. That became the best-selling book in the history of American publishing up to that point.

As the money poured in from his publishing company as well as the royalties from his own books, Clemens retired from writing and lecturing. He settled into a lifestyle of lush consumerism.

In 1889, Clemens published his fifth novel, A Connecticut Yankee in King Arthur’s Court. It was a flop. Clemens claimed not to care. He called the book his swan song. Clemens was now a businessman and turned his attention towards his investments.

He threw a wad of cash at a steam-generator venture. Another large chunk at steam pulleys. He made bet on a maritime telegram as well as a new engraving venture. His biggest bet was on the Paige Compositor, an electronic typesetter that had 18,000 moving parts and could do the job of six men.

Ironically, Clemens passed up on the opportunity to invest in a new invention, the telephone, and its creator, Alexander Graham Bell.

As you can probably guess, things turned sour…

By Christmas 1890, the best-known author on Earth had lost almost all of his wife’s inheritance. He had taken out loans against the assets of his publishing company, and could not find anyone to loan him money. In 1894, Clemens declared bankruptcy.

All told, Clemens’ debts amounted to more than $200,000. And he simply couldn’t cover them. But pride was at stake here, as well as the family name. So, Clemens publicly guaranteed he would pay all his creditors in full, even though he wasn’t required to do so under bankruptcy law.

He could have easily slipped into the shadows, disappeared, and finished out a despondent life. After all, he was north of 50 years old. However, instead of sulking, the disgraced Samuel Clemens dusted off the Mark Twain brand and got back to work, using his writing and the lecture circuit to regain his financial footing.

Twain hated the lecture circuit, but it didn’t matter. He would embark on a five-continent tour. And after just one year on the road… Mark Twain had paid back $35,000 of Samuel Clemens’ debt. By the fall of 1900 — a little more than five years after hitting the road — he repaid the last of his debts.

Twain emerged from bankruptcy and returned to the U.S. a bigger star than before. After enduring a decade of trials, he had entertained dignitaries and socialites around the world, and earned nothing but respect.

What We Can Learn — And How We Can Profit

I bring all of this up to point out that bankruptcy does not necessarily mean the end of the story. That’s true for some people as well as companies. In fact, in some rare cases, it can lead to an incredible opportunity.

If you’ve invested in the market long enough, you’ll learn that some of the best investment returns of all time can be found in the wake of a crisis.

I’ve touched on this theme several times over at Top Stock Advisor, my premium advisory. In fact, in this piece, I wrote about how a tragic wildfire in California led to the largest bankruptcy for a utility in U.S. history, as it faced tens of billions in fire-related claims.

That company, by the way, is PG&E (NYSE: PCG). And as I explained to my premium readers back in June of last year, new reforms at the state level in California led to the creation of an insurance pool to deal with claims like this in the future. And that meant the worst we’re likely to ever see has already happened.

Here’s what I said in that piece:

You see, utilities are a fairly predictable business. Since they’re heavily regulated, we can reasonably estimate how much the company will earn, and assign a reasonable valuation based on the industry norm to come up with a price target. So removing the prospect of a major liability from an unpredictable event like this is huge.

It offers us an opportunity for 100%-plus upside in the coming years… from a utility. That rarely happens — ever. And that’s why we added this hated company to our portfolio over at Top Stock Advisor.

As I write this, we’re up about 8% on our PCG “crisis” investment so far. We don’t know whether this one will actually pan out — only time will tell. But I like our chances… 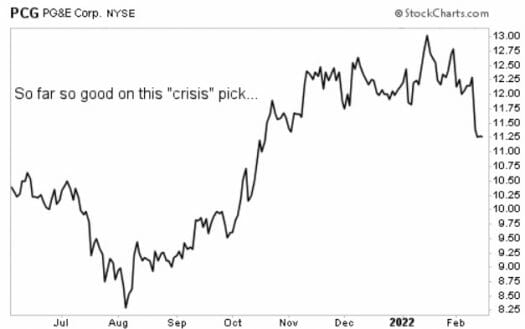 Bankruptcy certainly falls within the definition of a “crisis”. But we could be talking about anything, like a political crisis or even, ahem, a global pandemic. The point is, if you want to make some truly incredible gains in the course of your investing career, then you need to look for “crisis investing” opportunities like this.

Now, I want to make one thing clear. This way of investing doesn’t come without risk, and it may take a few years to play out. But the upside can be huge.

Not every pick we make over at Top Stock Advisor falls into the “crisis” category. In fact, most of our picks are solid companies with killer business models that will deliver high, steady returns to investors year after year. That’s how you should build the bulk of your portfolio…

But occasionally, we look for opportunities like this — and more often than not, it works out very well. In fact, I recently told my premium readers about another “crisis” opportunity in a recent issue — this time in the energy sector. And you’ll find a number of “crisis”-related picks in my latest report of investment predictions for 2022.

Go here now to get the details.