Over at High-Yield Investing, we have a stock in our portfolio that just might have the blandest name imaginable.

Perhaps that’s one of the reasons why it’s been so ignored by investors. Well, that and the fact that up until recently most investors have been focused on the high-growth tech sector.

But with value and income names coming back into favor, I think that may change very soon…

That’s because while the name may be a little bland, the same can’t be said about its food. And one chain in particular has been attracting more diners than ever.

QSR At A Glance

RBI is the corporate parent of four dominant quick-serve restaurant chains. If you’ve ever eaten a Whopper, then you’ve helped contribute to the firm’s bottom line.

RBI owns the iconic Burger King name, which has been licensed to nearly 19,000 franchise outlets since its creation in 1954. It trails only McDonald’s as the world’s second-largest burger chain.

Spurred in part by the opening of new locations, Burger King is posting some of the strongest sales growth in company history. That alone should be enough to gain your attention, but RBI owns three other major brands in the quick-serve business.

RBI gets an even bigger financial contribution from Tim Hortons, the beloved Canadian coffee and donut vendor. There are nearly 5,000 units across North America, most of which are located north of the border. While known primarily as a breakfast shop, most locations also offer soups, salads, and sandwiches.

Then there’s Popeye’s, the New Orleans-inspired chain that pioneered spicy fried chicken, served with delectable sides such as red beans and rice. Popeye’s threw down the gauntlet in the chicken sandwich wars last August, launching a seasoned fillet on a buttery brioche bun that became an instant sensation.

And just recently, a fourth brand was brought into the fold.

QSR recently spent $1 billion to acquire Firehouse Subs. Started in 1994 by a pair of firefighters, the chain offers soups and salads but is best known for its hot, melty sub sandwiches. It would seem the timing couldn’t have been much better. The quirky but delicious sub shop just posted an impressive 14.7% increase in same-store sales – led by a 20.9% surge overseas.

Burger King wasn’t far behind at 11.3%, while Tim Horton’s (Canada’s favorite coffee and donut vendor) reported a 10.3% improvement. Popeye’s saw a mild 0.4% dip in same-store sales, but that’s only because of tough year-over-year comparisons. The “Louisiana Kitchen” chain had been carrying QSR lately, thanks in no small part to its wildly-popular spicy chicken sandwich.

By definition, same-store sales (or “comps”) only compare the performance of units that have been open for at least 12 months. That effectively strips out the impact of expansion. But consider that QSR has cut the opening ribbon on 1,200 locations over the past year.

Add those new stores to the mix, and you can see why company-wide sales across all four chains have increased by 14% and now tops $30 billion annually. Online apps and other digital orders account for almost one-third of that, jumping 65% last year to $10 billion.

Of course, most come from independently-owned locations. But all of those franchise owners send the parent a regular cut of their sales in the form of royalty payments. And the profits are piling up.

Meanwhile, management just increased QSR’s quarterly dividend to $0.54 per share. For context, that’s a payout ratio of 72% on the normalized annualized earnings of $2.69 per share, and it consumes just 41% of free cash flows. 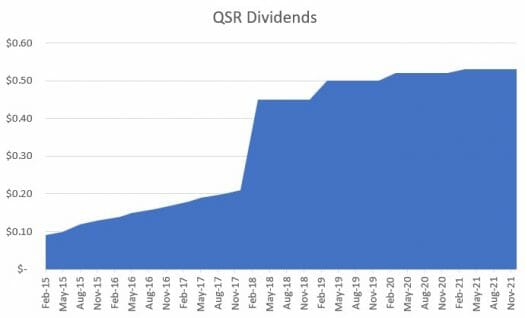 While the dividends have been marching higher, the stock has recently retreated from the mid-$60s to the mid-$50s – elevating the yield to nearly 4%.

I want to point back to something I wrote back in August 2020. In that piece, I made the case for why investors (particularly income-minded investors) would be wise to give the quick-service restaurant (QSR) industry a good, hard look.

“For one, it is largely immune to economic shocks. In fact, it can be counter-cyclical. The worse things get, the more inclined people are to eat off the value menu. During the brutal recession of 2008, for example, McDonald’s (NYSE: MCD) sales growth accelerated from the prior year.”

Now, I’m not saying that we’re headed for a recession or anything like that. It’s just that this industry tends to hold up well in just about any economic environment. And while the names associated with fast food may not impress you right away with their dividend yields, they can turn out to be incredible dividend-growth stories for investors.

But with nearly 30,000 locations worldwide among its four iconic brands, and with more royalty income pouring in, QSR should be a relatively safe bet for investors at these levels.

As I’ve said before, if you want to build real long-term wealth in the market, then you need to own dividend-payers that can hold up no matter what the market throws at them. And as much as I like QSR, there are 5 “bulletproof” dividend payers I like even better…

In my latest report, I profile 5 of my favorite dividend payers that have weathered every dip and crash over the last 20 years and STILL handed out massive gains.

If you want to build a safe, high-yielding portfolio that can compound and throw off thousands of dollars in extra income every year, then I can’t think of a better place to start. Go here to check it out now.