Usually, only a handful of days pass by in between check-ins with my premium readers. But as we’ve seen recently, a lot can change in the world in just a few days.

Obviously, the big topic right now is Russia’s invasion of Ukraine, which has put much of the world on high alert. There’s a lot to unpack: nuclear threats, Russian cyberattacks, how the sanctions will affect the global economy, or even what China might do (and of course the human cost).

In the background of all this, we still have soaring inflation, with the latest Consumer Price Index (for January) at 7.5%. The hottest inflation reported in nearly four decades. And we all know the “real” inflation rate is far higher than that.

Then there are the supply-chain bottlenecks wreaking havoc across nearly every industry. And of course, we are still patiently waiting for what the Federal Reserve is going to do with interest rates and turning off the printing presses. (As of this moment, they continue to print tens of billions of dollars, purchase bonds, and bloat its balance sheet… nearly $9 trillion and counting.)

The uncertainty from all this is enormous. And the markets have responded with daily temper tantrums. We’ve seen stocks gyrate on a daily basis.

I’m Glad We Followed The Trend

From a financial and portfolio perspective, I’m glad that we’ve loaded up on energy and commodity stocks over at my premium service, Maximum Profit. While the Dow Jones is down 9.6% on the year, the S&P 500 down 11.8%, and the battered tech-heavy Nasdaq down 18%, we don’t have a single holding in the red.

Now, I don’t say this just to pat ourselves on the back. We know the tides can turn and this won’t always be the case. But, it seems we rotated out of tech and into energy at a perfect time.

And the former poster-child technology ETF, ARK Innovation (NYSE: ARKK), continues to slide lower. The ETF is down around 60% from its highs. 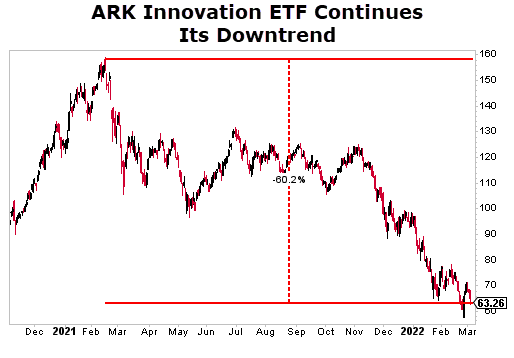 The continued fallout in tech stocks shouldn’t be a surprise to readers. I’ve warned repeatedly since January that tech stocks could fall further. I’ve also cautioned that it’s a fool’s game to try and find the bottom in our once-darling tech stocks. The bearish signals and momentum are just too strong to ignore right now.

Momentum is great… as long as it’s on your side. But it does work both ways.

What To Focus On Instead…

But here’s the good news…

As we know momentum continues to favor the energy space. And as long as the trend is in place, this is where you should be focusing your attention.

That’s exactly what we’ve been doing over at both of my premium services. In fact, I’ll give you one name you might want to investigate further that’s already delivered some stellar returns in a short period of time.

Chevron (NYSE: CVX) doesn’t need much of an introduction. The company has been around since 1906 and is a major player in the oil and gas space.

Chevron captures nearly the entire cycle. Combined these operations pulled in $94 billion in sales in 2020, and the company finished out 2021 with $155.6 billion in sales, a nice year-over-year bump.

So, the company has already been showing strong growth leading into 2022. And if oil prices remain elevated, it could blow these numbers out of the water once again.

Consider this… despite the furious run-up in shares, CVX still trades at a very reasonable 17 times trailing earnings, and 14 times estimated earnings this year.

To top it off, Chevron boasts a nice 3.6% dividend yield. And in today’s low-interest environment, investors flee high-growth stocks they typically turn to stable dividend-paying companies like Chevron.

All of these tailwinds are helping the stock reach new 52-week highs: 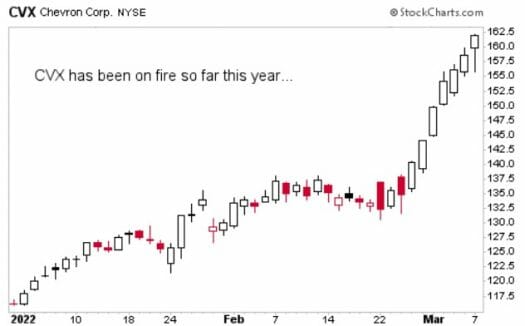 Over at Maximum Profit, we’ve already made close to 30% in CVX since adding it at the beginning of January. And as long as prices stay elevated, the set-up looks good for continued gains.

Could the price of oil drops significantly, causing investors to sell off shares of oil-related companies like CVX? Sure. But given what’s going on in the world right now, it doesn’t seem likely any time soon.

The point is, practically all of the positive momentum in the market right now is in the energy sector. That makes stocks like CVX a good bet for additional upside.

And if you’re looking for a pick in the oil patch with even more upside potential, then you need to see this…

My colleague Nathan Slaughter has been telling his readers about a small oil company that’s sitting on one of the biggest oil finds on record out in West Texas.

His pick is already up 20% and has a lot more room to run – especially if a bigger player comes calling with a buyout offer.

Get all the details right here.