For most, June 11, 2020, is probably a faint memory that doesn’t evoke much meaning.

It was just four months after the harsh realities of Covid-19 emerged — and shut down — our world. We were just over two months removed from the fast and furious stock market meltdown that took place in March of that year. You know… the one that saw the S&P 500 crater over 30% in a matter of weeks.

But on that date — just over two months after one of the most vicious market crashes in history — the S&P 500 had already rallied over 34%. Two months later, in August, it would recover all its losses. 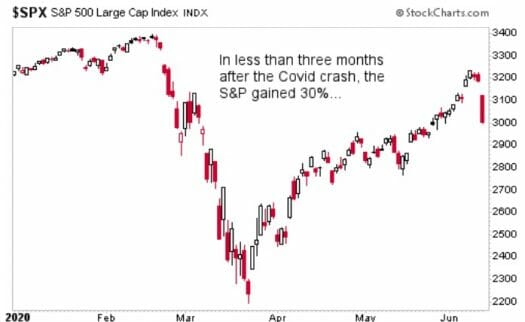 As astonishing as that is, it’s not even the craziest part. That belongs to the outrageous gains we were seeing in many individual stocks.

I’m talking about the ridiculous 464% return in just 7 months from Zoom Video Communications (Nasdaq: ZM). Or the fact that many of our newest portfolio additions were surging 25%… 50%… 75%… and even 100% in a matter of weeks or months.

Back on that day, I told my premium subscribers that what we were seeing was “absolutely nuts…”

Of course, I don’t mind it when my stock picks shoot up like what was happening back then. But I also warned that we shouldn’t get used to these sorts of returns. In fact, I said, “But understand that these are unusual times. This isn’t normal. Don’t set your expectations to always see these sorts of exceptional returns this quickly.”

It might not have made me the life of the party, but it was a dose of reality that was needed during unprecedented times both in our lives and in the market. I didn’t want my readers to get caught up in the seemingly “normal” routine of near-daily stock advances. In the stock market euphoria. And more importantly, I didn’t want them to lose money by ignoring stops and sell signals, opting instead to ride those stocks all the way back down.

What Causes Investors To Throw In The Towel

I compare the summer of 2020 to driving down the freeway at 80 miles an hour. Everything is going smoothly. But then you hit some traffic and it feels like you’re going so slow, you glance down and realize that you’re still doing 60… even though it feels like 25.

This will be the biggest issue to newer investors who have jumped into the game while sitting at home during the health pandemic. They decided to get into the stock market at precisely the right time. But the current market environment is likely driving them nuts. No patience. Jumping in and out of trades. Many of their stocks are no longer going up, but falling deeper in the red.

Trust me… they will eventually throw in the towel and move on to their next hobby.

You see, the stock market is a fickle beast. And for many people, uncertainty causes a lot of anxiety. When times get tough, and markets are turbulent or crashing you have to keep a cool head. You must follow your trading rules or stops.

Building wealth as an investor doesn’t come from making rash decisions. Both on the way up and especially on the way down. Sure, maintaining a portfolio takes good trade or investment ideas… But it also requires a careful balance of risk and reward.

When the market is rising — and we get that euphoric dopamine rush — it’s easy to forget discipline. It’s easy to get greedy. The best investors are the ones that keep a cool head. Remain disciplined. Stick to their trading rules and trading plan.

If you can do this consistently, then you don’t have to worry about the market’s uncertainty. You know — and accept — its uncertainty, because you remember the euphoric times and you remember the tough times. And you know that what’s kept you in the game this long is your emotional stability and discipline.

If you’re a regular reader, then you know I’ve been pounding the table about the energy sector since January. I told readers that rather than continue to hold onto hope by sticking with their formerly-hot tech stocks, they would be far better off looking to oil & gas stocks for gains.

The energy sector is still the clear market leader. But we’re starting to see some major volatility in the space… for example the price of oil shot up to $130 per barrel earlier this month. It’s dropped below $100 a barrel last week before rebounding to about $110 as I write this. 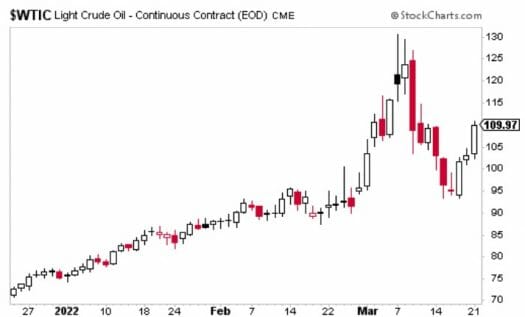 Now, here’s why I bring this up…

I’ve made a series of recommendations in the energy space over at my premium services. And those picks are paying off handsomely right now. If you’ve done the same, then good for you. But just remember, generally speaking, as the price of oil goes, so too will our energy plays. That’s great when prices are moving higher, but it also means that we may be in for a bumpy ride.

There will be exceptions, of course. For example, one of our recent additions, Occidental Petroleum (NYSE: OXY), is having a strong day today after it was revealed that Warren Buffett’s Berkshire Hathaway (BKR.B) spent another $1 billion on the stock, increasing its stake to 14.6% of the company. The stock is working back towards new highs and is maintaining its strong momentum.

But since we have so much exposure to the oil and gas industry, you may want to start looking for picks in other sectors to offset the volatility if the recent choppiness continues.

The point is, if you’re enjoying some big gains in the energy sector right now, that’s great. But don’t get too carried away by emotions. Remember that the ride up can’t last forever. Establish some profit targets, don’t be afraid to cash out some gains here and there, and don’t forget to look to other areas of the market for new opportunities for good measure.

P.S. A few months ago, I decided to go “rogue” and gather a team to research what the best opportunities for the coming year. And what we found might shock you…

After months of research, we’ve finally released our results — in the form of 7 shocking market predictions for 2022 (and beyond). They run counter to conventional wisdom and are the most controversial market calls I’ve made in years… Past predictions have handed investors a shot at raking in 622%, 823% and even a whopping 1,168%.

How much could this year’s predictions bring in? See for yourself here.