Everybody wants to do it. A lot of people attempt it. And most end up losing money.

I’m talking about bottom fishing in the stock market.

I get it. The temptation is so strong that even I have attempted on multiple occasions to invest in companies that have fallen on hard times. Unfortunately, if you don’t go about this the right way, it doesn’t bear much fruit.

I should also note that there is a distinction between simply “bottom fishing” and “crisis investing,” which I talked about here.

Either way, trying to bottom fish in the market can be frustrating, and it’s often a money-losing proposition.

I’ll explain more in a moment. But first, let’s take a brief survey of where we’re at with the market, and why I think it could be dangerous to chase some of the market’s previous high-fliers as they drift downward…

There’s a lot that is keeping the markets on edge. We have rising rates that have folks concerned, quantitative tightening, inflationary pressures, supply chain issues, Russia-Ukraine tensions, and of course Covid-19.

Oh, and earnings season… which has produced some gut-wrenching swings in share price. Just look at the price action of Facebook (Nasdaq: FB) and Netflix (Nasdaq: NFLX):

If you’ve been following along for the past couple months, then you know that I’ve not only warned about this — but I’ve even gone on record saying that tech stocks could have even further to fall from here.

Of course, nobody has a crystal ball when it comes to these things. So I’m willing to leave some room for the possibility for me being wrong.

But while the broader indexes are taking it on the chin, there is one sector that continues to reach new highs. And it’s where I’ve been focusing the bulk of my attention lately…

The Cost Of Going Against The Trend…

Before I get into that, let’s rewind back to mid-2019. Back then, nearly everything in the market was doing great. Heck, even the Utility sector was up nearly 16%.

Instead of swimming with the tide, however, I decided to do some bottom fishing in the energy sector.

Here’s what the sector returns looked like halfway through 2019: 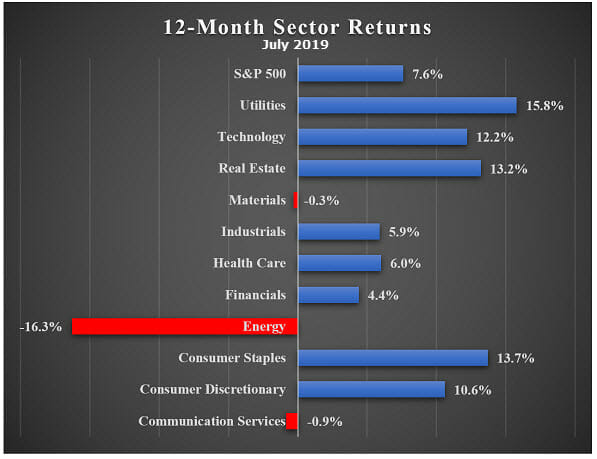 As you can see, while most everything was doing great, energy was sucking wind. But there had to be some good deals in there, right?

I tabbed Occidental Petroleum (NYSE: OXY) as a pick that I thought could rebound. The stock had fallen over 40% from its recent high. This is what the chart looked like at the time… 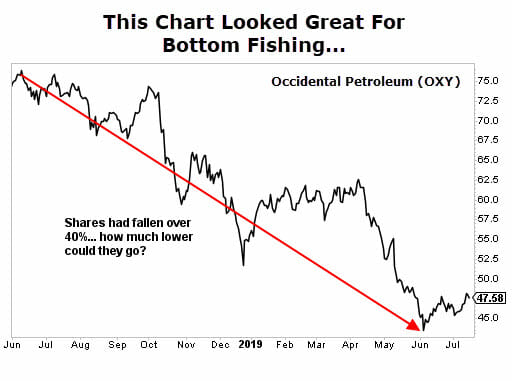 The temptation was too strong. The financials looked good, it was trading way off its recent high, and surely couldn’t fall much further, right?

Wrong. It continued to fall. In fact, it eventually slid a whopping 77% from the date I originally purchased. So much for “catching the bottom.” Lesson learned.

It’s possible we’re at a similar moment with the tech sector. And while I could be wrong, I’ve found it far better to go with what’s “working” in the market.

Which leads me back to the energy sector today.

Here’s the exciting thing about the energy sector. It’s a boom or bust industry. And when it’s booming, the returns can be spectacular. You just have to be patient and not jump in too early. As I’ve shown you, trying to catch the bottom is a tough endeavor. It’s much better — and more profitable — if you wait until the trend is on your side.

The Tide Has Turned

Remember the table I showed you above from 2019 where energy was the worst-performing sector? Well, here’s what it looks like today… 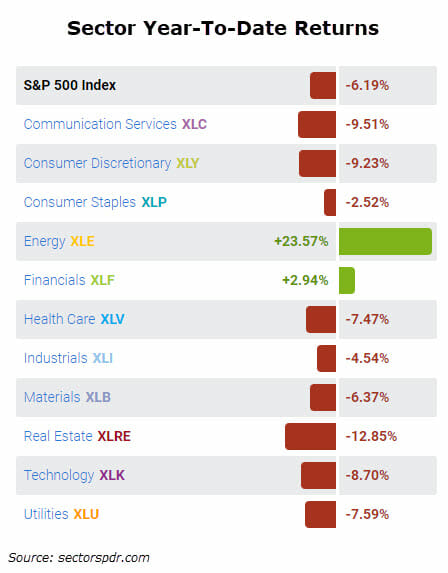 Leading the charge is energy. Sure, we’re only two months into 2022, but even looking back one year, energy is still the top-performer, clocking in a wonderful 52% return.

And here’s the thing… I think there’s still plenty of room to run.

Consider a name like ConocoPhillips (NYSE: COP), for example. COP generated $45 billion in sales in 2021. This is a massive increase over the $18.7 billion it produced in 2020. Obviously, the price of oil during the onset of the pandemic was a lot lower, which drastically affected 2020 numbers. But regardless, $45 billion is a big sales figure that even topped the $32.4 billion it brought in from 2019.

My colleague Nathan Slaughter talked about another thing that should excite income-minded investors… Management recently announced that it will introduce a fixed-plus variable dividend policy (you can read Nathan’s take on it here). All told, COP expects to return $8 billion to shareholders through cash dividends and share repurchases.

The stock is also trading on the cheap end (15 times trailing 12 months earnings) and only 10.6 times next year’s earnings.

Climbing oil prices, operational efficiency with surging cash flow, shareholder-friendly, and low valuations — all of these factors are providing tremendous tailwinds for COP as well as a host of other names in the energy sector.

The trend is clear: investors are cashing out of pricey tech stocks and looking for companies trading at a better bargain. You can still find that in the energy sector.

In other words, now is the time to be loading up on energy stocks. In fact, I’ve already started adding some names from this sector to the portfolio in my premium services… but I’m looking to load up even more.

P.S. Last year, I decided to go “rogue” and gather a team to research what the best opportunities for the coming year. And what we found might shock you…

After three months of research, we’ve finally released our results. In my latest report, you’ll find 7 shocking market predictions for 2022. They run counter to conventional wisdom and are the most controversial market calls I’ve made in years… Past predictions have handed investors a shot at raking in 622%, 823% and even a whopping 1,168%.

How much could this year’s predictions bring in? See for yourself here.