Warren Buffett’s New Favorite Energy Stock — Should You Buy It?

Great minds think alike. That’s the thought I had when headlines came out reporting that Warren Buffett was adding more shares of one of my favorite oil & gas stocks.

In all seriousness, I’m not really comparing myself to the Oracle of Omaha. But still, it’s nice when one of the all-time greats likes one of your picks. In fact, according to CNBC, Buffett has been buying practically all he can get his hands on.

And who can blame him? After all, oil prices have been on one of the hottest bull runs in recent memory. And what’s more, even after a recent run-up, this stock is still cheap.

I’m talking about Occidental Petroleum (NYSE OXY). As CNBC reported, Berkshire Hathaway initially disclosed in a 13F filing with the SEC that it purchased roughly 29 million shares (worth about $5 billion) sometime earlier this year. But beginning sometime in March, it began buying the stock by the bushel.

Now, that stake stands at 136 million shares, worth a little more than $8 billion (more than 13% of the company).

As I’ve told my Maximum Profit premium readers before, this is a stock I’ve had a love/hate relationship with over the years. I’ve both made good money and lost good money with it.

The times I’ve lost money on it were when I made the mistake of “bottom fishing,” a topic I’ve warned readers about before. But since momentum is in our favor, it’s worth asking… is the stock worth looking at today?

For those who are unfamiliar, Occidental is a mid-sized oil company. Its principal businesses consist of three segments: oil and gas, chemicals, and midstream and marketing.

Its oil and gas segment explores for, develops, and produces oil and condensate, natural gas liquids, and natural gas.

Most of the firm’s oil and gas assets reside in the Permian Basin in Texas and New Mexico. It has other operations, both in the U.S. and internationally, but its 2.9 million net acres in the Permian are OXY’s bread and butter. As you may know, the Permian is one of the largest and most active oil basins in the United States. It accounts for nearly 40% of all oil production in the U.S., and nearly 15% of its natural gas production. 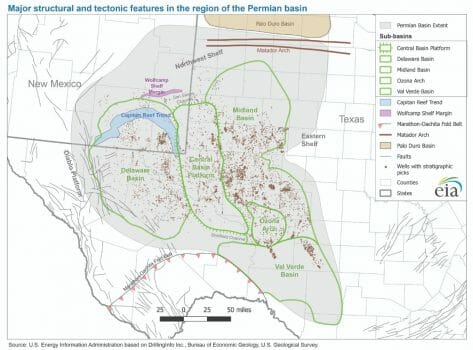 Between all its segments, Occidental pulled in nearly $26 billion in revenue last year, which was a 51% increase over 2020. Granted 2020 was a down year with Covid, and higher oil prices in 2021 definitely helped contribute to that sales growth.

However, higher oil prices mean bigger profits. For instance, last year Occidental pulled in $10.4 billion in cash flow, a stark contrast to the nearly $4 billion it made in 2020, and still a big increase over the $7.4 billion it generated in 2019.

The strong financial performance has led the company back to dividend increases — it slashed its dividend in 2019, which caused the stock to tumble. Granted, you may or may not be interested in the dividend. But that, along with soaring oil prices, has attracted a flood of investors, which is propelling the stock to new highs. 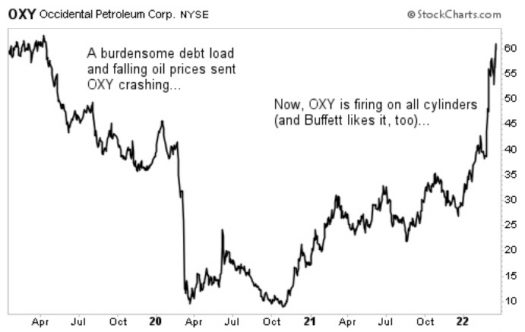 As you can see the stock (along with most oil-related stocks) has been surging to new highs as the price of oil jumped over $100 per barrel on news of the Russia/Ukraine war. Of course, having Berkshire Hathaway buy billions of dollars worth of stock helps, too.

Earlier this week, I discussed how I’ve spent a lot of time making recommendations in the energy space since January. I hope you took advantage. And since things don’t seem to be settling down too soon, this bodes well for the price of oil and oil-related stocks. So there may still be some time to enjoy the ride.

But remember, in that piece, I warned readers not to get too euphoric about all those nice gains. There’s nothing wrong with riding the trend, provided we go into it with clear eyes and an understanding of the possible risks.

Obviously, like all E&P plays, shares are tied closely to the price of oil. So as goes oil so goes shares of Occidental. Also worth noting is that exploring and drilling for oil is capital intensive, and Occidental carries a big ($30.4 billion) debt load. But management has been taking advantage of higher energy prices (and cheaper borrowing rates) to reduce the burden.

With that said, here’s the really interesting thing… Despite the recent runup in energy stocks, many of them are still trading for relatively cheap valuations – especially OXY. The stock trades for around 15 times next year’s earnings, which is extremely reasonable.

Energy stocks are poised for a big year. And if oil prices remain high, it should have no problem blowing those 2021 numbers out of the water. If you’re looking to ride this wave to more profits, OXY is a solid choice to consider.

But if you’re looking for a pick in the oil patch with even more upside potential, then you need to see this…

My colleague Nathan Slaughter has been telling his readers about a small oil company that’s sitting on one of the biggest oil finds on record out in West Texas. He says it could lead to the “the mother of all oil booms” – and so far, his prediction is proving correct…

In his latest report, Nathan will pull back the curtain on this massive boom, tell you why we’re about to see a massive wave of deals here, and tell you about the one small company that’s right in the heart of all the action. By getting in now before the rest of the crowd, you could pocket triple-digit gains, potentially overnight.