A couple of days ago, I wrote an article talking about why it doesn’t really do investors much good to buy into the panic when markets are experiencing volatility.

I also said the same thing is often true when you’re looking at powerhouse companies that make loads of cash. If for some reason investors are down on the stock, it often means you should take a deeper dive. Because if the crowd is wrong, then it could be an opportunity to make big-time gains.

When I made that argument, I gave the example of Apple around 2015. You may not remember it, but the tech giant was getting constant negative press in the financial media.

We all know what happened next.

What’s Going On With Meta?

As you might be aware, shares of Meta Platforms (aka Facebook) have been crushed. Since last September’s highs, the stock has nosedived by over 50%. That’s a hell of a haircut for a company that once had a trillion-dollar market value. 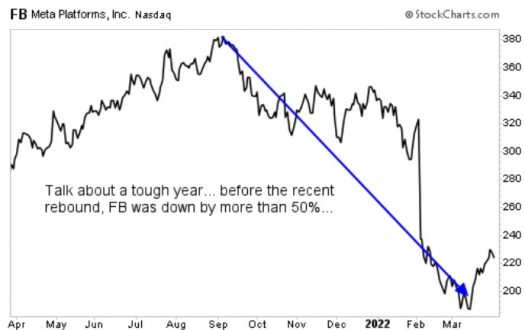 To be fair, the company has made its share of missteps. It has been under the microscope for the last few years. Whether it was the Cambridge Analytica scandal in 2018, antitrust issues that have followed the company around, calls for the social media platform to better moderate the content and ads that it allows, and leaked documents by a former employee, to name a few.

The company is trying to get out from under this dark cloud. It’s even gone as far as changing its name from Facebook to Meta Platforms.

The sentiment surrounding the company couldn’t more pessimistic. And when Meta reported its latest quarterly results, which analysts found disappointing, investors piled on, sending shares down over 25% in one day.

The company reported fourth-quarter and full-year results on February 2. The big focus was how much Apple’s privacy changes would affect Meta’s advertising revenue.

The answer: it did.

Meta’s earnings missed the consensus estimate. It was the first miss since the first quarter of 2020. Expectations were for earnings per share of $3.84. Actual earnings came in at $3.67 per share, a 4.4% miss. Revenue of $33.7 billion during the quarter was a small beat of the consensus of $33.4 billion.

To make matters worse for the company, its revenue guidance was also weaker than what analysts had anticipated. First-quarter revenue is expected to be between $27 billion to $29 billion, with expectations looking for $30.15 billion.

It’s easy to see why there’s so much gloom surrounding the stock. And it seems like the company continually shoots itself in the foot. But let’s pull back the blanket of cynicism and see if there are any bright spots…

What The Other Numbers Say

Sure, the company missed expectations. But hidden beneath the “bad” numbers reveals that this company is still growing and producing massive amounts of cash.

Meta isn’t saddled with debt either. It has $14.4 billion in total debt with $48.1 billion cash on hand. For perspective, it has more cash on hand than the entire value of Hershey (NYSE: HSY).

Also, despite missing estimates for its active user numbers, its daily and monthly active user figures all grew during the fourth quarter on a year-over-year basis.

Take a moment and forget about Meta’s baggage. Think about its business and financials. This is an advertising juggernaut that produces cash almost as fast as the Federal Reserve prints it.

Are humans going to spend less time scrolling Facebook, Instagram, and messaging on WhatsApp? As nice as that might be for society, I don’t see it happening.

Yes, there are competitors like Snap (NYSE: SNAP) and TikTok trying to steal eyeballs away from Meta’s family of apps. That can’t be ignored. But Facebook is still the go-to when it comes to advertising.

Meta’s Reality Labs is no slouch either. This is the division that includes augmented and virtual reality and related consumer hardware, software, and content. And although it is a tiny fraction of overall sales, this segment has grown from $500 million in 2019 to nearly $2.3 billion last year.

Everyone knew that Meta couldn’t keep its breakneck pace of sales growth forever. This year sales are expected to grow “only” 12% year-over-year, which is a major departure from its five-year historical average of 33% growth.

But is that slowdown enough to slice the company’s value in half?

Recall that Apple actually saw a decline in sales, too. And quite frankly Apple’s sales growth over the last five years has been nothing to write home about, with a compounded annual growth rate of 11%. Yet, over the same period shares are up over 500%.

As I write this, Meta’s trailing P/E is just 13.6, a far cry from its five-year historical average of 30.8. Its forward P/E is 14.6. Its enterprise value to earnings before interest, taxes, depreciation, and amortization (“EV/EBITDA”) multiple is just 8.7. Price-to-free cash flow is just 13.7. Pick just about any metric, and it looks cheap.

To me, it seems that this could be another “no-brainer” investment that we will look back on and either be glad we invested or bummed we missed out.

To be sure, shares of Meta could certainly go lower, and the company continues to face some headwinds. But it’s hard to argue that the stock doesn’t look incredibly enticing right now.

In the meantime, I just released a special presentation about Elon Musk’s latest project, and how it could unlock a new revolution in connectivity and disrupt the $2.5 trillion telecom industry…

By now, you’ve probably heard about Starlink and its breakthrough new “Low Earth Orbit” satellites that will bring hyper-fast internet to millions. And while Starlink isn’t tradable (yet), I’ve found a “secret partner” that’s absolutely crucial to getting the project off the ground.

Get the details on how to profit right here.