In the early 1920s, Dr. Frederick Banting had an idea that ended up changing the world. It’s no stretch to say that millions of people wouldn’t be alive without his discovery.

In the summer of 1921, Banting (along with his lab assistant, Charles Best) removed the pancreas from one of a dog in their lab so it would develop diabetes. They took another pancreas, sliced it up, and tossed the pieces into a mixture of water and salt. They threw the concoction in the freezer. Once it was partially frozen, they ground up the cocktail and filtered it.

They then injected this extract into the diabetic dog. Almost instantly the dog showed signs of improvement. It regained its strength and showed lower blood glucose levels. By injecting the dog a few times each day, they were able to keep the dog alive and free of diabetic symptoms.

Thrilled with the outcome, they tested using the pancreas of pigs and cattle to create more of the extract. The next step was to try it out on humans. So they did the unthinkable… Banting and Best injected themselves with the extract (neither suffered from diabetes, but they were completely fine).

The first trial patient was a 14-year-old boy named Leonard Thompson. Up to that point, Thompson was on the verge of death. Thompson weighed less than 65 pounds. The only existing treatment for diabetes at the time was a strict diet and fasting. Even that would only buy an extra year or two.

This was the experience of many before the discovery of insulin.

So on January 11, 1922, with only days left to live, Thompson became the first person to receive Banting and Bests’ cocktail. After tinkering with the dosage, Thompson immediately showed signs of improvement. He regained his strength and appetite. And best of all, he lived a longer life.

News of the successful treatment of diabetes with insulin spread rapidly, winning the Nobel Prize in Physiology or Medicine in 1923.

Although it is not a cure for diabetes, insulin is one of the greatest discoveries in medicine. It’s saved countless lives.

Today, millions of people around the globe are living with diabetes. And that number is, unfortunately, growing by the day.

The good news is that thanks to the power of innovation, there are a number of innovative companies out there working to treat this “hidden” epidemic and make life more manageable. And that spells a huge opportunity for investors…

Before we go any further, let’s get a little Diabetes 101 out of the way…

When we consume food, and more specifically carbohydrates, our body breaks it down into simple sugars (mostly glucose) that circulate in the bloodstream. The pancreas produces insulin, which helps the sugar flow into our muscle cells and other tissues, where it is used for energy.

In short, after meals the pancreas pumps out insulin to regulate any glucose in our body.

Type 1 diabetes is less common than Type 2, but there is currently no known cure, and it must be treated. Everyone with Type 1 diabetes — more than 1.6 million Americans — requires regular insulin injections.

With type 2 diabetes, cells don’t respond normally to insulin — known as “insulin resistance.” In an attempt to get those cells to respond, the pancreas produces more insulin. As this vicious cycle goes on, eventually the pancreas can’t crank out enough insulin, and your blood sugar rises. This leads to prediabetes, which can turn into type 2 diabetes.

Growth In Diabetes Is Creating A “Hidden” Pandemic

About 37 million people have diabetes in the U.S., according to the Centers for Disease Control and Prevention (CDC). That’s over 11% of the population. 96 million US adults — or about one-third of the population — have higher-than-normal blood sugar levels, or pre-diabetes. Most of these folks will develop type-2 diabetes within five years.

Even more alarming… Diabetes is the 7th leading cause of death in the United States.

Diabetes isn’t just an illness. It is a life-threatening disease. Every seven seconds one person dies from diabetes, according to the International Diabetes Federation. It’s the primary cause of kidney failure and can also cause blindness, stroke, heart attack, amputations… the list goes on.

Soon, worldwide spending on diabetes-related treatments will cross over $1 trillion. And it’s only expected to rise…

The point is that diabetes is spiraling out of control and showing no signs of slowing down.

It’s a hidden epidemic that doesn’t get talked about enough. That’s the bad news.

The good news is that the global drug and device market for diabetes has also seen rapid growth. And companies supplying the diabetes market are continuing to innovate, providing new treatments as this unfortunate trend continues to accelerate.

How We Can Invest

The last time I discussed the hidden epidemic of diabetes, I mentioned Novo Nordisk (NYSE: NVO). The Denmark-based pharma giant is the global leader in the insulin market (among others).

When I mentioned NVO back in late March of 2020, practically everything had sold off drastically. I said that NVO would be a compelling “buy” once the dust settled from the Covid-19 selloff, and that’s exactly what happened.

The stock was trading for around $50 back then, and today’s it’s changing hands for about $120. 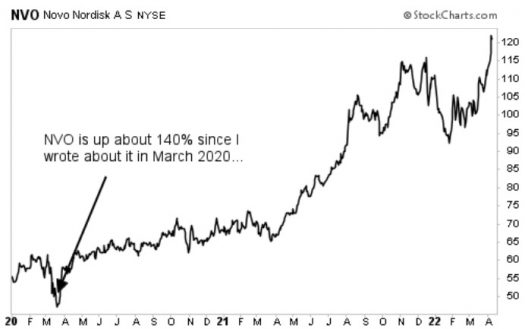 I still think NVO will probably make money for investors over the long term. But the $275 billion market cap company carries a pretty high valuation at this level (35 times expected earnings). So the ship has probably sailed in terms of large, rapid gains over the next couple of years.

Instead, the real growth opportunity for investors lies in the innovation of continuous glucose monitoring devices and insulin delivery devices.

Long gone are the days of pricking yourself every few hours to check your levels – and so are the days of having to administer painful insulin shots. Instead, there are several “smart” devices and apps to make life more manageable. They also deliver a wealth of information, instantly.

I recently told my Capital Wealth Letter subscribers about two smaller companies I like in this space. Unfortunately, I can’t share their names with you out of fairness to my premium readers. But you can go here to learn how to gain access to these picks and view my latest research.