Back home, our local meteorologists are always friendly, charismatic, and routinely show up for charity fundraisers.

They just aren’t too great at predicting the weather. I can’t tell you the number of times they’ve warned of monsoon storms that turned out to be false alarms. Or worse, planned outings ruined by unexpected rain that was nowhere in the forecast.

Understandably, there is some guesswork involved — this is an inexact science. And they are still probably more accurate than economists have been lately with inflation. Investment research firm Bespoke recently took note of an inauspicious pattern. Economists had underestimated the Consumer Price Index reading in 21 out of the past 23 months.

Inflation, The Fed, And Recession…

Those polled were anticipating inflation to rise 8.3% year-over-year in May. The actual headline number came in at 8.6%, the sharpest increase since 1981. Once again, the experts missed to the downside. After two years of incontrovertible data, many economists still fail to fully appreciate the true depth of the problem.

At least we don’t hear the term “transitory” anymore. There’s near-unanimous agreement that inflationary pressures have become a clear and present danger. Still, some of the more dovish had been insisting that the numbers are cooling, or at least leveling off. They aren’t. In fact, this latest report shows core inflation accelerating.

Believe me, traders took notice. Before May’s CPI release, Fed Funds futures were pricing in a mere 3% chance of a 75 basis point rate hike at the upcoming meeting. Afterwards, the odds quickly shot up to 40%. And then 90%. Meanwhile, the chance of a milder 50 basis point increase fell to 10%.

You can’t help but notice those two numbers equal 100%. As in, there are no other plausible outcomes. A zero percent probability of anything less than a half-point rate increase. After all, the hotter inflation runs, the more aggressively the Fed must intervene. And that intervention will slam the brakes on an economy that is already teetering on the edge of recession.

Hence the severe backlash in the equities markets that officially drove the S&P 500 into bear market territory.

Remember, the Fed has a dual mandate and is tasked with stabilizing prices and maximizing employment. The former is top priority right now. So when the final decision was officially handed down by the FOMC, it came as little surprise.

Rates are indeed headed higher by 0.75%.

How drastic is this response? Well, the last time it happened was November 1994 and Alan Greenspan was calling the shots. And we aren’t done yet. More tightening is needed to properly corral inflation. This cycle is far from over. The odds favor another half or three-quarter point uptick at the next meeting.

That explains why the two-year Treasury note, which is fairly sensitive to Fed policy, recently rose to 3.34% — the highest level since 2007. The 10-year Treasury yield (which directly influences mortgage rates and other consumer loans) rose to an 11-year peak of 3.39%.

Side note: You can’t help but notice the narrow gap between those two as the yield curve has flattened. It actually inverted (with the shorter-term note paying more than the longer-term) earlier this year, often a harbinger of a looming recession. 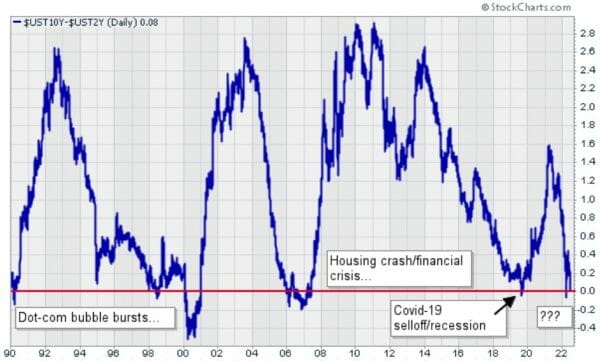 As you can see from the chart below, the 10-Year Treasury has surged by nearly two hundred basis points over the past year. That’s an explosive move for this normally placid instrument. 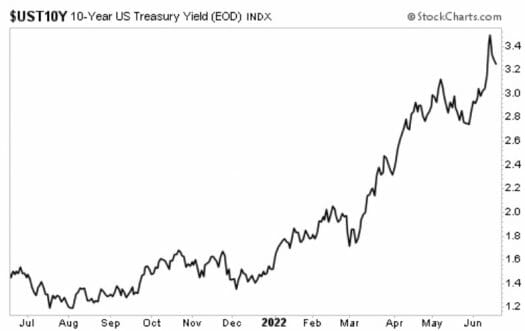 How You Can Respond

This brings us to rule number one of income investing: prices move inversely to yields. So if yields are climbing, then prices are sinking.

This is a tough environment across the asset class spectrum, from municipals to convertibles to preferreds. It’s no accident we are underweight in these areas over at High-Yield Investing, my premium service.

You could turn to equities. In fact, I said in a recent article that the market was in the process of giving us an opportunity to lock in some high yields. But of course, no one can accurately predict when the declines will end.

Fortunately, there is a solution – a rare breed of security that doesn’t just provide shelter against rate tightening but actually thrives on it.

I mentioned this asset class a few weeks ago, saying that they could buoy your portfolio over the next 12 to 18 months. (You may have also heard of these under a different name — senior loans, prime rate loans, syndicated loans, or floating-rate loans.)

In fact, in the latest issue of High-Yield Investing, I took a deeper dive and recommended a favorite. It currently yields 7% — and those payments should rise along with interest rates.

For now, I’d advise you to check out my previous article here. But I plan on sharing some more about bank loan funds in a future piece – because I think it could be your best bet to win the fight against the Fed in the coming months.

In the meantime, if you’re looking for the absolute best high yields this market has to offer, then you should check out my latest research…

You’ll learn about 5 “Bulletproof Buys” that have weathered every dip and crash over the last 20 years and STILL hand out massive gains to investors. You’ll also learn more about High-Yield Investing and how to get full access to my premium portfolio.