Time To Get Bullish Again? Here’s What You Need To Understand…

It is hard to believe that I’ve been at this for nearly a decade. It seems like yesterday that I was just a young whippersnapper eager to put my stamp on my first premium newsletter.

Longtime readers will know that I came from the more “traditional” side of finance. I quote traditional because, to be frank, “technical analysis” was always seen as some sort of witchcraft. In school and at the big banks it was all about discounted cash flow models and valuation metrics… not drawing lines on charts or looking for a “head and shoulders” pattern.

But over time, we’ve even seen the big boys at large financial institutions go from mocking technical analysis to embracing it, and more specifically momentum investing.

When I took the helm of Maximum Profit, my first premium service, you could say I had a hefty dose of skepticism about momentum investing. But I quickly saw how impactful technical analysis (and specifically momentum investing) can be. It can be helpful not only to the bottom line in terms of trading profits, but in helping to master your emotions and remain disciplined to your strategy.

Now, I believe that every investor should have at least a basic understanding of momentum investing. Here’s why…

The Trend Is Your Friend

At its most basic form, momentum investing is simply following the trend. If stocks are in an uptrend you want to buy, if they’re not, then stay away.

As simple as this sounds, it’s difficult for most investors to grasp. After all, it’s ingrained in us to “buy low and sell high.” Buying something that’s trending up feels like we’ve already missed the boat. But that couldn’t be further from the truth.

If you want to know whether you should buy or sell stocks today, you only need to understand one thing…

There’s nothing more important than the trend.

To see this powerful concept at work, just take a look at the chart below… 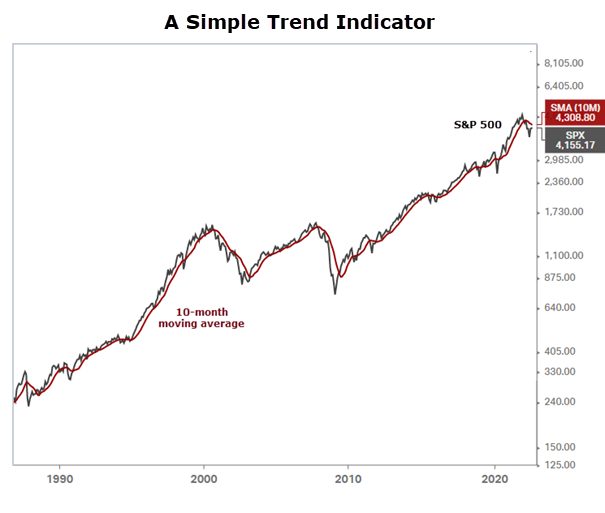 That’s a monthly chart of the S&P 500 since 1987. The red line is the 10-month moving average. That’s just the average closing price for each of the last 10 months on a rolling basis. It’s a typical way to measure the long-term trend.

It doesn’t take a rocket scientist to interpret what’s happening here. When the market is above the line, you want to own stocks. When it’s below the line, you don’t.

Common trend indicators like this one can be extremely beneficial to the everyday investor. Even those who look down on any sort of technical analysis should be able to see the value here. If anything, it can help investors avoid major drawdowns in their portfolio… assuming they follow it.

I do want to point out that trend indicators like the one above in general are not “return enhancing”. They are mainly used to reduce risk, or equity exposure, during bear markets. If you want return enhancing, that’s where relative strength or momentum approaches work great.

What About Today’s Market?

The chart above tells us that we should avoid stocks. And while that’s good advice for the everyday investor, that doesn’t mean that I (or my premium subscribers) have sold everything and avoided the market altogether. But we have been very selective in this bear market.

A couple of weeks ago, I wrote about one of my favorite technical indicators (the Coppock Curve). This is something I’ve mentioned many times over the years — it’s a momentum indicator that measures the market’s “emotional state”. This is an indicator that has consistently identified market bottoms. Once the Coppock Curve drops to “0”, the next upward reversal almost always signals a buying opportunity and the start of an uptrend.

You can go back and read more about this indicator, but the point is that the Coppock Curve was giving us early signs that the bear market may be coming to an end. And since then, the S&P 500 has ripped off a nice 6%-plus gain.

I don’t bring this up to take a victory lap… in fact, I think we could still see the market fall from here. And that’s because the broader trend is still down (again, see chart above).

So while the Coppock Curve indicator is giving us a buy signal, and we will continue to wade back into the market… I also know that stocks tend to stage furious short-term rallies during bear markets. Just look at the bear market rallies we saw during the dot-com bust… 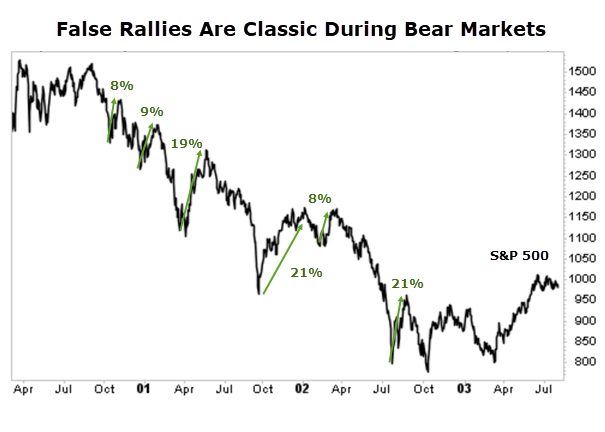 This happened again during the downward spiral of the financial crisis. Stocks had five bear market rallies. The last of them led to a quick 24% gain… 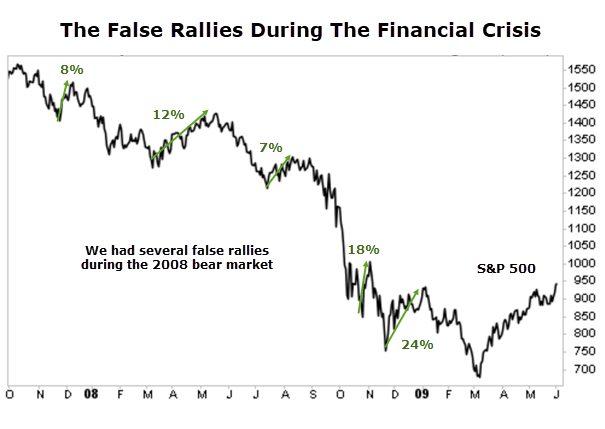 This is a classic occurrence during a bear market. We see swift rallies that give investors hope, then they stall out as fast as they began. Then, the market plunges to new lows.

We’ve already seen two false rallies during this current bear market. The only question is whether this is a third one, or if the market truly has bottomed. My guess is the former… 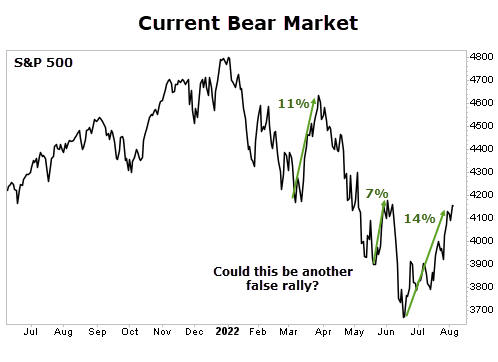 We’re starting to see some encouraging signs in this market, but don’t be fooled. We’re still in a bear market, and that means we should invest with caution. If you’ve paid heed to my advice about stop-losses (and why they can be your best friend), then now is not the time to remove them.

It’s also okay to be conservative with your gains during these times. This is why I like to have a profit targets in mind beforehand, so that I don’t get greedy later on. When I first advocated for profit targets in April 2020, I did so because I knew it would help during times like these. I specifically said back then, “the real purpose of the profit targets is to help capture more gains during volatile markets.”

So, as we wade back into this market we have to stay vigilant. This is an especially tough environment to trade — and you may end up getting kicked out of some trades. If that’s too much for you to stomach, then it’s okay to step aside and wait until the broader trend is back in our favor.

Editor’s Note: Investors across America have been patiently waiting for Starlink-Elon Musk’s satellite internet company to IPO. However, he’s just revealed in a tweet that we won’t see a Starlink IPO for YEARS.

Disappointing, right? But after months of research, I’ve discovered a “backdoor investment” that could get you in on the ground floor of Starlink TODAY… and lock in a chance for life-changing gains.