I golfed for the first time in years the other day.

As you may have guessed from my long sabbatical, I’m not an avid golfer. But I still have the first clubs I purchased in 2005 off eBay.

It’s a fun yet very frustrating game. Ironically, it doesn’t matter how many times you slice your ball, hit it out of bounds, or into some hazard that has you pounding the club face on the ground. One good connection with the ball keeps you coming back. One good hit, and that pent-up frustration, and all those terrible shots, fade away.

The parallels between golfing and trading stocks are uncanny. Just like one good golf hit is a total redeemer, one good trade is all it takes to keep you coming back wanting more. Even if most of the time you are pulling your hair out, stressing, or losing sleep over your positions.

The market only cares about two things: money coming in and money going out. That’s it.

It’s our job to decipher what the market is doing and how we should navigate it.

Should we pull out the driver and swing for the green (invest big)? Or is it better to lay up (remain more conservative)?

That’s what I want to talk about today…

Getting A Read On Today’s Market

Somedays, it’s much easier to read the markets. You can pull profits nearly at will. Other times the market is much tougher to read — and that’s where we find ourselves today.

For example, investors are sitting on the edge of their seats, trying to figure out if this current rally is the start of a new bull trend or just a bear market rally (which I discussed here).

In article, I offered advice on identifying the broader market trend using the 10-month moving average. Today, I want to talk about a much more common moving average that you’ll likely be hearing a lot about in the coming days. And that’s the 200-day moving average.

I bring this up now because it is a psychological threshold that a ton of investors (and trading algos) watch.

The 200-day moving average is widely tracked, which makes it a natural resistance level and a battleground area for bulls and bears. The S&P 500’s eager rally is rapidly approaching this “line in the sand.” 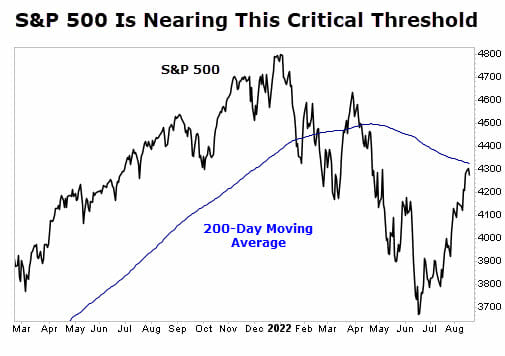 A close above the 200-day moving average would be viewed as a change in the market’s long-term trend. But it’s a line that isn’t easy for the market to cross.

For instance, let’s take a look back at November 2000. This was the beginning of the dot-com meltdown, and the S&P 500 failed to breach its 200-day moving average before the real downside started. And as you can see in the chart below, the market even made two small pushes above the trend line but failed to hold. 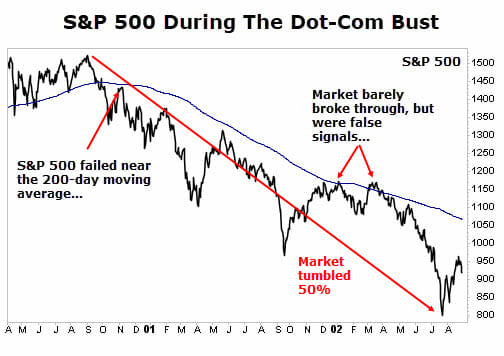 The same thing happened in May 2008. The S&P 500 failed at the 200-day moving average before continuing its descent to a market bottom in March 2009. 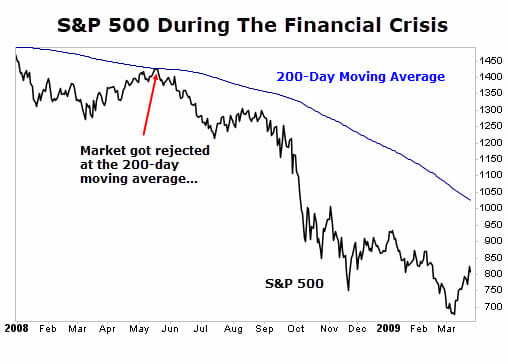 So, don’t be surprised if the market stalls out at this critical resistance level. We could see a quick and sharp pullback in the broader market if it does.

What Volume Is Telling Us…

Our first significant support level will be right around 4,150. If it falls below that, then the next level of support comes in at 3,900.

To get these levels, I looked at volume profiles (the horizontal bars in the chart below). These bars show trading volumes at various price points. The longer the bar, the more active buyers and sellers are.

Knowing this can help identify basic support and resistance levels. The longer the bar, the more action takes place, which means you can typically expect those levels to hold. The shorter the bar, the less volume there is. You’ll see prices move quickly through those levels since fewer buyers and sellers are willing to make a deal.

Below is the weekly chart of the S&P 500 over the last few months. Take a close look, and you’ll be able to quickly see where most trades are taking place (the two longest bars). You can actually see the weekly candles bounce between these two levels throughout much of May. 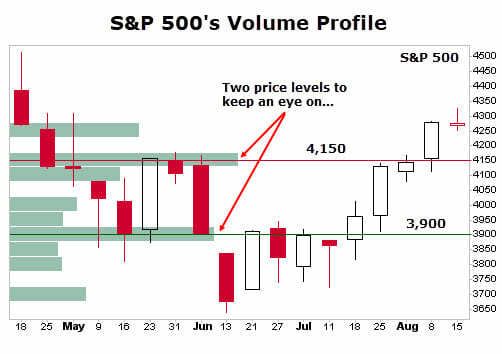 The horizontal lines (red and green) represent the midpoint of that action, typically called the point of control, or “POC.” The red line lands at 4,150, while the green line lands at 3,900. We know that these two areas are critical in terms of support and resistance.

If we do see a rejection of that 200-day moving average, we will have an idea of what the market might do and the make-or-break levels for the S&P 500.

Obviously, if we get a pullback in the broader market, we will want bulls to defend that 4,150 level to keep this rally alive.

Of course, these levels could mean nothing if the market has truly bottomed and breaks through that 200-day moving average. And because we don’t know what the future holds I would recommend keeping plenty of dry powder on hand. There will be plenty of opportunities to find market leaders and make profitable trades.

Editor’s Note: Investors across America have been patiently waiting for Starlink-Elon Musk’s satellite internet company to IPO. However, he’s just revealed in a tweet that we won’t see a Starlink IPO for YEARS.

Disappointing, right? But after months of research, I’ve discovered a “backdoor investment” that could get you in on the ground floor of Starlink TODAY… and lock in a chance for life-changing gains.