Is The Bear Market Over? My “Line In The Sand” Indicator Says Not So Fast…

The market reached the “line in the sand” I mentioned last week. And it quickly retreated…

Last week, I talked about the S&P 500 creeping up on the widely tracked 200-day moving average. I noted that it would be a key battleground area. I said if the market cruises past it, it would be viewed as a win for the bulls.

I also said that should the S&P 500 get rejected at the 200-day moving average, a key area of support would be 4,150, and we would likely see a lot of action surrounding this level. 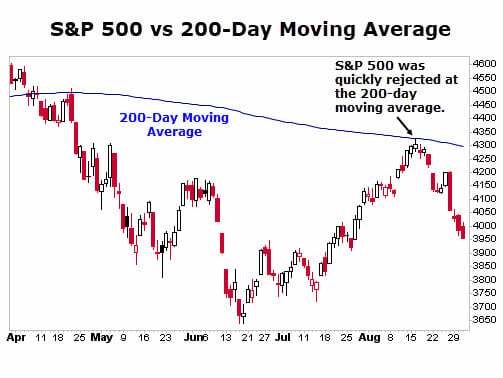 As the market sunk lower, it approached our first area of support (4,150). And just as we anticipated, this was a key battleground area that we identified in the last issue using volume profiles.

The chart below shows that the trading volume (green horizontal bar and first level of support) is dramatically larger than any of the other bars. 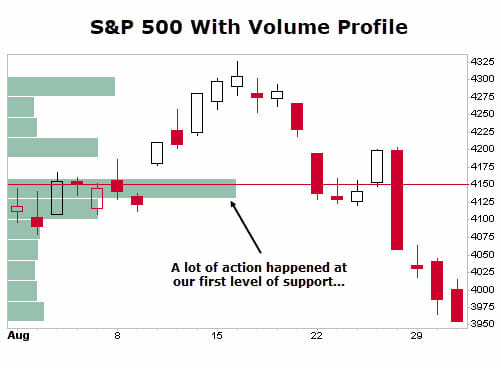 After a few days of the S&P 500 trading around this key level, the bears once again prevailed, sending the market lower.

Our next area of support (which I pointed out in my last issue) is 3,900 — the green line in the chart below: 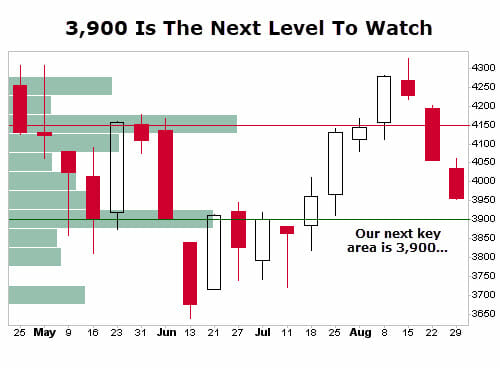 When the market reaches this critical area, expect another battle between buyers and sellers. We could see the market trade around this level for a few days before it decides what it will do next.

The Elephant In The Room Nobody Is Talking About…

So what’s behind all this? What’s really driving the market?

The quick and dirty answer is the Federal Reserve.

U.S. stock indexes were enjoying a nice 20% rally since mid-June. Many investors were betting on a “Fed pivot” — a move where the central bank would pull back on interest-rate hikes sooner rather than later because inflation was showing signs of easing.

But last Friday in Jackson Hole, Wyoming, Fed Chairman Jerome Powell squashed any hopes of a Fed pivot. He all but conceded in concluding that there could be a recession on the horizon, as he talked about the Fed’s plans to keep raising interest rates to battle inflation.

His specific words were:

His hawkish stance startled markets, sending them lower by more than 3% on the day. And they’ve continued to slide since then.

But here’s the thing… While most of the talk and headlines will be around interest rates, and how high the Fed will hike them, the real story that isn’t getting enough attention is the Fed’s balance sheet.

I shared my concerns over this particular subject before. I’ve been concerned about the winding down of the Fed’s massive money printing “experiment,” also known as quantitative easing (“QE”), and its negative impact on markets.

Of course, at the conference in Jackson Hole, Powell didn’t talk about the Fed’s balance sheet.

The Fed started trimming its balance sheet in the spring. But has done so very gingerly. In fact, it has only reduced its total assets by about $100 billion, or 1%. But starting in September, the central bank will trim as much as $95 billion per month from its holdings. That’s a major headwind for markets.

In the simplest terms, you can think of it like this… during QE (when the government is printing money), stocks generally rise, and with quantitative tightening, or “QT,” stocks generally fall.

Remember, if the market falls below 3,900, you can expect it to quickly retest its June lows. And if it dips below its previous lows… well look out below.

Bear markets — especially bear market rallies — make it extremely difficult to trade. That doesn’t mean you can’t invest or trade in this environment, but it’s important to remember that you don’t want to fight the trend. And the broader market trend continues to be down.

There are all sorts of landmines facing markets as the Fed continues jacking up interest rates while reducing its balance sheet. We’ve had two straight quarters of GDP declines — suggesting the U.S. has technically entered a recession.

The second largest economy, China, is in its deepest downturn in many years, as its own real estate bubble collapses. Europe is a basket case, with soaring electricity costs and fuel shortages wreaking havoc across industries.

And finally, history suggests that September and October are very difficult months for stocks. During the dot-com bubble in 2000-2002, September was brutal in all three years.

It wasn’t any different in the 2008-2009 bear market, which saw another September into October plunge.

In the coming days (post Labor Day weekend), Wall Streeters and other investors will return from their summer vacations and realize that the two-month bear market rally has ended. The Fed isn’t going to step in and save the markets, and many of their portfolios will be hurting, which will only exacerbate the selloff as they unload positions to soften what will surely be more downside.

I realize that I’ve painted a grim picture for the markets. And I could absolutely be wrong. But really the only thing I see saving the markets would be inflation slowing down faster than expected — July’s CPI was 8.5%, while the Fed’s preferred inflation gauge (personal consumption expenditures, or “PCE”) checked in at 6.3%. The Fed’s target inflation is around 2%.

If inflation miraculously slows down faster than anticipated, the Fed could soften its hawkish stance, which in turn would likely be a boost to markets. But that’s a lot of “ifs.” One that I’m not willing to gamble our hard-earned money on. That’s why I’m largely staying on the sidelines and not making any big moves these days.

Remember, don’t be afraid to take some small profits off the table here and there. Have plenty of cash on hand right now (even with high inflation). Because when the market trend turns bullish, you want to be able to pile into stocks and make a bundle of money.