One Of My Favorite Energy Stocks Just Got A $9.75 Billion Windfall…

As one of the world’s largest energy producers, ConocoPhillips (NYSE: COP) has assets around the globe… from Alaska’s famed Prudhoe Bay to the Ekofisk region of Norway to Morocco’s Gharb-Rif basin.

Most of these projects are located in hospitable countries with stable and predictable regulatory agencies. But not all of them. On occasion, exploration companies (in both the mining and oil industries) will risk setting up shop in dangerous territory to pursue their next bonanza. It’s not uncommon for government regimes in these nations to suddenly raise royalties and taxes without warning to fill their coffers – or even to seize desirable assets altogether.

That’s what happened to ConocoPhillips in Venezuela. The incident dates back to 2007 when socialist President Hugo Chavez took control of numerous oil, electricity, and steel-producing assets in a wave of nationalization. Three of Conoco’s oil-drilling projects were expropriated.

The dispute was unresolved for over a decade until a World Bank tribunal ruled in Conoco’s favor in 2019, awarding the company $8.75 billion in damages from the unlawful seizure. That’s less than the $30 billion it was seeking, but some compensation is better than none.

So why dredge up this story now? Because with most matters of international law, the issue is rarely settled until all avenues of appeal have been exhausted. In this case, the matter has been in the hands of a U.S. Federal court, which just recently rendered a final verdict (an easy one, considering Venezuelan attorneys didn’t show up).

Judge Carl Nichols has ruled that ConocoPhillips is fully entitled to collect the $8.75 billion arbitration award — plus $1 billion in accrued interest.

It’s All About The Permian (And The Dividend)

These days, for ConocoPhillips, it’s pretty much all about the Permian Basin. The company aggressively moved into the Permian over a few years, acquiring more than a quarter-million acres in the fertile West Texas basin. This strategy was headlined by the accretive acquisition of Concho Resources and its prime territory in the region.

The company has ramped up its average daily production to 1.7 million barrels, with most of that output coming from West Texas. Multiply that by the average realized sales price of $88.57 per barrel (an increase of almost 80% over the past year), and you can understand the three-fold surge in the bottom line.

So this court decision was hardly make-or-break litigation. Still, even for Conoco, $9.75 billion is a fairly big win. And it gives the board even more cash to fulfill its commitment to share the company’s wealth with stockholders.

As I explained back in February, management aims to return 30% of cash flows. The remainder will come in the form of a variable dividend component, complemented by share repurchases.

Last year, COP laid out an ambitious 10-year outlook and agenda. As part of those plans, it expects to return $65 billion to shareholders by 2031 — entirely with internally generated cash. Free cash flows are expected to total $70 billion over the period (based on $50 WTI oil – well below current levels).

Management has just authorized a sharp $5 billion increase in this year’s return of capital plan (from $10 billion to $15 billion). The regular quarterly dividend of $0.48 only eats up a fraction of that, so it is being supplemented with quarterly variable returns of cash (VROC) tied to profits. The next installment will be $1.40 per share. 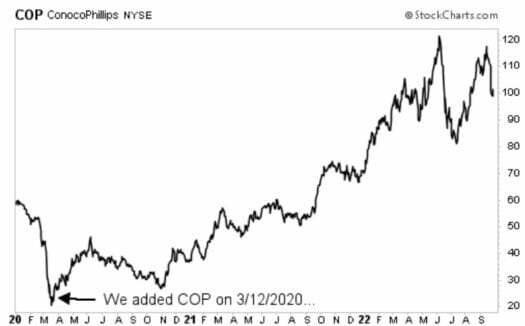 I initially recommended COP to my premium subscribers a little over two years ago during the pandemic. Shares were trading in the mid-twenties and have ridden the sharp rebound in crude prices to as high as $112. All told, we’re up roughly 300%.

Since then, I’ve written about COP several times — citing it as an ideal pick for growth and income investors alike. And while the gains may not be as fast and furious going forward, I think COP has the discipline to remain quite profitable with oil prices at current levels.

Editor’s Note: How would you like to get paid every month from your portfolio? It’s easier than you think…

I make it my business to research the best income payers the market has to offer. And in my experience, nine out of 10 investors don’t even know that there are dozens of high-yielding monthly dividend payers out there. …

In my latest report, I reveal 12 of my favorite monthly dividend payers that you should consider buying. You could start receiving payouts of $210… $236… $250… and more every single month! Go here to learn more now…