I was reminded of the role oil played in World War II on my recent trip to Charleston, South Carolina.

On June 10, 1943, a tanker owned by Standard Oil — the oil monopoly founded by John D. Rockefeller — was roughly 100 miles southeast of Savannah, Georgia.

Unbeknownst to the oil tanker — the Esso Gettysburg — a German U-boat snuck up on them like a shark in the water. The U-boat fired two torpedoes at the tanker. The first torpedo struck the port side, ripped up 25 feet of deck, blew oil 100 feet into the air, and disabled the steering gear. Seconds later, the second torpedo struck on the port side near the engine room, immediately causing a fire.

Oil from the tanker spread out into the water and caught fire. Flames spread 100 feet on both sides, and smoke rose over 1,000 feet into the air.

15 sailors were bobbing in the water while the tanker sank… with only three life jackets to save them. After swimming for three hours, the survivors found a lifeboat. They were only alive because before they jumped ship, the U.S. Navy officer assigned to the Gettysburg — John Arnold — fired at the Nazi sub that sank them. That heroic effort kept the U-boat from surfacing to finish them off.

The remaining crew was saved the next day, and they arrived safely in Charleston, South Carolina. Ensign John Arnold survived and earned the Navy Cross for his valor.

American Innovation To The Rescue

The German attack on Esso Gettysburg was not an isolated incident. At the time — in June 1943 — the Atlantic coast was a death trap for tankers and merchant vessels making their way from Texas to New York ports, where their oil payloads could be exported.

The United States supplied about 60% of the world’s oil then. The Nazis knew it was a vital resource for the Allies. In December 1941, Hitler sent five U-boats to patrol the U.S coast and cut off as much supply as they could. In just the first three months of 1942, Germans sank 46 American tanker ships and damaged 16 more.

The attacks devastated the U.S. industry. Oil shipments out of the Gulf of Mexico collapsed from 1.4 million barrels a day in the spring of 1941 to 100,000 barrels a day by January 1943.

The Nazis had effectively cut the world off from U.S. oil. The war itself was in jeopardy.

The United States needed to figure something out. And quickly. So, we built an oil pipeline across the country in 350 days.

These pipelines were known as “Big inch” and “Little Big inch.”

“Big inch” was a 24-inch-wide pipeline that took oil about 1,200 miles from Texas to refineries in Illinois and Pennsylvania. From there, the 20-inch-wide “Little Big inch” took fuel another roughly 1,500 miles to New Jersey, where it served New York. Another branch served Philadelphia and terminated at Chester Junction, Pennsylvania.

The pipelines were financed and owned by the government, but they were built and operated by a consortium of the largest American oil companies. The massive project required 16,000 people and 658,000 tons of material. 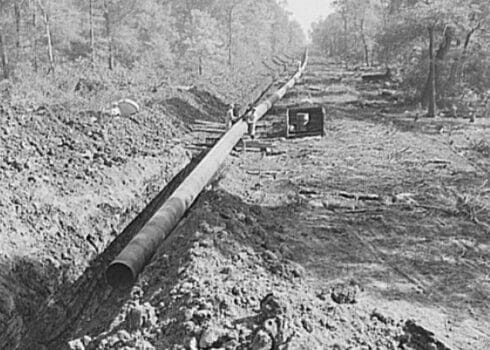 The pipelines played a significant part in the war. They allowed us to get fuel to American and Allied soldiers fighting in Europe. We also built “Victory ships” — a new class of ocean-going tankers that could be surrounded by destroyers to protect their voyage across the Atlantic. By 1944, oil and other supplies were reaching Allied forces in Europe.

Innovation of pipelines and tankers helped solve a global energy crisis. America was the world’s dominant producer of oil… a resource Europe desperately needed to stave off the spread of fascism.

Can American Energy Save The World Again?

The U.S. is once again a global leader in petroleum products. While we’re not engaged in a conventional war… Europe is once again in dire need of oil and gas. And while we aren’t fending off U-boats, an attack on key pipelines in the Baltic Sea has disrupted the gas supply from Russia to Europe.

As I explained in this article, this not only supports the case for elevated energy prices, but it also puts American energy firms in a prime position to profit. That’s because when it comes to oil and natural gas, the U.S. now reigns supreme. It surpassed Russia and Saudi Arabia in crude oil production in 2018.

The headquarters for America’s oil production is Texas. It yanks nearly four times more oil out of the ground than the next-closest state. Last year, Texas produced around 43% of all U.S. oil.

In fact, the Lone Star State produced more oil last year than every country in the world except Russia, Saudi Arabia, and Iraq. Its crown jewel — the Permian Basin — lies in western Texas. It covers 75,000 square miles and produces more than 5 million barrels of oil daily.

The Permian Basin is the top-producing oilfield in the world, surpassing the famed Ghawar field in Saudi Arabia. The Permian comprises two sub-basins: the Midland Basin, which is entirely in Texas, and the Delaware Basin, which is further west and creeps into New Mexico. 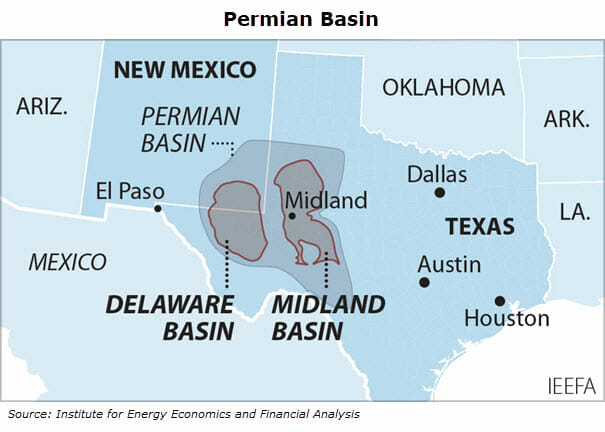 Not only is the Permian Basin the largest in the world, but it’s also one of the cheapest in terms of production cost. So if the world needs energy from a reliable country, it’s going to need the U.S. — and the Permian Basin in particular.

One Idea To Profit…

That’s why I recently introduced my Capital Wealth Letter subscribers to one of the best, most profitable U.S. oil and gas companies operating in that region. I won’t reveal the name of that pick out of fairness to my premium readers, but I can offer another name that’s worth looking into: PBF Energy (NYSE: PBF), an oil and gas refiner.

PBF owns and operates six domestic oil refineries with a combined processing capacity (known as throughput) of roughly 1 million barrels per day. Its refineries are in California, Louisiana, Delaware, New Jersey, and Ohio.

PBF is one of the largest unbranded oil refineries in the United States. As you can imagine, oil refineries are in high demand right now. And as we learned in Econ 101, strong demand is great for profits.

Last year, PBF produced a record $27.3 billion in revenue, which was an 80% increase over 2020. This year is going to be even better. The company is on track to generate approximately $43 billion.

Finally, getting to my favorite line item — cash from operations — PBF is expected to produce over $3.8 billion in cash flow. That would represent a 705% growth over 2021.

The financials are simply astonishing. Even crazier, one might think this stock would be trading at lofty valuations. But that’s not the case…

On an EV/EBITDA basis, the stock trades at just 1.8, which is well below its five-year historical average of 7.7. Every single valuation metric you look at, the story is the same. It’s trading for dirt-cheap.

PBF is a solid pick that’s worth consideration. But my colleague Nathan Slaughter may have found a pick with even more upside…

Located on the West Texas prairie, one tiny company is sitting on the largest oil reserve in history… with enough “black gold” to independently power America for the next 49 years…

You won’t see this covered on the nightly news… But some heavy hitters are making big investments in this area — and this little-known company stands to profit the most. Go here for details now.