Finally, A Good Month For Gold — Here’s What Could Happen Next…

Coming into 2022, I was concerned that this year would be a tough year for stocks.

Between inflation, raising rates, and quantitative tightening, I just didn’t see how the market could continue its historic performance. (You can go back and read my comments from January here.)

Of course, gold has always been seen as a “safe haven” and as a store of wealth. And gold typically does well during times of market upheaval. This is especially true when the government is inflating its money supply to pay for things like wars, bailouts, social programs, and anything and everything else.

So to prepare for the storm, I recommended a timeless yellow metal miner over at my premium service, Capital Wealth Letter. We followed that up by making another gold pick in May.

Oddly enough, my bear market prediction turned out to be correct, but my gold mining picks haven’t quite performed as I expected. We are only up about 6% on the gold pick I recommended in January, which is better than the S&P 500’s -15.5% loss. The other gold pick we made in May has done better, however. It’s up about 30% (the S&P lost about 5% during that time).

This uneven performance has been mainly due to an extraordinarily strong dollar. On that front, we may be finally turning the corner. And seeing as how many of the previous arguments I’ve made for a gold rally are still in place, this means we could see a strong rally in the gold market in the coming months.

The Dollar (Finally) Breaks Down

This is great news for gold miners, especially since we are heading into the strongest seasonal months for gold (over the past two decades, the December through February period has provided almost two-thirds of all gold’s gains). 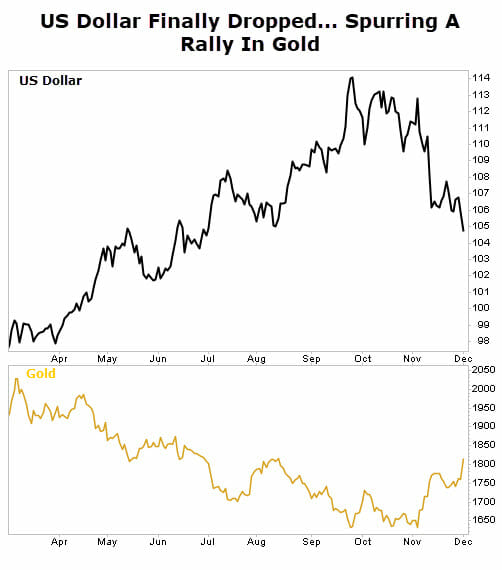 The gold rally translated nicely into our two gold mining stocks — both experienced significant rallies. In fact, one jumped over 30% in November alone.

This is usually the part where most analysts would cite the major runup in gold prices during the “stagflation” period of the 1970s. They would point to rising inflation, geopolitical risks (the war in Ukraine, a provocative China), and the Federal Reserve hiking interest rates — which many assume will send the U.S. economy into a recession.

All of the ingredients are there. But the truth is, gold’s epic run back then was a once-in-a-lifetime deal. And we can’t expect history to repeat itself exactly. But the good news is, it doesn’t have to. As I’ve pointed out before, there have been previous periods of rising rates where gold prices have mounted a strong run.

And remember, the gold miners should outrun the price of gold in a bullish gold market.

It’s All About AISC

Both of the picks we hold in Capital Wealth Letter are among the best miners in the world. They own some of the most lucrative mines in the world, with high-grade gold deposits that don’t cost much to pull out of the ground.

For example, in its third-quarter press release, one pick announced that its all-in-sustaining costs (“AISC”) per ounce of gold was $1,106. AISC is the total cost for a mining company to produce one ounce of gold. Our other pick is in a similar position. Its AISC in the third quarter was $1,178 per ounce.

Obviously, the bigger the spread between the AISC and gold prices, the more profit the mine generates.

Now, I’m not going to give away the names of these picks out of fairness to my premium readers. I will, however, offer some suggestions in just a moment. But for those interested, I want to equip you with the tools you need to research picks in this space on your own.

And to do that, we need to talk about AISC a little more. Here’s what I’ve written about this all-important metric in the past:

The first thing you need to understand about gold miners is that they are a slightly different animal. Unlike most of the traditional companies in a portfolio, they can’t determine what they sell their product (gold) for. They’re at the mercy of the spot price of gold.

On top of that, it’s not cheap to mine for anything. You have to build the facilities, usually located in remote areas, then purchase equipment, secure permits… all of which can quickly add up. And this is all before they can mine a single ounce of gold, which they sell to cover costs and hopefully have some leftover.

And let’s not forget that after all this, what they are producing will eventually run out, so they need to continue finding and developing other gold or precious metal deposits.

But if we keep things simple, we can easily understand what makes a good mining company. They need to get the gold out of the ground for cheaper than what they sell it for.

Fortunately, we don’t have to do much work to figure this out, as the mining companies do all the calculations for us. They boil it down to a key metric called “AISC,” or “all-in sustaining costs.” This tells us exactly what it costs for a mining company to produce one ounce of gold.

Obviously, the production costs need to be less than the price of gold. The wider the discrepancy between AISC and gold prices the more profitable the company is.

I still think gold should do well as we head into 2023 and will look for other mining opportunities over at Capital Wealth Letter.

For those looking to profit, consider the VanEck Gold Miners ETF (NYSE: GDX) if you want to own a broad basket of gold miners. Alternatively, you could look into larger gold miners like Newmont Mining (NYSE: NEM) and Barrick Gold (NYSE: GOLD).

But if you’re willing to take on a bit more risk for more considerable upside, shares of smaller mining companies can easily double, triple, or quadruple as nervous investors rush to gold.

That’s why we picked two smaller players over at Capital Wealth Letter. At worst, we gain some diversification and a portfolio hedge. And if I’m right about gold (and gold prices), the sky is the limit.

P.S. Everyone wants to know who will take the top spot in the new “billionaire space race”. We think Elon Musk is in the lead right now, thanks to his latest brainchild: Starlink…