We’re Headed For A Major Copper Shortfall. Here’s How You Can Profit…

Around this time a year ago, I wrote that we were in the beginning stages of a new commodity “super cycle” — and that my High-Yield Investing readers and I were preparing to profit.

The reasons for this new wave of rising prices were complex. But one of them undoubtedly was the “green wave” — that is, the push for more “climate friendly” power sources.

Here’s what I said about supercycles back then:

Commodity cycles tend to be long-lived. That’s because the rich, low-hanging mineral fruit has already been plucked, forcing miners to settle for smaller deposits or lower-grade ores. Couple that with the fact that producers cut back on their exploration budgets during the lean years, and there just aren’t many large-scale new projects under development. We won’t even get into the fact that it takes years to secure the requisite permits for a new discovery to become operational.

Sure, higher prices incentivize spending to expand production. But this isn’t a spigot that can just be turned on and off overnight.

Fast-forward to today, and I see no signs of this “green wave” slowing down. In fact, just a few days ago, I wrote that the boom in electric vehicles (EVs) was just getting started — and that means we’re going to need a lot more copper.

But just as I said a year ago, this supercycle is about more than just EVs. And that’s why I promised to revisit this topic and explain just how big the need for more copper truly is — and how we can profit…

We Can’t Decarbonize Without Copper

Solar and wind power is roughly five times more copper intensive than coal and natural gas-fired plants per megawatt of generating capacity. Plus, these green power sources are intermittent. They can’t generate power when night falls or the wind dies down. There’s an acute need to store that electricity until it’s needed by homes and businesses – meaning more power grid battery installations.

Simply put, the world can’t decarbonize without copper. And again, these new uses are on top of existing applications. After all, indoor plumbing isn’t exactly going away. From old-school manufacturing to next-gen power infrastructure, copper is indispensable.

Let me reiterate: a single electric vehicle needs up to a mile of copper wiring. A new smart home consumes well over 500 pounds. It takes 2 tons to add a megawatt of wind power, and 5 tons for solar. The greener we get, the more copper we need.

Where will it come from?

Global consumption was in the neighborhood of 25 million metric tons last year. Given the factors we’ve discussed, S&P Global and other forecasters widely expect annual usage to double to 50 million tons by 2035. The question is, can suppliers keep pace? 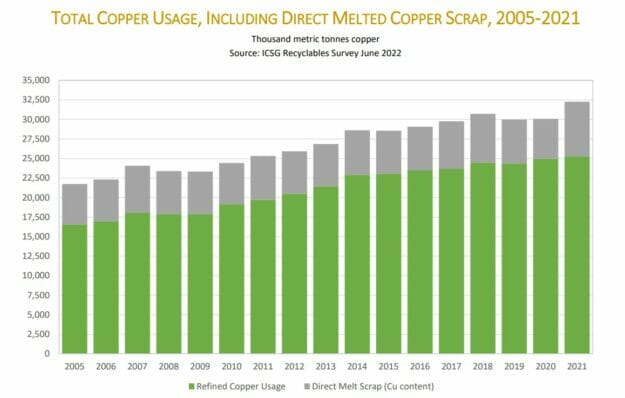 We’re Headed For A Major Shortfall

It’s not quite as simple as turning up the spigot. It’s a struggle for existing mines just to maintain their output, let alone increase it. After years of digging, the rich, low-hanging mineral fruit has been plucked and capacity has peaked. Labor shortages and disputes are another frequent impediment. Recycling activity can fill some of the gap, but not nearly enough.

The world’s most prolific copper mine, Chile’s Escondida, spit out roughly 1 million tons last year. So we’d need 25 future discoveries of similar size and scale to meet growing long-term demand. Unfortunately, with diminished exploration budgets, there have only been four major new greenfield finds since 2014 – versus 113 during the 1990s.

Years of underinvestment have left the cupboard bare. And these new sites can’t be brought online quickly. Stricter environmental regulations and political hurdles have increased average lead times. From initial discovery to commercial production, it can take 20 years to get a new site up and running.

That means today’s successful exploration won’t yield tangible output until 2043. In the meantime, the stage is set for a wide and protracted supply deficit. You might call it a chasm.

The size of the projected shortfall varies by source, but analysts generally agree that there won’t be enough copper to go around. BCA Research expects demand to have outstripped available supply by 595,000 tons in 2022. S&P Global sees a 279,000 ton gap in 2025 becoming 1.6 million tons by 2035.

That’s why you’re starting to see headlines like this:

A Great Copper Squeeze is Coming for the Global Economy
— Bloomberg

Copper: the Most Important Metal we’re Running Short of
— Kitco

A copper Shortage Could Derail the Energy Transition
— CNBC

Strict Covid lockdowns in China (which swallows about 50% of the world’s supply) have kept prices in check lately. But those measures are finally beginning to ease. And the looming supply/demand imbalance has been felt in the trading pits.

After bottoming at $4,300 per ton in 2020, copper roared back to a record high of $10,730 per ton earlier this year. That epic rally stalled out over the summer. But since then, global stockpiles have dwindled to just 200,000 tons, equivalent to a mere three-day global supply. Normally, warehouse inventories are measured in weeks.

Meanwhile, China has loosened its extreme pandemic precautions in response to coordinated protests. Traders took notice, pushing copper prices up 11% in November on the London Metals Exchange. They are currently running about $3.90 per pound, or $8,300 per metric ton. 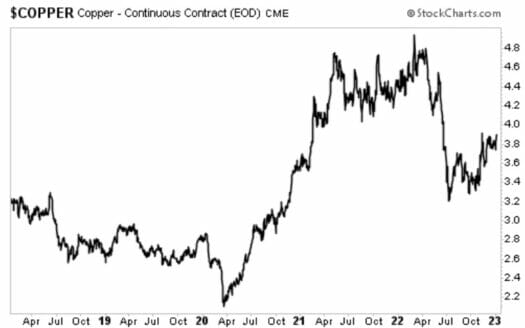 But Goldman Sachs predicts that “major restocking” in China could propel prices to $11,000 per ton over the next 12 months and $15,000 by 2025. Bank of America is even more bullish, sending a research note to clients suggesting that if sufficient scrap material can’t be recycled, a looming supply crunch could potentially drive prices to $20,000 per ton by 2025.

There’s a good chance we could be in the early stages of the next commodity super-cycle. So how can you cash in? Well, you could start hoarding physical supplies. Or speculate in the futures market.

But there’s a better way. Copper mining giants such as Southern Copper Corp. (NYSE: SCCO) and Freeport-McMoRan Inc. (NYSE: FCX) are sure to benefit, while more adventurous investors looking for even higher returns could look at the junior minors.

I plan to stay on top of this theme as it continues to develop. Stay tuned.

In the meantime, Jimmy Butts and his team just released a report of “shocking” predictions for 2023 (and beyond)…

In this presentation, you will learn about the research and analysis that went into these forecasts — and the specific investment opportunities that can help you reap exceptional profits from each one of these predictions.