My Plan To Grab An Easy 20.7% Is Already Working

Let me start by offering my deepest condolences to the family of Jennifer Riordan, who was fatally injured during last Tuesday’s in-flight engine breakup on Southwest Flight 1380. A faulty blade on one of the plane’s CFM56 turbofan engines snapped off, causing the engine to fail and sending debris flying toward a window.

Captain Tammie Jo Shults also deserves recognition for executing a perfect emergency landing and remaining calm, cool and collected under extreme circumstances. So many pilots like Captain Shults work hard to ensure our safety when we travel, and she was certainly put to the test.

Even though nearly all passengers survived the crash, the widespread media coverage is likely to have a negative impact on Southwest Airlines’ (NYSE: LUV) stock in the next quarter and further compound existing issues that have already stressed the company.

#-ad_banner-#Last week’s incident has also reminded passengers of a similar event that occurred in 2016. Only two years ago, another Southwest flight had to make an emergency landing in Florida after a fan blade from the same engine model broke off and debris tore a foot-long hole along the plane’s body. (Fortunately, no passengers on that flight suffered any major injuries.)

As a result of these events, I think we can count on a combination of results that will affect Southwest’s operations…

First, I believe Southwest passengers will start looking for flight alternatives, as most will (wrongly) believe this is a company-specific issue. (The CFM56 turbofan is one of the most widely used jet engines. In fact, it’s the sole engine used for Boeing’s new generation of 737s. You’ll find them at most major airliners.)

Second, the company will have to spend lots of extra money inspecting the CFM56 engines that are used on many of its planes.

Southwest CEO Gary Kelly has already acknowledged that the company will conduct “enhanced inspections” of the engines — and as I am writing this, the FAA has just ordered mandated inspections of the blades. But what makes these inspections difficult is that the issue they’re trying to catch — metal “fatigue” — is hard to reveal with standard tests. It’s often not detectable by a visual inspection, and even the most advanced technology can have trouble detecting it.

If Southwest and other carriers truly want to prevent another incident, they will have to use special processes to look long and hard at existing aircraft — all of which will cost time and money. (And knowing aviation well, I believe it’s likely that these inspections will result in additional, unrelated repairs needing to be performed on more aircraft.)

Following the accident, Southwest has said that it is accelerating an inspection of all CFM56 engines in its fleet “out of an abundance of caution,” and that examinations of the fan blades will be completed within 30 days.

But that’s going to be no small task.

LUV: A Hard-To-Love Stock
Southwest, which has built its business model around offering low-priced flights, operates the world’s largest fleet of 737 jetliners — more than 700 planes — and the engine model in question is used on most of them.

Even though the engine is produced by CFM — a joint venture between General Electric and France-based Safran SA — the major burden of cost is likely to fall on Southwest and other carriers that own the planes and the engines attached to them. The engine currently has 15 outstanding airworthiness directives (ADs), which are essentially maintenance rules mandated by the FAA, and I wouldn’t be surprised if another is added.

This incident is added stress for a company that was already seeing a margin crunch due to higher costs (oil at multi-year highs) and flat airfare rates. Analysts have been hoping for a turnaround, but this incident, combined with sky-high oil prices, may prevent the recovery most were looking for.

The trade I recently recommended to my Profit Amplifier readers is timed just ahead of Southwest’s first-quarter earnings report, scheduled to be released later today. Currently, my earnings models show the company’s EPS results falling in line with analyst estimates for $0.75. But given the fact that CEO Kelly will also have to acknowledge the impact of the incident in the report (which will likely come up again in the subsequent earnings call), I believe his forward earnings guidance will be less rosy than anyone was originally expecting. 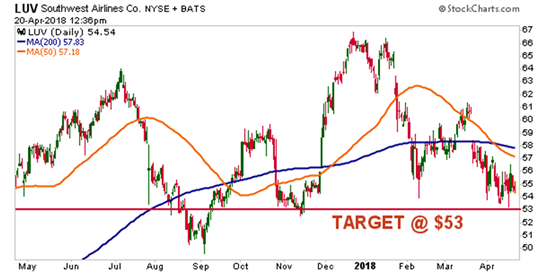 Keep in mind that this is a higher-risk trade because analysts are still mostly bullish, but I believe they haven’t yet factored in all the ramifications for this very nuanced situation.

That said, since I recommended this trade to my Profit Amplifier readers last week, LUV has already fallen past my break-even point at $54.20. From here, we just need another 0.9% drop to hit our goal and claim a gain over 20%.

How You Can Get In On Trades Like This
It wouldn’t be fair to my premium Profit Amplifier subscribers to reveal the specifics of this options trade in this article. But my proven strategy could be just what you need to make more on your trades than you thought possible.

I’m talking about returns of 31%, 35%, and more — all in a matter of weeks rather than months or years. In fact, we just closed a trade on TripAdvisor (Nasdaq: TRIP) for a clean 26.3% in just ten days.