A Smaller Stock With Big-Time Momentum

As some of you may know, I’ve spent some time recently discussing the importance of finding “under-the-radar” growth stocks.

In this article, I talked about why you should look for “catalysts”. In fact, I called them “the one thing every stock you own should have.”

And in this piece, I explained why it’s perfectly okay to swing for the fences once in a while with a smaller growth stock or two (or what I call “Game-Changers”). After all, if your portfolio is properly allocated, then adding them to the mix shouldn’t affect your overall performance too much to the downside, especially if you have a stop-loss in effect.

The upshot? Well, you could find yourself riding a hot trend to something like a 64% gain in two months, as we did here. (Or even better…)

In keeping with this idea, I want to tell you about another under-the-radar growth stock that’s riding some powerful trends that I think will lead to some nice gains in pretty short order.

Say Hello To Another “Game-Changer”

The act of “signing” documents has drastically changed over the years. That’s thanks in large part to the internet.

Leading that charge is DocuSign.

While DocuSign was founded in 2003, it didn’t go public until April 2018. The company’s electronic signature technology eliminates the need for paper… and the cumbersome steps of printing a document, signing it, scanning it, and emailing it back.

Chances are if you’ve bought a house in the past few years, you may have been surprised (and relieved) to learn that you could use a digital signature on much of the initial paperwork. You probably have DocuSign to thank for it.

DocuSign’s software eliminates the old, slow, error-prone paper-contract process. This, in turn, helps customers with a speedier, cost-saving approach to the contract and agreement procedure.

The company’s cloud-based products enable more than 530,000 customers and millions of users to quickly and efficiently create, manage, and securely sign contracts and agreements, worldwide. It commands a 60% market share, while its closest competitor, Adobe (Nasdaq: ADBE), has around 12%.

This is a company that’s not only disrupting the contract industry — but is growing at a torrid pace. In 2017, it had sales of $381.5 million. Last year it pulled in more than $700 million. That’s a compounded annual growth rate of 35.6%. And in the most recent quarter of fiscal 2019 (DOCU’s fiscal year will end on the 31st), revenue grew by 39% compared to last year.

The beauty of DocuSign’s business is that it operates on a software-as-a-service (SaaS) model. So 95% of sales are recurring, subscription-based revenue. When looking at companies that fall under this business model, a key metric is the firm’s retention rate. This tells us whether the company is keeping current customers, or needs to constantly find new ones.

Last year, DocuSign’s retention rate was 115%. That means that not only are customers staying, but they paid 15% more than they did this time last year. Keep in mind that this doesn’t mean DocuSign is charging its customers more, but rather, customers see the value of its software and buy add-ons or more subscriptions for other departments. Historically, its retention rate has ranged from 112% to 119%.

Another beauty of SaaS companies like DocuSign is that they are generally very profitable. There’s no product to manufacture, no machinery to maintain or update. So the margins are thick.

Last year, gross margins were 71.6%. It produced free cash flow of $45.7 million, a 27% increase over the prior year. And it’s produced about $222 million over the trailing twelve months.

Moving on to the balance sheet we find that the company has close to $654 million in cash, which is just enough to cover its $627 million debt load. Ideally, we’d like to see this gap widen a little more, starting with the upcoming fourth-quarter results. 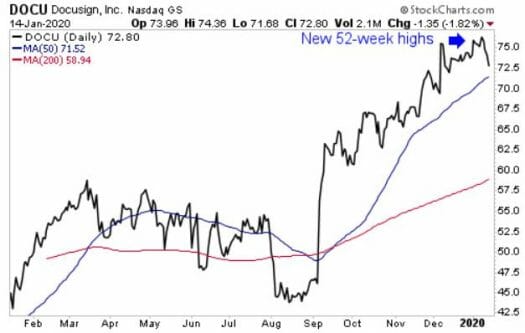 Keep in mind that the company has yet to turn a profit but is on track to do so this year (which would obviously be quite bullish). But should the company fail to hit that benchmark it will certainly be a setback, and shares could take a hit.

That said, there’s a lot to like about this company and its industry. DocuSign has a stranglehold on its market and is showing no signs of letting up. For that, investors have rewarded the company by pushing shares to recent 52-week highs. But don’t think you’ve missed the ride, as the stock has plenty of momentum.