Why You Should Still Be Bullish On Gold

If you haven’t noticed, precious metals are booming.

Silver prices have surged 140% off their March lows, soaring to a 7-year high of $28 per ounce. Gold is on a powerful streak as well, eclipsing the $2,000 level and climbing to a record peak of $2,070 recently (before retreating back a bit).

You can understand why traders have turned bullish. Back in March, when the Covid-19 pandemic was just taking hold, I wrote a two-part series making the case for gold and gold miners. (If you missed either of those pieces, you can read Part 1 here and Part 2 here.) And since then, I’ve written several times about how investors can profit. But today, I want to recap what’s going on here and reemphasize my case.

As you probably know already, the federal government has authorized over $3 trillion in emergency spending to support struggling families and keep small businesses afloat during the Covid-19 outbreak. Meanwhile, central banks are also using every stimulative tool in their arsenals to combat economic malaise.

Those coordinated efforts have driven yields on the benchmark 10-year Treasury down to about 0.6%. That’s still above zero – barely. But not when you factor in inflation expectations, which have quietly crept up to 1.5%. In “real” terms, yields have sunk to negative 0.9%, a level unseen since the European debt crisis eight years ago.

The dovish Fed is printing money to purchase tens of billions in Treasuries and mortgage-backed securities each month. Meanwhile, Congress is already working on the next round of direct cash payments and stimulus benefits.

This is all clearly visible in the changing yield spreads between ordinary and inflation-indexed bonds.

So we have unprecedented spending, ultra-loose monetary policy, runaway debt… It all points to one thing: rising inflation.

All of this explains why gold and silver are higher.

In the first half of 2020, investors pumped $34 billion into exchange-traded funds such as SPDR Gold Shares (NYSE: GLD). Those inflows – equivalent to 623 metric tons – have already topped the previous annual record of $23 billion set in 2016. 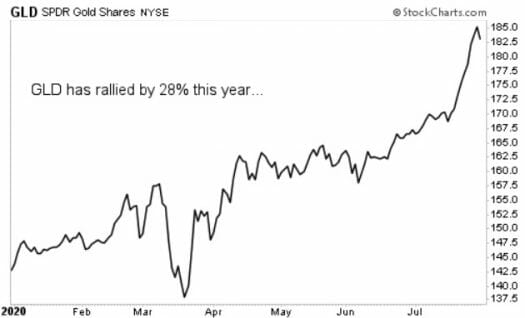 Keep in mind, you can clearly see in the chart above that gold was already on a run before Covid-19. But add it all up, and you can see why gold is streaking higher – even with equities soaring to new highs.

Should the market roll over, that would only make gold even more appealing as a safe harbor, in addition to a reliable inflation hedge.

The big boys are taking note – and advising their institutional clients accordingly. Goldman Sachs believes gold could reach $2,300 an ounce within the next 12 months. Bank of America issued an even more optimistic forecast suggesting prices could hit $3,000.

Not surprisingly, this has been fertile ground for investors. Over the past six months, shares of industry leader Newmont Mining (NYSE: NEM) have climbed from $45 to near $70. Wheaton Precious Metals (NYSE: WPM), one of my long-time recommendations in this space, has more than doubled since March. (It’s also up by about 13% since I wrote about it here in late July.)

As I’ve said before, there’s a lot more to mining than what you may see in the movies. There are test holes to drill, core samples to analyze, and geological surveys to complete. If the economics of the project appear feasible, the owners must then jump through all kinds of regulatory hoops. There are detailed environmental impact and risk assessment studies to present. There are also stacks of permits that can take years to get approved.

And that’s just to get the initial green light. Then there’s hefty royalties and sky-high taxes… Oftentimes power generating infrastructure and access roads need to be built… the list goes on.

From start to finish, it can take 12 years to bring a new discovery online and get that first ounce to market.

After years of under-investment, senior gold producers are starved for growth. They’re on the prowl for new projects that will amp up their production profile and replenish reserves. And with gold prices soaring to record highs, they are also flush with cash.

That’s the perfect set of conditions for M&A activity.

It’s far quicker (and usually more profitable) to buy promising mines that have already been scoped out by someone else than to spend a decade exploring and developing unproven sites. So there has been plenty of wheeling and dealing in the precious metals sector.

According to Reuters, we are squarely in the middle of the “biggest deal binge in a decade”. And the numbers back it up. There were 348 takeovers in this group last year worth $30 billion. For perspective, that’s triple the level from the prior year – shattering the all-time peak of $25 billion set in 2010.

I think we’ll see even more deals this year.

The good news is that you don’t have to bank on a takeover to make solid gains with gold mining stocks. There are many, many positive catalysts working in favor of these stocks — a M&A deal would just be icing on the cake.

I’ve given some suggestions for investing in this space in previous articles. But one more tip I’ll give is checking out my colleague Dr. Stephen Leeb’s latest research…