Well, that didn’t take long… On his first day in office, Joe Biden aimed his sights at the nation’s energy industry.

The incoming President will reportedly revoke permits for the troubled Keystone XL pipeline and overturn as many as 100 industry-friendly oil and gas policies that had been in force under the previous administration – among them, fracking on federal land.

This doesn’t come as a shock to the market. On the campaign trail, Biden pledged to tighten drilling regulations, discourage fossil fuel consumption, and promote an ambitious climate change agenda – perhaps going even further than his former boss, President Obama.

Clearly, there is a new sheriff in town. One who oilfield workers might argue favors environmentalism over jobs and energy independence. But that doesn’t mean demand for crude oil will suddenly disappear. We knew that back when oil prices crashed last spring, and look where we are now… 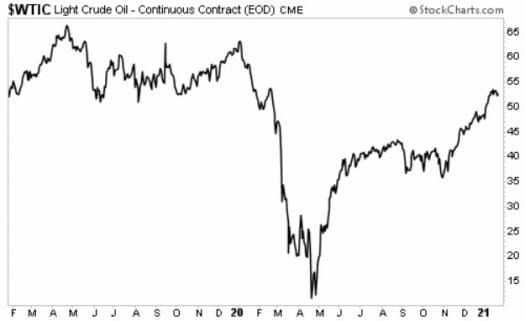 How You Should React

Given all of this, if you’re looking at the energy space today, your may be tempted to avoid it. But that may be a mistake. If you remember, back in September of 2020, I argued that investors shouldn’t write off the energy sector just yet. Fast forward to today, and oil prices have rallied about 37% since then.

Will these new regulations impact future gains for investors? Perhaps. But we will evaluate the potential impact of proposed regulatory changes as they come.

In the meantime, I’m encouraging my readers to focus on quality players that are still rallying from the historic plunge in oil prices we saw last spring — and still have catalysts in place to continue the ride.

Case in point, two weeks ago I told you about one of my favorites: Pioneer Natural Resources (NYSE: PXD). As I said back then, Pioneer has one of the lowest breakeven levels in the industry. It can turn a profit with oil prices as low as $30 per barrel. It’s the largest remaining independent pure play in Permian Basin. All the others have been taken out.

So could a Biden administration affect the outlook? Sure. But until any action taken in Washington outweighs these fundamental catalysts, your chances are still good.

On a similar note, if you recall, I banged the drum on PXD and another favorite ConocoPhillips (NYSE: COP) back in August.

A similar argument applies here. COP’s $9.7 billion acquisition of Concho Resources has just been approved by shareholders and finalized. As announced back in October, this game-changing merger will yield $500 million in annual cost savings synergies and provide billions of barrels of low-cost reserves.

Over at High-Yield Investing, we scooped this one up back in March. Our timing couldn’t have been better. Thanks to the depressed price, we locked in a 6% yield — and are currently sitting on a 52% gain. 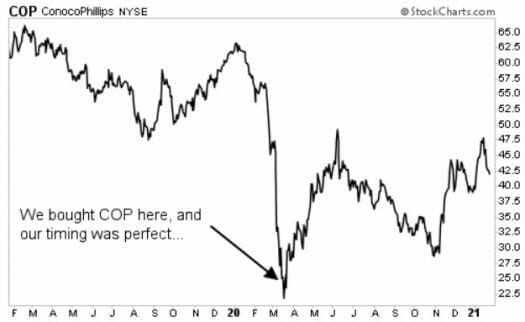 Ongoing vaccine deployments have greased the wheels of commerce and helped oil prices recover. I see much stronger cash flows on the horizon for Conoco (whose spending remains disciplined). Management intends to return 30 cents from every dollar back to stockholders via dividends.

The good news: If you missed this one, COP still offers a 4% yield — more than double the market average. Despite a more hostile White House, COP has climbed nearly 50% since the November election and should continue higher.

Editor’s Note: If you’re hunting for high yields and finding it hard to come in this market, then you’re not alone…

That’s why we’re constantly looking beyond the usual suspects over at High-Yield Investing. We’re finding yields that double, triple, even quadruple the market average. And we don’t sacrifice safety to find them, either.

If you’d like to join us in our search for the best high yields the market has to offer, then I invite you to learn more here.