It could be three… it could be four… or dare I say it, possibly even five.

I’m talking about rate hikes this year. It’s a foregone conclusion that the Federal Reserve will soon start tightening rates and unwinding other monetary stimulus measures. The question is, how far will it go?

The day of reckoning is upon us. Fed Chief Jerome Powell has finally abandoned the term “transitory” and conceded that more aggressive action must be taken.

And not a moment too soon. The closely-watched Consumer Price Index (CPI) just showed a sharp 7% year-over-year increase in December. That’s an acceleration from the 6.8% uptick in November – and the hottest reading since 1982.

Economists like to strip out food and energy costs from the calculation because they tend to be more volatile (not that homeowners get that privilege). But even then, core inflation still jumped 5.5%, the highest in more than 30 years. Many individual categories (like lodging or used vehicles) have seen increases of 20% to 30%… or more.

The famous “dot-plot” (which tracks the expectations of Federal Reserve board members themselves) shows a growing consensus that short-term lending rates will finish the year between 0.75% and 1.0%. Rates have been anchored at close to zero since the onset of the pandemic.

So this chart is signaling that we could see at least three quarter-point increases by the end of 2022. 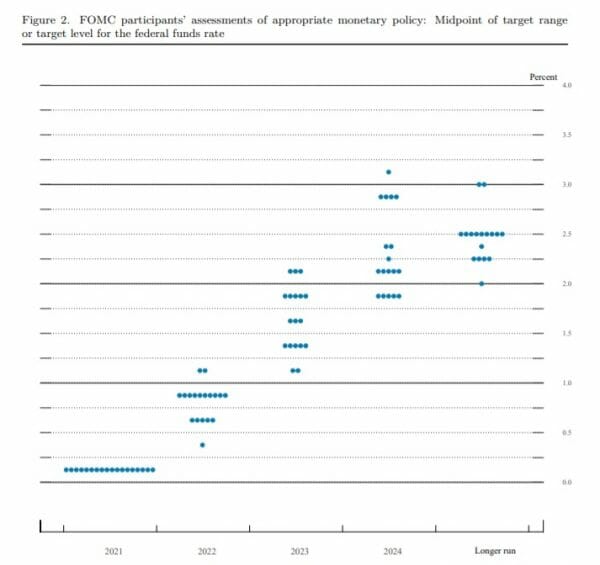 But that may not be enough according to many influential economists and financial gurus.

“We continue to see hikes in March June and September, and now we have added a hike in December, for a total of four.”

“It’s possible inflation is worse than they think. I’d personally be surprised if it’s just (emphasis mine) four increases.”

If anyone can be thought to have a good read on interest rate policy, it’s Dimon. So words like this were sure to send shockwaves through the market.

We Saw This Coming…

But none of this is really news to us over at High-Yield Investing. I’ve been preaching about the growing threat of inflation since March of last year. From the first signs, I warned that this wasn’t likely to be temporary. And while I certainly wasn’t trying to be alarmist by calling for “hyperinflation,” I did warn that it could get a lot higher than most people thought.

For example, back in May of last year, I pointed to the unprecedented growth in the M2 money supply:

The M2 money supply (which includes physical notes in circulation, savings accounts, and bank reserves) surged from $15 trillion at the start of 2020 to nearly $20 trillion today.

In percentage terms, we haven’t seen a flood of new money like this since 1943 in the middle of World War II. John Greenwood, Professor of Applied Economics and Chief Economist at Invesco, referred to this sudden expansion of money as a “looming danger for the economy.”

I also gave a few tangible steps that investors can take. Consider this advice I gave in another article back in May of last year:

For starters, I recommend keeping at least a small portion of your assets denominated in something other than greenbacks (precious metals, for example). Hard assets like land, timber, real estate, and commodities can also be reliable inflation hedges.

Treasury Inflation-Protected Securities (TIPS) are an obvious choice. While the coupon rate attached to these securities is fixed, the principal is not – it’s indexed to the CPI and appreciates in lockstep with inflation. As the principal increases, naturally so do your semi-annual interest payments. And they are backed by the full faith and credit of Uncle Sam.

At maturity, you receive either the original face value of the instrument or the inflation-adjusted principal, whichever is greater. As an added bonus, income and gains are exempt from state income taxes.

Navigating these transitions can be tricky for investors. But it can be done.

I’ll say this… it will be nice when the dust settles and income hunters can earn more than a paltry fraction of a percent on short-term securities. Of course, it’s not nominal rates that really matter, but real (i.e. inflation-adjusted) rates.

We’re also beginning to see a rotation taking place in the market. Expect to see continued emphasis on asset classes that shine in this environment, such as banks and low-duration floating rate bonds.

Here’s the main thing you need to keep in mind: History has repeatedly shown that quality dividend-paying stocks are the best way to stay a step ahead.

That’s one reason why our High-Yield Investing portfolio value has just touched a new high.

It’s never been more important to have a stable of high-quality dividend payers in your portfolio. My staff and I are here to help – and that’s why you should check out our latest report.

In it, you’ll find full writeups of five of my favorite dividend payers. Each one of these “bulletproof” securities has a proven history of rewarding investors with higher payouts each and every year – no matter what else is going on in the market.