For the past couple of months, I’ve been telling readers about the opportunities that lie in the energy sector.

In short, I’ve been calling for another major “oil boom” that could hand investors some major profits in the months and years to come.

This wasn’t just idle talk. In December of last year, I talked about how my premium subscribers and I scored a big win by betting on oil’s comeback by adding Pioneer Natural Resources (NYSE: PXD) to our portfolio in May of 2020.

Back then, a lot of “experts” thought oil was down for the count. But as I write this, we’re up by about 139% on PXD over at Takeover Trader – and that could be just the beginning…

You see, I think we’re about to see a flood of new drilling activity centered around the Permian Basin in West Texas. And what’s more, we could see a massive wave of deals, whereby larger energy players try to gobble up as much productive acreage as they can – acreage that’s owned by smaller, independent producers in this region.

I detailed my reasoning in this article, which is pretty simple:

And while the Permian Basin has relinquished 30 billion barrels (give or take) so far, the U.S. Geological Society estimates that there are still 46 billion barrels of recoverable oil reserves and 281 trillion cubic feet of natural gas still waiting underground.

That not only makes the Permian the most fertile ground for future drilling activity – but also M&A deals – that we’re likely to see in our lifetimes.

In both of those previous articles, I also mentioned that investors were spooked by the new Omicron variant of Covid. Prices were in the $80 region before dipping into the mid-$60s, and this just didn’t align with the larger dynamics in play. You can see what happened next… 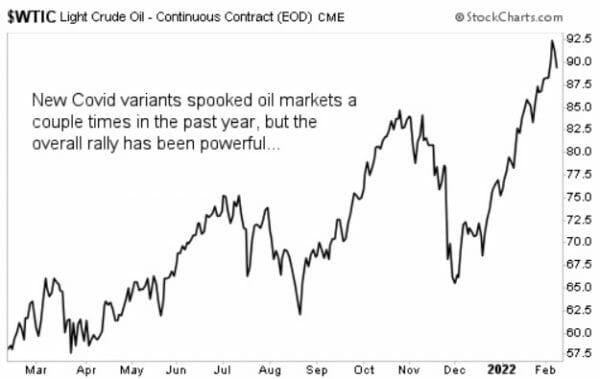 Needless to say, $90 oil changes the calculus for capital spending priorities. New projects that might have been marginally profitable 12 months ago will gush cash at this level and generate highly attractive returns. The collective response from producers has been just what you would expect: it’s time to throttle up.

Nationwide, the rig count in the hunt for new oil has doubled from 245 to more than 600.

And most analysts agree that this number is headed sharply higher.

Meanwhile, the flood of surplus inventory has receded dramatically. A year and a half ago, land-based storage facilities were overflowing and excess oil had to be stored in ocean-going tankers. Not anymore.

By late October, national oil inventories dwindled to just a three-week supply, the lowest level in three years. At the main storage hub in Cushing, Oklahoma, supplies dropped by 4 million barrels in a single week recently, the product of heavy demand from South Korea and other Asian buyers.

Cushing’s giant tanks are half-empty now, depleting to just 30 million barrels. Not long ago, there were more than 60 million barrels of reserves sloshing around. The market isn’t oversupplied anymore. Quite the opposite. This should provide ample support for higher prices even despite more production. I’m even starting to hear more and more chatter of a possible supply deficit. 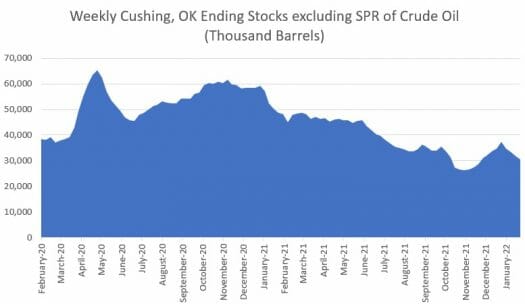 Suffice it to say, this story is far from over. And there will be plenty of ways for investors of all risk appetites to profit…

Pioneer, for example, could have plenty of room to run – especially if oil prices stay high. The company is sitting on some of the best acreage in the Permian and has plans to complete more then 500 new wells this year alone.

If you’re looking for income, I talked about why investors should consider master limited partnerships (MLPs) in this article. After all, it’s tougher than ever to get regulatory approval to build new pipelines – and that puts the existing players with the expertise and extensive networks in a prime position to get this stuff where it needs to go.

I even shared one of my favorite names — Enterprise Products Partners (NYSE: EPD) – in this piece.

The point is, there’s no shortage of ways to play this major trend. But I think I’ve found one of the best ways to profit…

I just released a report about the massive wave of big-time energy deals we’re likely to see in the coming months – including my top target.

This small company is sitting on top of one of the largest finds I’ve ever seen… By getting in now before the rumor mill picks up, investors have the chance to pocket triple-digit gains, practically overnight.