With “Stagflation” Fears Rising, Gold Is Primed For Another Major Run…

A few days ago, I had an exchange with my colleague Brad Briggs. In that interview, I used a term in passing that might have caught some people off-guard.

To recap, stagflation is when you have high inflation, rising unemployment, and stagnant demand. And it’s practically a nightmare scenario, because there just isn’t a whole lot economists can do about it.

I brought up the recent Q1 GDP report, showing the economy shrank by 1.4% on an annualized basis. By standard definition, another quarter of declining growth would put the U.S. economy in a recession.

Now, I don’t know whether it will happen this quarter. But signs are beginning to emerge that consumer activity is indeed beginning to slow.

I’m also not saying we’re in a “stagflation” environment right now. But if the Federal Reserve continues to aggressively hike interest rates, it will eventually slow down the economy. The unemployment rate will rise. The hope, however, is that both of those won’t be by too much — but just enough to bring down inflation.

Either way, the list of ingredients is building up. And I’m not the only one who thinks so. Former Fed Chair Ben Bernanke said as much in a recent interview with The New York Times:

“Even under the benign scenario, we should have a slowing economy,” he said. “And inflation’s still too high but coming down. So there should be a period in the next year or two where growth is low, unemployment is at least up a little bit and inflation is still high,” he predicted. “So you could call that stagflation.”

Now, whether this comes to pass or not is anybody’s guess. But I think the chances are decent. What I can tell you, though, is what typically happens during periods of stagflation…

The Case For Another Big Run In Gold…

As most folks know, in August 1971 President Richard Nixon announced that the United States would no longer convert dollars to gold at a fixed value. In other words, we completely abandoned the gold standard.

We’re still feeling the ripple effects of that decision today…

Now before I go any further, there’s always been a lot of consternation surrounding gold and going off the gold standard, with some proponents suggesting that we go back to gold.

I’m not here to debate any of that. The fact is we’re no longer on a gold standard. And going off the gold standard allowed the U.S. government to print as much money as it needed. It also forced investors into holding assets like stocks, corporate bonds, real estate, and precious metals.

After all, holding U.S. dollars over long periods made no sense (and no money).

However, gold has always been seen as a “safe haven” and as a store of wealth. This is especially true when the government is inflating its money supply to pay for things like wars, bailouts, social programs, and anything and everything else.

Of course, the companies that own and mine these precious metals are massive beneficiaries when gold prices jump. Shares of mining companies can easily double, triple, or quadruple as nervous investors rush to gold.

Just look at the 1970s… precious metal stocks soared. Back then, growth was slow, people were losing their jobs and inflation skyrocketed. Gold soared more than 400% in just four years. And it went up more than 2,300% over the decade.

Although we’ve seen some volatility in the spot price of gold, all of the ingredients are in place for continued rising prices. Tailwinds include rising inflation and geopolitical risks (namely the war in Ukraine), and the Fed rate hikes, which many assume will send the U.S. economy into a recession.

[Related: Why 2022 Could Bring A Major Comeback For Gold] 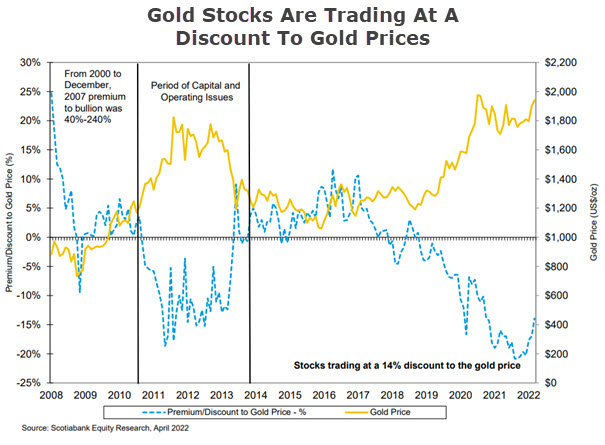 This is good news for mining stocks, as it indicates there’s plenty of room for them to rocket higher. Because when gold prices go on a run, the gold miners usually do even better…

I want to point out something, though, which is that the costs to pull gold out of the ground have increased as interest rates rise (making it more expensive to service debt). Then, of course, you have higher fuel prices, increased equipment costs, and supply chain hiccups.

As a quick refresher, AISC is a key metric for miners to help determine how profitable the company will be. It tells us exactly what it costs for a mining company to produce one ounce of gold.

Obviously, the production costs need to be less than the price of gold. The wider the spread between AISC and gold prices the more profitable it is for the company. You can see the AISC for the two largest gold miners below…

An ounce of gold is currently going for around $1,870 per ounce, which is down from its peak of $2,050 an ounce in March. So while costs are mounting, there is still plenty of meat left on the bone, especially for the top-tier operators in this space.

Now, before I go any further, I’m not necessarily saying we’re going to see a period of stagflation like the 1970s or that gold is going to go on an epic run like it did then.

But the good news is, it doesn’t have to..

Consider this… back in late-2015, the Fed raised interest rates for the first time in seven years. That kicked off a new cyclical bull market in gold, sending prices from around $1,050 per ounce to about $1,350 in just eight months. One of the picks we own over at Capital Wealth Letter, meanwhile, jumped 127% during that period.

So even a strong run in gold prices should lead to impressive gains.

Remember, the gold miners should outrun the price of gold in a bullish gold market. That’s why we also recently added another gold miner to our portfolio…

I can’t get into the specifics of the pick today, but I encourage you to research the gold miners more if you’re interested. (And remember, use AISC as your key metric for evaluating the miners.) Or, if you want to own a broad basket of gold miners, then take a look at the VanEck Gold Miners ETF (NYSE: GDX).

P.S. Investors who want to profit from inflation or “stagflation” would be wise to look toward other commodities, too. And with oil over $100 per barrel, there’s still time to profit from “black gold”…

With enough oil to independently power America for the nest 49 years, you won’t see this covered on the nightly news… But some heavy hitters are making making big investments in this area — and this little-known company stands to profit the most. Go here for details now.