Many may know the story by now. But the evolution of Bitcoin has been impressive…

In August 2008, someone anonymously registered the bitcoin.org domain name. It was the first known appearance of the word “bitcoin.” Then in October 2008, a computer coder going by the name of Satoshi Nakamoto published a white paper describing the basics of Bitcoin.

While we don’t really know the true identity of Satoshi, the real importance is that he developed a solution to the problem of trust with traditional currencies.

He developed a new form of money.

Today, Bitcoin is the most well-known and popular cryptocurrency. This digital asset isn’t issued or controlled by any person or government. And it operates completely outside of the banking system.

This is paramount in a world under increasing assault by hackers, identity thieves, and government surveillance. And it is helping fuel the use of private digital “cryptocurrencies.”

I could go on and on. But the point is that Bitcoin (and cryptocurrency in general) may be the most fascinating and controversial development in money and finance in generations. And the underlying blockchain technology has the potential to revolutionize aspects of our economy, upending many established companies, and even entire industries.

The reason I’m bringing this up today is because, as some of you may know, we’re stepping up our coverage of cryptocurrencies over at my premium service, Capital Wealth Letter.

While our primary focus will continue to be finding and recommending wonderful companies that are trading at reasonable prices, I told our readers back in January that we owe it ourselves to devote some time and space to cryptocurrency. Here’s what I told readers back then…

I firmly believe that the value creation made possible by the blockchain has only just begun. And it will unlock enormous opportunities — opportunities that I feel obligated to share with you.

Make no mistake, bitcoin may be the most fascinating and controversial development in money and finance in generations… if not centuries. And the underlying blockchain technology has the potential to revolutionize aspects of our economy, upending many established companies — and even entire industries.

The only question is… will you keep an open mind and evolve? Or will you stand rooted in your first assessment of the technology and watch it pass you by?

The Big Gains Aren’t Over…

Outside of the exciting future that Bitcoin and blockchain technology hold, is just how fast the currencies have appreciated.

For example, last year, in our annual predictions report, my team and I recommended that investors take a look at Ethereum. It went on to soar 398% in 2021. And for every example like this, I could cite dozens of smaller coins that posted mind-boggling returns last year. 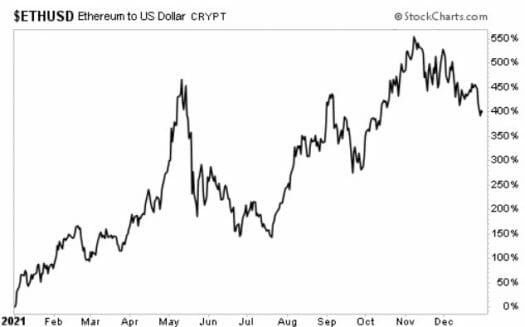 Of course, ETH has retreated this year, but I still like it for the long run. And Bitcoin, too, for that matter. (I wrote about the basics of Bitcoin, and why I’m bullish, here. And I did the same for Ethereum here.)

I’ll have much more to say on both of them in the weeks and months to come. But in the meantime, there’s another cryptocurrency that my team and I like. It’s far less known than either of those names, yet it may ultimately prove to have just as much upside as either one of them…

Similar to Ethereum, this crypto network describes itself as an “open, programmable smart contracts platform for decentralized applications.” Adoption of this network is increasing, with more than 478 projects built on the platform in the past 20 months. And its exceptionally fast settlement time and lower costs than alternative blockchains have investors extremely interested. In fact, its platform is said to be able to handle 4,5000 transactions per second. For comparison, Ethereum’s transactional throughput is 14 transactions per second (though, as I wrote recently, that will soon be changing, too).

This upstart digital currency is just catching the attention of investors, but there’s plenty of time to hop on board and ride it to massive potential gains. Unfortunately, I can’t share the name of this pick with you right now, out of fairness to my premium Capital Wealth Letter subscribers. But whether you’ve dabbled in cryptocurrencies already, or are curious about learning more, here’s what I want you to take away from this…

The cryptocurrency world is constantly evolving. And the next big thing is right around the corner…

My followers and I plan to be there when it happens. But, it’s important to remember that cryptocurrencies are speculative at this point. The ride will be volatile, so don’t bet the farm on these plays. But it’s still worth learning about this space — and even dipping your toe in the water as long as you feel comfortable. Because the potential upside here is just too good to ignore.

In the meantime, you can learn more about my latest predictions (including this under-the-radar cryptocurrency pick) by clicking here now.