Ethereum 101: Why Developers Love It… And Should You Invest Now?

A couple of months ago, I told readers that we were “getting serious” about cryptocurrencies over at my premium advisory, Capital Wealth Letter.

As I explained back then, our primary mission remains on equities, and that isn’t going to change any time soon. But we’d be doing our readers a disservice if we didn’t broaden our scope to cover this exciting new frontier at least a little bit.

I’ve already dipped our toes into the cryptocurrency waters, starting with a primer on bitcoin, followed by a piece in which I addressed some frequently-asked questions about cryptos, and most recently a discussion about NFTs.

Today, I want to pick up where we left off by talking about arguably the second-most popular cryptocurrency: Ethereum (ETH).

This will by no means be an exhaustive summary or investment case for ETH. Instead, I want to focus on the basics… how it works, what makes the network so appealing (and why you should care), and how an imminent upgrade could be a “game-changer”.

Before we dive into the inner workings of Ethereum, I want to clarify something…

It can get confusing as people talk about Ethereum (the network) and Ethereum the cryptocurrency, which is called “ether.” To add to this confusion, when you go buy ether on a platform like Coinbase it’s called “Ethereum.”

But the correct terminology should be that when we talk about Ethereum, we are referring to the blockchain network. Ether is the currency, or “fuel” that powers the Ethereum network.

With that said, let’s take a closer look…

Developers Love ETH – And Why That Matters

Unlike most cryptocurrencies, Ethereum has real value. Each transaction that the Ethereum blockchain enables requires a transaction fee that users must pay with ether.

Ethereum is the platform of choice for many blockchain app developers. For example, if you wanted to purchase or sell an NFT, you could go to the website OpenSea, which is a marketplace for crypto-collectibles and rare digital items. The OpenSea marketplace is built on the Ethereum network.

Developers are choosing Ethereum as the operating system of choice for blockchain apps because it has a first-mover advantage (founded in 2015), is decentralized enough compared to its competitors (roughly 9,000 computers operate the Ethereum blockchain), and its implementation of smart contracts is best-in-class. This all points towards Ethereum continuing to grow and dominate.

Similarly, building an app on top of an existing blockchain like Ethereum is far less complicated than building an entire blockchain protocol from scratch.

Not only does the Ethereum network have the largest base of developers pushing the envelope on innovation, but it has become the home of many major decentralized finance (“DeFi”) projects — a trend with surging momentum behind it.

So as more and more people build, develop, and use the Ethereum network, they will need the token or currency that powers the Ethereum platform, which is ether.

Remember how I said (above) that Ethereum actually provides value? It provides that value by being the “operating system” of choice for developers. In order to utilize Ethereum’s blockchain, you have to pay a transaction fee — known in the crypto world as “gas prices.”

Early on these gas prices were pretty small, because there wasn’t a ton of demand on the Ethereum blockchain. But as you can see at the end of 2020, these transaction prices started to climb and have seen some massive spikes.

While elevated gas prices are a good indicator of how strong demand is, it is also troublesome. High prices discourage further app-building on the Ethereum blockchain, providing a window for its competition to steal market share.

Ethereum’s biggest competitors right now are Polkadot, Solana, and Cosmos. Although Ethereum still crushes its competition – it’s 2.8 times larger than its closest rival, Polkadot, as of this writing.

If you have been around for a while in the crypto world (or even as you begin to learn about the crypto world), then you’ve probably heard (or will hear about) Ethereum 2.0. This is an upgrade to the network that’s promised to be a game-changer.

This upgrade, which has been gradually rolling out, is designed to improve the speed, efficiency, and scalability of the network.

In short, this upgrade will clearly set Ethereum 2.0 apart from its peers.

The bump in transactions per second will allow the community of developers and apps built on the Ethereum platform to keep growing without limit. And help alleviate the high gas prices, which in turn should drive demand for ether to pay for these transactions.

Should You Invest Now?

Longtime readers may remember that we talked about ETH a bit in 2021. I even wrote about it in my annual predictions report, saying “if there’s one cryptocurrency out there we had to choose right now… it would be this one.” 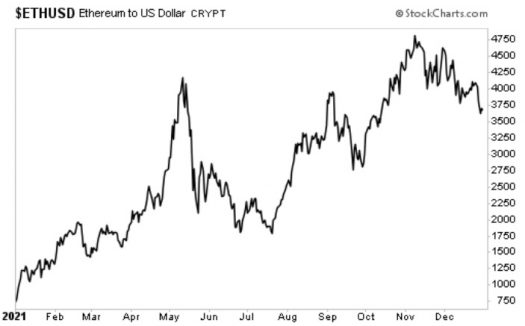 Of course, prices have fallen since then (to about $2,700). Which brings me to my next point…

While this could turn out to be one of the most disruptive technologies in decades, make no mistake that this is still a very speculative investment. Expect this to be a roller-coaster ride with big highs and some sobering lows.

But the potential upside is massive. And the returns could be spectacular.

Now, if you do follow my advice and buy Ethereum, please size your position accordingly. In other words, don’t bet the farm… Take a smaller than normal position.

To purchase Ethereum, you’ll likely need to open an account on a crypto platform like Coinbase, Kraken, Binance, or Gemini.

There are a lot of different ways to buy and store your cryptocurrencies. Over time, I will cover some of the different aspects of crypto exchanges and wallets, etc. But if you’re just starting out, the easiest and most common way to dip your toes into the cryptocurrency world is through a centralized exchange like Coinbase.

If you want to see a step-by-step guide on what that entails, I have a premium report that we’ll be publishing soon that will walk you through the process.

P.S. I just released another BIG prediction about cryptocurrencies…

My team and I think cryptocurrencies will surge again in the coming months. But here’s the thing… the big winner won’t be Bitcoin, Binance, or Ethereum. While those cryptocurrencies could do well, we think there’s another one with a lot more upside potential for new investors. It’s 321 times faster than its prime competitor and could surpass it in value…