His take in that piece was simple… He said that despite any reservations you may have about the company, this is likely to be a good buying opportunity for investors. He also mentioned that I was updating my Top Stock Advisor premium subscribers on the situation as well. (For those who don’t know, Facebook has been a Top Stock Advisor holding since mid-2016.)

So after sharing my thoughts with premium readers, I thought it might be worthwhile to share them with the rest of our audience. After all, Facebook is a widely-held stock. And as you’ll see in a moment, my key rationale for continuing to hold the stock has remained largely the same through the years.

You see, up until now, Facebook has been a dominant giant that continued to grow and reward shareholders year after year.

So has anything changed? Keep that question in mind as we dive into what’s going on right now…

As you may have seen in the headlines, Facebook (Nasdaq: FB) is back in the spotlight. And it isn’t pretty.

An investigative piece by The Wall Street Journal dubbed The Facebook Files, revealed some deep flaws in the social-media giant and its subsidiaries, namely the photo-sharing app Instagram.

The Facebook whistle-blower who leaked the documents to the Wall Street Journal was revealed. Her name is Frances Haugen, and she was a product manager on Facebook’s Civic Integrity team, and her interview on 60 Minutes is worth the watch.

Oh, and to let’s not forget that Facebook management is once again being grilled by Congress.

Shares of Facebook have fallen by nearly 17% over the last month. 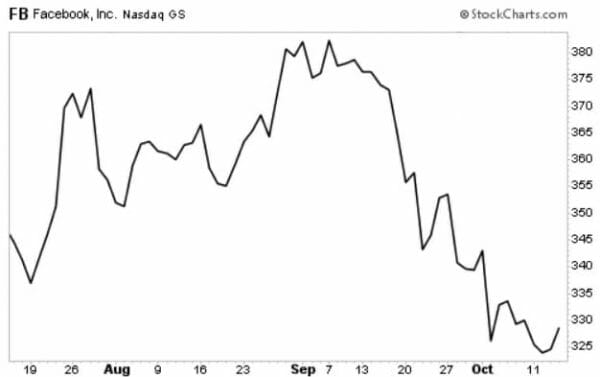 Despite all this terrible news and all the faults of Facebook’s business practices (which I don’t condone), I still rate the stock as a “Buy.”

Why? Well, if you’re a longtime reader, then you know I’ve been singing the same tune on Facebook since 2016. When I originally added the company to our portfolio, I used it as an example of “learning my lesson” and not counting out an innovative company by thinking that it’s best days of growth are behind it.

In 2018, I weighed in on one of the recent controversies surrounding Facebook. Here’s what I said:

The company has been in the spotlight ever since news broke last month that data-analytics firm Cambridge Analytica improperly used the private data of more than 87 million Facebook users.

That news, coupled with an overall market decline, shed more than $98 billion in market capitalization. Shares are down roughly 17% from their February highs.

This has triggered a flood of emails from readers wondering if it’s time to bail. But… let’s look at why we bought the stock in the first place and see if the story has changed…

Spoiler alert: it hadn’t. The fundamental thesis remained intact. I said that as long as a substantial number of users don’t delete their accounts, this is a company I want to hold onto. They didn’t, and I did. I also said that I thought Facebook would climb back to $200 a share. If you look up the share price today, you’ll see it did just that, and then some…

Fast-forward to early January of this year. The Federal Trade Commission (“FTC”) and 48 attorneys general announced that they were seeking to potentially break up the social media titan over alleged monopolistic behavior.

As I said back then:

Again, I’m not a legal expert and I won’t get into the finer points of this, but their claim essentially boils down to this… If they had known how big and successful Facebook’s other services like Instagram and WhatsApp would have become, then they wouldn’t have allowed Facebook to acquire them.

Obviously, that’s not a great argument. Nonetheless, at this point, it seems Facebook will likely have to pay some fines. That’s something the company can do easily with its $55 billion war chest of cash.

I went on to say that in the supposed worst-case scenario… i.e. Facebook gets broken up, it would arguably unlock tremendous value for shareholders. I didn’t see that happening then, and I don’t see it now. But we’ll see…

I could go on and on with examples like this. But the point is that every time bad press comes around for Facebook, it seems to sell off… and then the company goes right back to delivering impressive growth, quarter after quarter.

Facebook is a bit of a contradictory investment for me personally…

You see, I don’t personally have a Facebook account, and quite honestly a lot of the stuff that has come out about the business isn’t surprising at all. Society would probably be better off, and healthier, if Facebook didn’t exist at all, in my opinion.

But it does exist. And it happens to be a wonderfully dominant business that makes a bundle of money and has been a great investment for us since I originally recommended it back in June 2016 — up 181% since then, compared with the S&P 500’s 107% return. 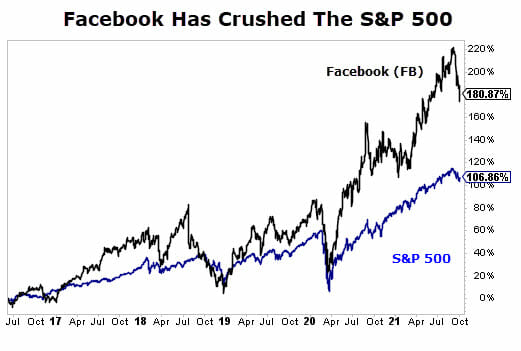 But despite all of this recent controversy, here’s what you need to keep in mind…

Facebook is an advertising juggernaut, with various other subsidiaries that could eventually develop into big money makers (like virtual reality). Its platform is relied upon by businesses of all sizes, but is especially important to smaller businesses that don’t have large marketing budgets.

If you haven’t heard of Starlink yet, get ready. It’s the latest brainchild of billionaire entrepreneur Elon Musk… And after extensive beta testing, it’s about to go “live” soon.

And even though Starlink is “off limits” to regular investors, we’ve uncovered a “silent partner” that gets you in on the ground floor… lightyears ahead of other investors. Go here now to see how you can get in on the action.